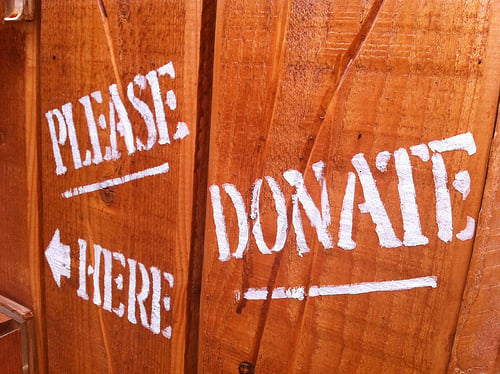 Driving engagement and donations and raising awareness is the mission of every nonprofit, but dedicating a single day to these goals can really amplify a nonprofit's typical efforts. With so much success on Giving Tuesday last year, we want to make sure you’re ready to make a big impact on December 3.

Giving Tuesday highlights several organizations that ran a variety of successful campaigns last year, and we found some common best practices these groups used that your nonprofit can apply to your efforts this year.

Giving Tuesday is strategically following the two biggest spending days of the year: Black Friday and Cyber Monday. So, why not leverage these two days and identify how an individual can contribute the money they saved from shopping to impact your mission? Equate specific dollar amounts to tangible items one can donate to an individual, project, or program. You can even create a catalog of gifts like Heifer International did for its campaign last year.

In 2012, Heifer International highlighted statistics about Black Friday and contrasted them with the value of their charitable gifts in an infographic: 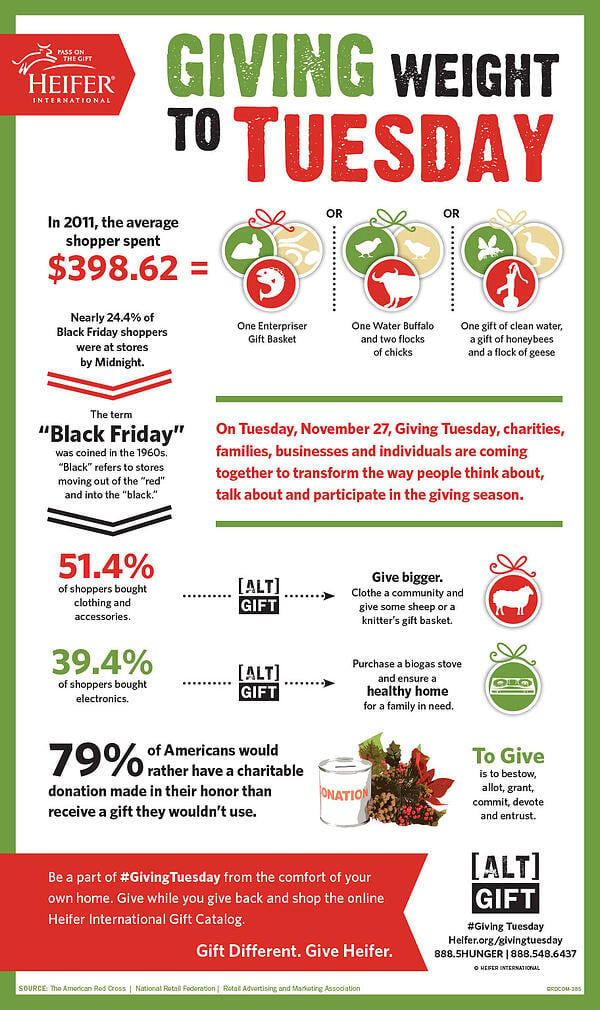 3) Use programs you already have to help amplify your campaign.

Unilever used its existing networks, including its influencer outreach, consumer website, and employee programs, to amplify Giving Tuesday. Make sure to think about all your different groups within your network that could participate. It’s not just about asking your donors for money on one day. It’s about growing the Giving Tuesday movement and encouraging more people to give back in a variety of ways.

4) Communicate your campaign through multiple channels.

Unilever hosted a Twitter party featuring Feeding America and Giving Tuesday on the day of to spark the conversation online and spread awareness of their mission. It also created a blogging advocacy program, mobilized its brand partners, and engaged members of its online community, makinglifebetter.com to amplify Giving Tuesday. Other organizations, like Panthera and World Concern, sent a series of emails to their existing networks over several weeks leading up the day, getting people talking about Giving Tuesday before it even happened.

5) Motivate your staff to get involved with a kickoff event.

Motivating your already-inspired staff on one day is a great way to get them involved. Unilever had a kickoff event with a panel discussion of experts on the topic of hunger. Some of the staff also volunteered their time at a food bank on Giving Tuesday to see the fruits of their labor.

6) If you’re a national organization, unite your chapters to make a larger impact.

Unilever launched a company wide food drive to support local food banks and Feeding America. For the first time, its 26 sites came together around one campaign and raised over 13,000 pounds of food and care items on Giving Tuesday. If your organization has chapters all over the country, think of ways to unite them, whether its online or in person.

7) Partner with a foundation, company, or major donors to match donations.

This was one of the most common tactics used by nonprofits last year. Panthera partnered with the Recanati Kaplan Foundation, which pledged to match every donation made to Panthera on Giving Tuesday. The group raised $89,000 online and $400,000 from major donors, which was matched by Recanati Kaplan to bring the organization to just under $1 million raised on Giving Tuesday.

If you’re not able to find someone to match every donation made on that day, finding just one major donor, like Give Kids the World did with one matching gift of $10,000, and telling donors they can “double their impact” will encourage regular donors to give that day.

Give Kids the World engaged its social networks to participate by taking pictures of a "2" on their hands as a symbol of doubling their impact on Giving Tuesday and posting the pictures online. They not only share it with your organization, but also with their social networks, extending your reach even further. These are great photos to use for this year’s campaign. 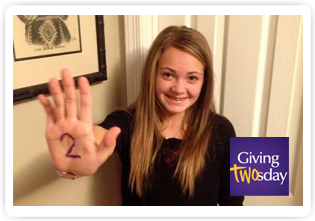 Once you become a partner of Giving Tuesday, you’re provided with a number of resources for your campaign, including social media cover photos and images to share. Dedicate your Facebook and Twitter accounts to Giving Tuesday two weeks before the day, as Give Kids the World did last year, and get the word out early. Make sure you use the hashtag #GivingTuesday to add your voice to the bigger conversation.

It’s never to early to start planning and promoting Giving Tuesday. Since you have a little more than a month to go, aim for the first week of November to start talking about the campaign. World Concern started promoting Giving Tuesday two weeks early last year and raised $17,000 leading up to the day -- and then another $29,000 on the day of. In comparison, the group raised $1,000 on the same day in 2011.

Giving Tuesday isn’t just about raising money. It's also about spreading the idea of giving back, telling people about your mission, and raising awareness. It’s also about the people you serve and impact.

Phoenix House, a national organization helping men, women, and teens overcome addiction, asked its networks to write letters of encouragement to the people in its treatment programs. The group had a template letter on its website for people to download, customize, and send back to the organization, which then delivered those letters on Giving Tuesday.

From its efforts, the group gained a lot of media attention and was included in articles on Mashable and the Huffington Post.

12) Make the ask on social media, even if you never have.

Whether you have a big or small social media following, make asks on your accounts on Giving Tuesday, as donations that day are driven mostly online via social media. Give Kids the World did this for the first time last year, which contributed to it reaching its $10,000 goal, that was then matched by an anonymous donor.

How is your organization participating in Giving Tuesday this year? Share your story below!