Will Amazon Take Over the Digital Ad Space? [New Data]

A new report from CNBC says that many advertisers are shaking up their digital budgets, and dedicating more money to Amazon ads.

According to the report, some of these advertisers are reallocating as much as half of the money they previously dedicated to Google search ads, to Amazon: a shift that reflects a few key findings on the growth of Amazon's ad platform in recent months.

Amazon is now the third-largest digital ad platform, behind Facebook and Google. And according to Ben Winters of Ideoclick -- a company that works with companies to optimize online sales -- Amazon's ad revenue is growing at 5X the rate as Google's.

But can Amazon really overtake two large competitors -- Facebook and Google -- in the digital ad space? The answer to that question could depend on two things: User behavior, and how it could change over time.

To find out what that looks like, we decided to gather some data. Here's what we found.

Where Are People More Likely to Buy?

We asked 834 internet users across the U.S., UK, and Canada: Have you ever bought a product based on an ad you saw online? 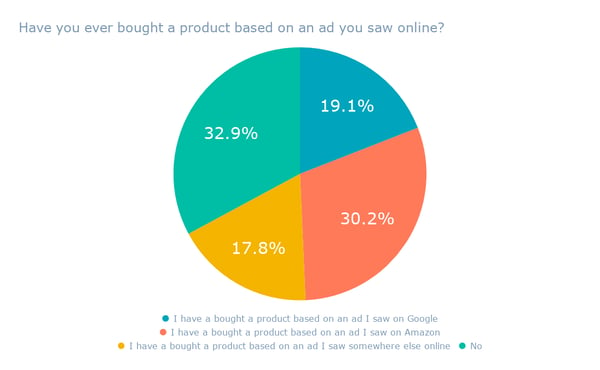 To dig a bit deeper into the results, let's think about user intent. Here are the ads that result from a search for "best dog food" on Google: 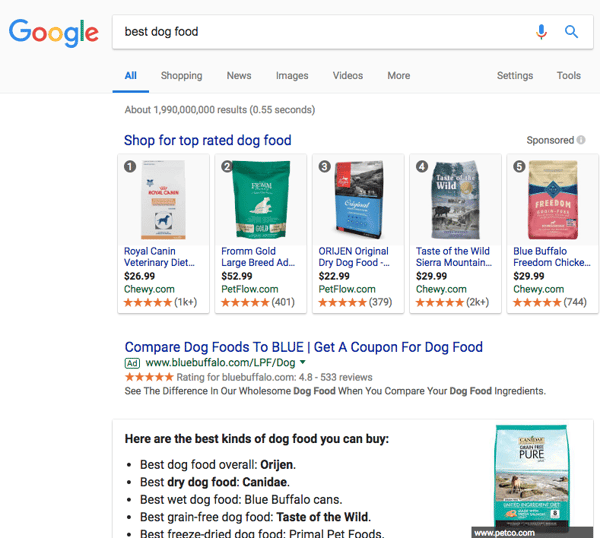 The results on both platforms lead with sponsored products. But here's the thing: On Amazon -- a site essentially dedicated to online shopping -- it's more likely that I'm searching for something like "best dog food" with the intention to buy it. On Google, conversely, it could be that I'm just looking for information.

It could be argued, too, that ads are a bit more native on Amazon. When users search for a product there -- and nearly half of all online product searches begin on Amazon -- they typically expect to see a list of products in the results. On Google, that might be different, and users might expect to see information over product listings, making sponsored results more salient, and less cohesive with the rest of the search experience.

Even if Amazon does take the lead in U.S. digital ad spending over Facebook or Google, it appears to be a long-tail victory. 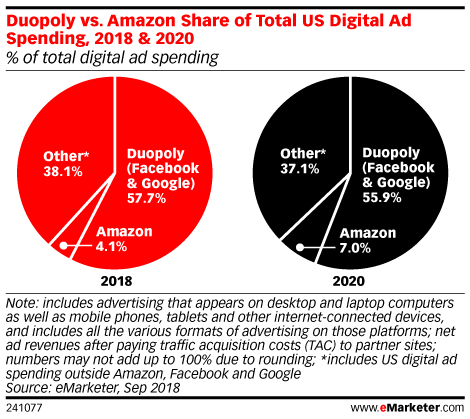 As per the chart above, eMarketer’s predicts that through 2020, Amazon will see its ad revenue growing by about 50% per year, growing its market share from 4% to 7%.

But even if that somewhat impressive, projected growth comes to fruition, there will still be a considerable gap between Amazon's digital ad revenue market share, and the percentage owned by Facebook and Google.

There's reason to believe Amazon's share in the digital ad spend market will continue to grow, however, even if gradually. That could be especially true if Amazon can scale its video ad offerings, potentially positioning it as a threat to Facebook's own video ad platform and the Google-owned YouTube. 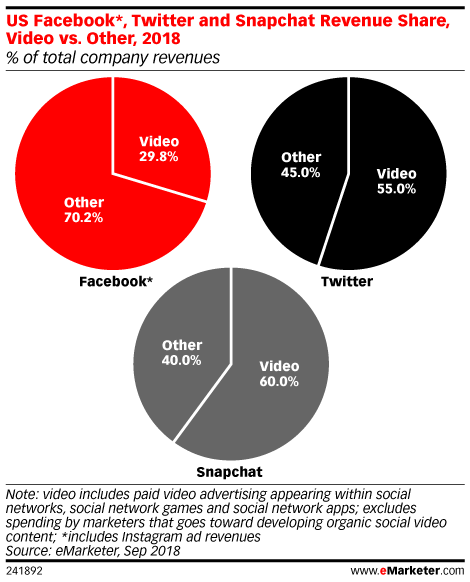 In any case, Amazon's ad platform shouldn't be ignored by marketers and small-to-midsize businesses, even if its growth is slow and steady. As a start, advises IdeoClick's Andrea Leigh, look at where your brand has a larger or engaged audience, and figure out how that could eventually lead to an Amazon advertising strategy.

"If you have a social following, or do a lot of events, you can send that audience to Amazon," she says. "We call that ‘juicing the flywheel.’”

But in the end, know that it's good news. As more platforms compete for advertiser dollars, it could come down to which one provides the best experience and ROI for them -- which, if approached with the right growth mindset, can ultimately work in your favor.

Over 50% of U.S. Households Will Have Amazon Prime Memberships in 2019

Ecommerce Wars: Who Are the Top Online Retailers This Holiday Season? [New Data]

How Do People Really Feel About Amazon's Big Announcement? Here's What We Found Out.