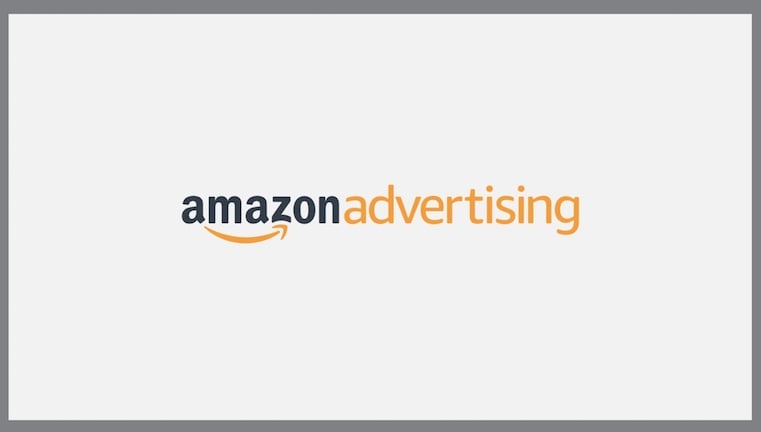 Digital ads have been discussed quite a bit over the past year, and not always in a positive light.

Ads, for example, were at the foundation of the Cambridge Analytica scandal, when a voter profiling firm was charged with improperly harvesting and using Facebook users' personal data in order to sway votes in political elections. That data was allegedly used to create ads that would influence voters.

And yet, the advertising business is booming. Case in point: Amazon.

At day two of Code Commerce -- a conference that centers around ecommerce and retail --  Andrea Leigh and Ben Winters of Ideoclick -- a company that works with manufacturers to optimize online sales -- spoke to the rapid growth of Amazon's advertising platform.

According to Winters, Amazon advertising has quickly become the third-largest digital ad platform (sponsored product ads began appearing in 2012), behind Facebook and Google. And while it hasn't yet surpassed the later, Winter says, Amazon's ad revenue is growing at 5X the rate as Google's.

So what does this mean for advertisers? We dug into what Amazon advertising looks like today, what it could look like in the future -- and what retailers advertising on Amazon or thinking about it should do to optimize their efforts.

Users may have seen evidence Amazon's growing ad platform while browsing the site. According to Recode -- as well as Leigh and Winters -- the company is "stuffing" its search results with ads.

Consider that 54% of product searches on the internet take place on Amazon, according to Winters. Now, the first three listings that appear in those search results -- "which take up the whole screen above the fold — everything visible before you scroll," as Recode's Roni Molla writes -- all consist of ads.

And it makes sense why Amazon would give advertisers this plum real estate. People are more almost certain to buy something that appears on the first page of results, Leigh says -- so much so, "you could bury a dead body on the second page, because nobody goes there.”

Let's look at what happens, for example, when we search for "dog food": 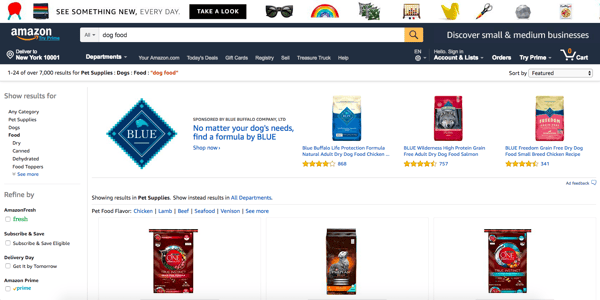 As Molla pointed out, there's nothing visible before scrolling down that isn't an ad.

And this means that there's precious little organic real estate on that first page, and a lot of competition for it -- leading to what Leigh calls a "pay to play" situation.

"This is a bad time to be a manufacturer on Amazon," Leigh adds. "The squeeze is there."

In fact, she even asserted that Amazon is sometimes "predatory" in its advertising practices. That limited real estate we mentioned earlier? Amazon uses some of it for its own private label ads, withholding the space from advertisers and sometimes going so far as displaying these ads on product detail pages for competing products.

And regardless of whether facets of Amazon’s ad strategy is “predatory,” , Winters says it makes sense for Amazon, considering the amount of data it has on user preferences and buying behavior. It knows where to display those ads to get the most return.

As for user data, Amazon is also expanding its collection methods, in part with its Go stores. The store's "walk-out technology," enables customers who have downloaded the Go app to add the items they want to a bag and leave, with the help of sensors.

But here's the thing about that sensor technology: Not only does it read what you're putting in your bag to buy, it also measures which products you pick up, observe, and then put back -- mimicking the ecommerce browsing experience, but in real life.

And this powerful hybrid of on- and offline behavioral user data could make Amazon’s ad targeting even more powerful in the future -- both for advertisers and its own purposes.

So what does this mean for marketers and SMBs -- especially those who don't necessarily have the ad spend available to "pay to play"?

If you ask Leigh -- which we did -- it turns out that advertising may not be the end all, be all for smaller manufacturers. Not at first, anyway.

To figure out how to make Amazon advertising work for them eventually, she advises manufacturers to look at where they have a larger or engaged audience.

"If you have a social following, or do a lot of events, you can send that audience to Amazon," she says. "We call that ‘juicing the flywheel.’”

There are also some lessons to be learned from search optimization here, especially when it comes to knowing what your target buyers are searching for on Amazon.

Keywordtool.io, for example, has its own resource specifically for finding Amazon search keywords, and can help retailers understand what their target buyers are searching for.

Once you do find the right keywords -- and garner an ad spend -- Leigh recommends being as specific as possible.

"The majority of searches on Amazon are very specific, like ‘probiotic for elementary-aged children’," she says. "And they have a really high conversion.”

She was firm that an ad budget isn’t a prerequisite to success on Amazon.

"You don’t have to buy advertising on Amazon to be effective," she says. "I think there are other ways to grow on Amazon, especially if you have a good following."