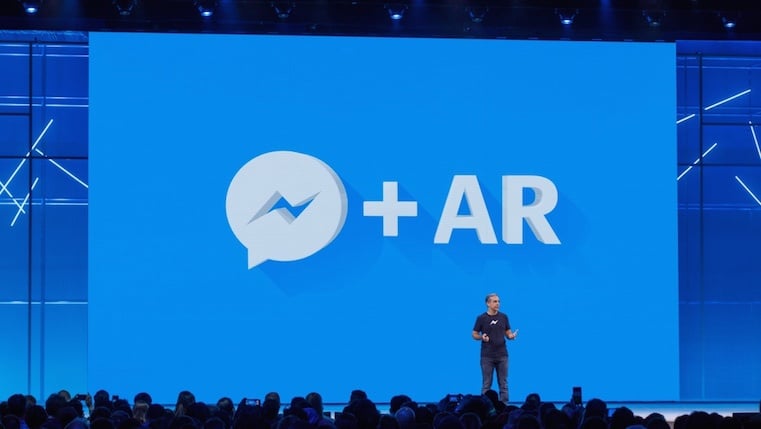 We all have a favorite time a year. For some, it's the winter holidays. For others, it's the entire duration of summer. And for tech nerds (including yours truly), it's developer conference season.

This week, the season for developer conferences forged ahead, with news and product announcements coming from Microsoft, Google, and several more. But settle in: that's far from the only tech news that emerged over the past week, as the entire sector has been quite busy lately.

As first reported by Recode yesterday, Facebook is bringing a major shuffle to its executive org chart, with changes being made among the leadership at WhatsApp, Messenger, and the core Facebook app. Here's a rundown of the overall changes.

First, Chris Daniels, VP of Product at Internet.org, will be coming in to lead WhatsApp, the end-to-end encrypted messaging app owned by Facebook. Right before F8 (Facebook's developer conference) kicked off, WhatsApp CEO Jan Koum announced his departure, and Daniels will be taking his place.

Koum also left an open vacancy on Facebook's board of directors, which will be filled by Cranemere CEO Jeff Zients.

David Marcus will transition from head of Messenger to the lead of a new, internal division dedicated to the blockchain. He will be joined by Instagram VP of product Kevin Weil. Marcus's responsibilities will be assumed by Messenger VP of Product Stan Chudnovsky.

Head of News Feed Adam Mosseri will be taking over for Weil at Instagram. Facebook of VP of Product Management John Hegeman will assume Mosseri's responsibilities.

Facebook's Chief Product Officer Chris Cox, who previously oversaw only Facebook's core app, will now be in charge of every one of the company's portfolio apps: Messenger, Instagram, WhatsApp, and Facebook. Cox's previous Product responsibilities will be assumed by VP of Product Management Will Cathcart.

Taking over product for Facebook's core app is longtime Cox lieutenant, Will Cathcart. He's been there almost 8 years, and was recently running the profiles team (the same team responsible for Facebook's new dating service...)

Among all of these changes, Facebook has also created a team dedicated solely to privacy products, such as the Clear History feature announced at F8. According to Recode, that team will be led by Director of Product Management David Baser.

Here's a look at the new org chart. As for its composition, we'll let this tweet from Bloomberg's Sarah Frier speak for itself ...

... as well as this one from Cecilia Kang of The New York Times.

For the This Can't Go Wrong File: the creators of the most popular and powerful social and tech tools online do not reflect the ethnic, gender, global diversity of its users... https://t.co/GWQM72NYQN

This week, we're seeing many of the higher-profile annual developer conferences wrap up, with the exception of Apple's WWDC scheduled to take place in June. While last week we saw F8, Monday featured the opening keynote of Microsoft Build, and Google I/O kicked off yesterday with the event's opening keynote (see our full coverage here).

But throughout these events, there seems to be an undercurrent of transparency, ethics, and the responsibility of tech companies. And although the F8 keynotes touched on these topics a bit at F8 during a discussion of AI ethics, the themes were particularly strong during the opening keynote of Microsoft Build.

"Privacy is a human right," CEO Satya Nadella proclaimed early on, setting the tone for the remarks to follow.

Nadella went on to challenge his peers to "ask ourselves not only what computers can do, but what computers should do," which was echoed throughout many of the product and feature reveals.

Many of these potential abilities fell under the umbrella of AI, and how related tools like transcription, translation, and dictation can be of significant service to people with disabilities.

"I'm deaf, and I work with a sign language interpreter," said engineer Katie Sullivan from the stage. "The transcript doesn't eliminate the need for my interpreter, but it lets me give my full attention, without having to worry about note-taking."

But there were many other announcements made throughout the keynote, such as a new integration between Microsoft's voice assistant, Cortana, and Amazon's, Alexa.

Users who have one company's hardware can now seamlessly use the voice assistant of the other -- so that if, for example, someone owns an Amazon Echo but manages her calendar with Cortana, she can use the two without switching platforms.

3. Instagram Is Likely to Add a Music Sticker to Stories

Anyone with a vivid imagination has almost certainly thought at some point, "My life should have its own theme music."

Well, now it can -- by way of what you share on Instagram stories, at least. According to a scoop from TechCrunch, developer Ishan Agarwal discovered music icons and related code within the Android version of the app. This code points to the eventual reveal of a music sticker, which would allow users to add a soundtrack to any visual content they share on stories.

Stickers currently allow users to add things like their current location, the day of the week, or the temperature where they are to their Story photos and videos.

But musical integration is something that Instagram seems to have been working on for some time.

At F8 last week, for example, company leaders allowed an integration with Spotify that lets users share a sticker of what they're listening to on the music streaming service. 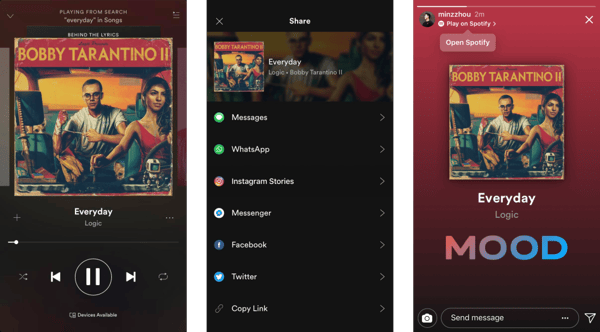 As the TechCrunch report points out, there hasn't quite been a seamless way to add a soundtrack to videos shared on Instagram, or most other social networks. It usually required third-party apps or editing programs, and even then, if the music had rights protecting it from being reproduced, the videos were often removed.

With licensed music streaming service integration, that problem is largely remedied. Not only that, according to the story, but it also introduces a new competitive edge.

Currently, the app musical.ly is particularly popular among those who enjoy using it to post lip-syncing videos, as it already has a music integration built in. It also offers some of the same features as Instagram, like stickers and filters.

But compare musical.ly's 60 million monthly active users (as of November 2017) to Instagram's 800 million -- as well as its longer existence and Facebook ownership -- and the imbalance becomes evident. The feature has yet to come to fruition, but when it does, its impact (if any) on musical.ly will be interesting to observe.

Encrypted messaging is a much-talked-about topic recently. Just this week, Facebook released a statement and explanation on why and how its end-to-end encryption on the WhatsApp messaging app works, pointing to its value the work of professionals like journalists (for protected conversations with sources), and use cases like a private dialogue between doctors and patients.

Messenger offers an encrypted messaging option as well, with its Secret Conversations feature, allowing participants to have an end-to-end encrypted conversation that can't be seen by anyone else, including Facebook, the company alleges.

And while Twitter does allow things like open direct messages (DM) -- in which users can send someone a private note even if that person doesn't follow them back -- it's never offered any level of encryption for them, leaving them vulnerable to surveillance.

But now, reports TechCrunch, that could be changing. The possibility of such a feature launch came to light when another developer, Jane Manchun Wong, discovered code inside the Twitter Android application package that revealed options to start a secret conversation, as well as encryption keys.

In the realm of journalism, at least, the potential addition of encrypted messaging within Twitter is significant, as that's often the first point of contact or discoverability for many reporters. What the exact nature of the feature remains to be seen, and it's possible that Twitter will have to come to the defense of its own encrypted messaging, much like Facebook has felt compelled to do.

For instance, WhatsApp has been questioned about the use of its encrypted messaging "by bad people to do bad things," writes Facebook Global Public Policy Lead on Security Gail Kent -- especially by law enforcement officials who feel a sense of urgency to access secret conversations when a related threat might be imminent.

Part of her job, she says, is working with such officials with "valid legal requests."

As of writing this post, there is no official release date or confirmation of an encryption feature within Twitter DMs.

If you missed our F8 coverage last week, check out our recaps of the Day 1 and Day 2 keynotes.

During the Facebook developer conference, virtual reality -- particularly Facebook's Oculus Go headset, which was gifted to every person in attendance -- was given particular attention. This indicates that the company plans to make significant investments in this technology.

Now, it's even changed the name of its Oculus Research Lab, which will now be known as "Facebook Reality Labs," according to a statement from the company's Chief Scientist, Michael Abrash.

These moves all point to a desire within Facebook to more broadly associate and integrate this virtual technology -- perhaps strongly affiliated with the Oculus name -- with its own brand. At Oculus Connect in October, Facebook CEO Mark Zuckerberg stated a goal of having one billion people eventually using VR, but by when, exactly, remains unknown.

Earlier this week, some Instagram users began seeing an option to add payment methods -- like a credit card -- and make purchases from certain vendors within the app. Other users claimed to be able to book appointments at spas and restaurants.

The app later confirmed to The Verge that users will be able to "book services from a limited number of businesses," through the app, citing the development as an extension of a feature first announced last spring.

(Have you come across or used this feature? If so, let us know on Twitter.)

Both Google and Facebook announced this week that they would be banning any ads for bail bonds from their respective sites, with the forming citing the exploitation of disadvantaged communities that often results from such content.

"We made this decision based on our commitment to protect our users from deceptive or harmful products," wrote Google's Director of Global Product Policy David Graff in a statement.

Facebook later issued its own intention to bar such ads from its own platform, with Vice President of Global Policy Management Monika Bickert telling Axios, "Advertising that is predatory doesn't have a place on Facebook."