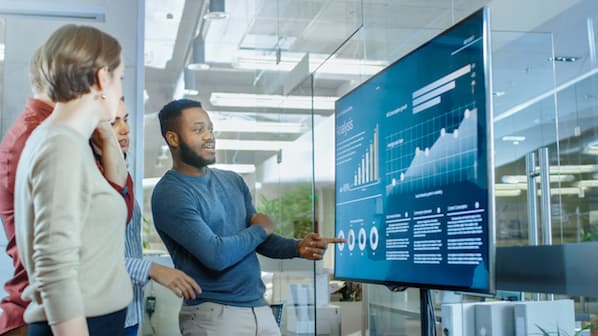 Every time I think I've gotten a grip on the weird, wonderful world of sales, I learn something new that forces me to change my perspective and question my beliefs.

Like just 17% of salespeople think they're pushy -- compared to 50% of prospects.

And along similar lines, only 3% of buyers trust reps. The only professions with less credibility include car sales, politics, and lobbying.

Ouch. Luckily, not all sales-related data will bum you out. This list of sales statistics has invaluable nuggets of wisdom on everything from which words to avoid in your email subject line to the optimal number of questions to ask during a discovery call.

1. More than 40% of salespeople say this is the most challenging part of the sales process, followed by closing (36%) and qualifying (22%). If you find prospecting to be the most difficult part of your job, you're not alone.

3. Gong's data science team analyzed 15 months of data and found average salespeople made far more calls in the last month of the quarter than the first two. And the success rate of those "eleventh hour" calls were usually lower than any other month. Devote time to prospecting each and every day. You should be prospecting just as much on the first day of the month or quarter as the last.

4. Almost six in 10 buyers want to discuss pricing on the first call.

5. More than half of prospects want to see how the product works on the first call.

6. One in four buyers want to discuss budget, authority, and timeline. This indicates that buyers are less concerned with the qualifying topics salespeople are usually most interested in:

7. 19% of buyers want to connect with a salesperson during the awareness stage of their buying process, when they're first learning about the product.

8. 60% want to connect with sales during the consideration stage, after they've researched the options and come up with a short list.

9. 20% want to talk during the decision stage, once they're decided which product to buy.

10. It takes an average of 18 calls to actually connect with a buyer.

12. Nine in 10 companies use two or more lead enrichment tools to learn more about prospects.

13. Seven in 10 B2B buyers watch a video sometime during their buying process. Use that to your advantage, and send them a customized video.

14. Videos about product features are most popular, followed by how-tos and professional reviews.

16. 77.3% of respondents said their company provides at least one quarter of their leads.

17. An analysis of more than 2,200 American companies found those who attempted to reach leads within an hour were nearly seven times likelier to have meaningful conversations with decision makers than those who waited even 60 minutes.

18. Drift tested the response time of 433 companies. Only 7% responded in the first five minutes after a form submission. More than half didn't respond within five business days.

19. The average person deletes 48% of the emails they receive every day. This task takes them just five minutes.

20. The vast majority of prospects want to read emails at 5 and 6 a.m. (Who knew there were so many early birds out there?) Use an email scheduling tool -- like the one in HubSpot Sales -- to send your message at the perfect time.

21. Here are the most effective words to put in your email subject line:

22. And the most ineffective words to use in your email subject line are:

23. According to Boomerang's analysis of 300,000 emails, an all caps subject line hurts response rates by approximately 30%.

24. Subject lines with three to four words get more responses than shorter and longer ones.

26. The more you write, the less likely you are to get a response. Only one in three messages that are longer than 2500 words receive a reply. However, you shouldn't be too brief: A 25-word email is roughly as effective as a 2000-word one. What's the sweet spot? Between 50 and 125 words -- or around the length of this paragraph.

27. Don't just provide information -- request some, too. Emails that contain one to three questions are 50% likelier to get replies than emails without any questions.

28. According to Gong's analysis of 519,000 discovery calls, there's a clear relationship between the number of questions a rep asks and their chances of success. In other words, if you want your discovery call to go well, make sure you're periodically posing questions to the buyer.

29. Asking 15-18 questions over the course of your discovery call is only marginally more effective than asking 7-10. Aim for 11-14, Gong found.

30. Wondering what to ask? Questions about your prospect's business pain points and objectives are closely tied to a won deal.

31. And when should you ask these questions? While average salespeople ask most of their questions at the beginning of a call -- usually because they're moving through a checklist -- great ones space their questions evenly throughout the meeting. This makes the conversation feel like a natural back-and-forth rather than an interview.

32. Top performing salespeople are up to 10 times likelier to use collaborative words and phrases than low-performing ones. With that in mind, default to "we," "us," "our," and "together" over "you," "I," "me," and "your."

33. The most successful reps use terms that inspire confidence, such as "certainly," "definitely," and "absolutely," five times more often than low performers.

34. 41.2% of salespeople said their phone is the most effective sales tool at their disposal.

35. Research from Gong reveals these are the worst words for your conversion rates.

37. The use of collaborative words had a positive impact on the calls and using "we" instead of "I" increased success rates by 35%.

38. Using "Did I catch you at a bad time" makes you 40% less likely to book a meeting, while asking "How are you?" increases your likelihood of booking a meeting by 3.4X.

39. 65% of salespeople who use social selling fill their pipeline, compared to 47% of reps who do not.

40. Four in 10 reps have recently closed two to five deals directly thanks to social media.

41. Half of revenue is influenced by social selling in 14 common industries, including computer software, healthcare, and marketing and advertising.

43. HubSpot Research's survey of salespeople revealed more than half rely on their peers to get tips for improving. 44% looked to their manager, 35% to team training resources, and 24% to media.

44. Nearly six in 10 salespeople say that when they figure out what works for them, they don't change it.

46. Salespeople spend just one-third of their day actually talking to prospects. They spend 21% of their day writing emails, 17% entering data, another 17% prospecting and researching leads, 12% going to internal meetings, and 12% scheduling calls.

47. Around three in four organizations use classroom training as their primary way to train salespeople.

48. High-performing sales organizations are twice as likely to provide ongoing training as low-performing ones.

49. Sales professionals with three to four years of selling experience spend 50% more time on training than those with two years or less and 110% as those with five years or more -- probably because rookies aren't sure if they're going to stay in sales and veterans don't believe they need to develop further.

52. Here are the top ways to create a positive sales experience, according to buyers:

54. The top sales priorities are:

55. Google found nearly half of all buyers are millennials.

56. And calling high might not be the best strategy anymore: While 64% of the C-suite has final sign-off, 81% of employees not in the C-suite influence purchasing decisions.

57. Almost half of deals are lost because of budget. 25% are marked closed-lost because of timing. Lack of authority, time to review, and urgency are the third, fourth, and fifth most common reasons, respectively.

59. A study of sales development organizations from 900+ companies found the average SDR performs 94.4 activities a day, including social, call, voicemail, and email touches.

60. These activities led to an average of 23.1 appointments set and 72.3% of these appointments become opportunities passed to sales.

62. A survey by sales strategist, Marc Wayshak, found that 41.2% of respondents said the phone is the most effective sales tool.

63. Only 24.3% of salespeople exceeded their quota last year.

64. 84% of buyers now kick off their buying process with a referral.

65. Nine in 10 buying decisions are made with peer recommendations.

66. 92% of buyers trust referrals from people they know.

69. Forrester predicts one million sales reps will be out of a job by 2020.

74. One in four salespeople majored in business. The second most popular major? The degree of life. 17% never attended college.

75. Only 39% of salespeople intended to go into sales.

Are you surprised at what you've learned, too? Numbers might not tell the whole story, but they certainly illuminate many aspects of it. Keep checking this page for updates. As new data comes out, I'll add it to the list.

To learn more, read about some of the top challenges inside sales is facing.