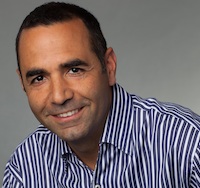 Ahmad Ouri joined IZ-ON Media in 2011 from parent company Technicolor, where he was chief marketing officer since 2009. Previously, he held several senior positions at Technicolor after joining the company in 2002, including president of Technicolor Digital Cinema, chief technology officer, and president of Technicolor's Content Services division. Prior to Technicolor, Ahmad was CEO of Philips Electronics' digital video server division. He attended the University of Utah, where he graduated with two Bachelor of Science degrees in electrical engineering and mathematics, a Master's in business (MBA) and completed studies for a Master's degree in engineering (instrumentation).

Why Cast a Net When You Can Throw Spears? Using Digital Place-Based Media to Target Specific Audiences