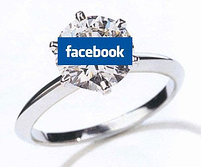 With the number of Facebook users continuing to grow, businesses are having a hard time justifying staying away from the social network. Recently, AT&T released the results of its Small Business Technology Poll . In the survey, AT&T found that 41% of small businesses surveyed have a Facebook page for their business. Last year, only 27% said they were using the social networks, which is a 52% jump in usage.

Although the amount of usage is growing quickly, it is still taking some businesses quite some time to get their "Facebook legs." A lot of businesses are using Facebook as a broadcast mechanism instead of a tool to engage with their fans. For those who are attempting to engage, standing out amongst the sea of other Fan pages out their can be difficult and frustrating, especially with a limited budget.

In Dan Zarrella's recent Science of Timing , he talks about the concept of contra-competitive timing. This is the idea that you should time your actions, whether it be sending email, tweeting, posting to Facebook or blogging, so that they take place when your competitors are not. As we can see from the eMarketer statistics below, this effect seems to be present on Facebook as well. eMarketer found a 20.0% increase in engagement for posts made outside business hours, so I would encourage businesses to attempt to post during off-hours if they are trying to stimulate engagement with their fans. Below, I've included a few more tips for how you can encourage engagement with your fans. 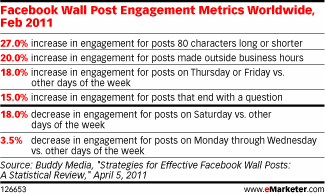 There was a 27.0% increase in engagement for posts 80 characters long or shorter. Time is a person's most precious resource. Respect that and you will be rewarded with a higher potential of having fans read and possibly even respond to your posts.

It might seem obvious, but people are more likely to engage if you ask them something. It has long been discussed that people don't want to hear about you they want to hear about what problem you solve or what solution you offer. Asking questions not only increases engagement, but it allows you to see into the mind of your fans and understand what really matters to them.

When everyone else's business is winding down for the weekend you should be ramping up your efforts. With less noise to compete with and your fans possibly winding down as well, this is the perfect time to try to break through the clutter and engage with them.

One statistic that I found interesting was that there was an 18.0% decrease in engagement for posts on Saturday. My thoughts are that a lot of people take Saturday as their day off from technology, and this results in the lack of engagement. What do you guys think?