The Pros and Profits of Podcasting 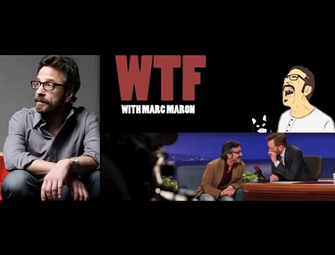 It's 2011, and chances are you find it convenient to listen to things on the go. Podcasting now has it's place as a popular medium of mobile media; recording can be as simple as plugging a mic into a laptop, and listening becomes a leisure activity while playing on an iPod.

Similar to watching TV shows on demand, podcasting is used as a platform for adversiting. It is effective in the marketing world both for the marketer and the target audience. It is a cheap (possibly free) way for marketers to create a campaign or ad to promote a product, service, or idea. Target customers can listen to the audio at their convenience: on a run, at the gym, in the car, etc.

In his Rise to the Top interview with David Garland, Marc Maron , creator and host of top online comedy podcast, " WTF ," talks about the evolution of podcasting, its differences from other media mediums like TV and radio, and what makes a successful show.

Maron has also run a variety of shows including his own and others on Comedy Central, as well as 44 appearances on Late Night with Conan O'Brien .

What is podcasting all about, and how can it be profitable?

Maron says podcasting is all about unscripted, in-depth, casual conversation. The medium itself is completely free, allowing freedoms that don't exist in the TV and public radio worlds. Maron references the fact that he can say and do whatever he wants without somebody else telling him otherwise.

Profit from podcasting can come from a mixture of things, and Maron's show went through an evolution beginning with donations. As numbers grew, advertisers came into play.

"WTF" offers pay shows, which are unique, live episodes that are available for purchase. Selling merchandise also rakes in its portion, and now the show has advanced to iPod/iPhone/iPad/Droid apps.

What makes a successful podcast show? Building an audience.

Why is building an audience important? Because putting all the work into producing something without attracting a following would just be a waste of time. While you benefit your audience, your audience can also benefit you. As consistent listeners grow to appreciate your content, they will also share your content and grow in number, expanding your reach .

Strive for an active audience. An active audience will contact you, post comments with feedback, and engage with you. Being aware of little things such as what they liked and didn't like about your show will help you to improve your podcast and in the long run. The more knowledge you have of what your audience wants, the more successfully you can craft your content to be effective.

Expose the "inside world" ("behind the scenes"). Many people value information that is not exposed to the public. Offering an exclusive opportunity to obtain information not readily available to the public will make your podcast more appealing and exciting.

Integrate and involve the audience with personal issues. Individuals know the most about things they have personally experienced. Invite your audience to talk about issues they've experienced in their industry to keep your podcast engaging.

Encourage conversations with an organic nature. People are more likely to respond to questions and open conversations rather than statements. Open up questions to be answered by anyone, whether they leave comments virtually, you give a shout-out on the show, or even invite audience members to appear as guests.

Allow authentic emotions . When people participate on an emotional level, others are more likely to relate and become more one engaged with your show.

To view the full Rise to the Top interview with Marc Maron, watch the video below.

Have you experimented with podcasting? If so, what have you learned?

Topics: How to Podcast