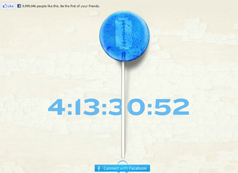 If you haven’t had a lollipop lately, you should try this one. I promise you’ll enjoy it.

No, I’m not offering real candy, but I am offering an experience you’ll still find sweet (your teeth can thank me later). Take This Lollipop, a new Facebook application, is a creepy but fascinating interactive video that brings out the spookiness in social media. Launched just two weeks before Halloween, it’s already gained almost 10 million Likes, making it one of the fastest-growing Facebook apps ever.

The application, created by Jason Zada (also the creator of the very popular Elf Yourself), took only 30 minutes to script and just four weeks to produce the video. Another amazing fact: no promotion was put behind the app. It just went viral.

“It really started as a social experiment — the old adage ‘don’t take candy from strangers’,” said Zada. People did the hard part for me — they convinced each other to try it. You have this lollipop that you know you shouldn’t take, but if your friends tell you to try something that’s potentially really scary, would you do it?”

So what are the reasons behind this app’s rapid, viral growth? Here are 6 takeaways from Take This Lollipop and how you can incorporate these characteristics into your campaigns to help them get shared virally:

1. Make it an Experience

Things that go viral are not stale or boring. Oftentimes, they are exciting, educational, entertaining, fun, distinctive, foster strong emotions, or many of these in one. When creating a campaign you hope to go viral, give it a “wow” factor. Most of the time, it’s also best to avoid being too commercialized, meaning the use of over-saturated company branding that takes the life right out of it. Take This Lollipop focuses on the experience. The emotional factor in this case is fear, but it’s also fun and entertaining.

When something is complicated, people will resist using it or sharing it. Your campaigns need to be simple to understand within seconds, easily digestible and easy to use, touch, or hear. Take This Lollipop is no more complicated than accepting Facebook permissions to watch the video. And the video is short. That’s it. Always think ‘keep it simple stupid.’

Don’t create friction with your campaign, which can make it difficult to access or share. Don’t put it behind a pay wall or account registration (in most cases). Even though Take This Lollipop requires granting Facebook access (a requirement for all Facebook applications), it’s still really easy to connect the app with your profile. Also, add social media sharing buttons in visible places so people can share your amazing content!

We like new things, especially if they are unique. If you create a campaign that’s cliché and has been done before, it’s going to make it a lot less exciting. Campaigns that go viral have never been seen before. When creating your campaign, focus on creating something truly original.

There’s a lot of debate right now regarding Facebook privacy and the lack of confidentiality in social media. You never know who might be watching and who can see what information about you. Take This Lollipop capitalizes on this controversy by highlighting that exact fear (and plays off of ‘don’t take candy from strangers’) in an interesting way, which is why it has people talking. Zada further explains; “It’s kind of a horror movie that has no blood, no guts, but there’s this person that you don’t want looking at your information. And that to me was the scariest of all.”

One reason that Take This Lollipop and Elf Yourself are so popular is due to their personalized experiences. People can upload their own photos or Facebook profile, and as a result, they become part of the experience. This can make a campaign even more engaging. Look for ways to make your campaigns customized or personalized, if possible.

9 VR Marketing Examples to Inspire You in 2022