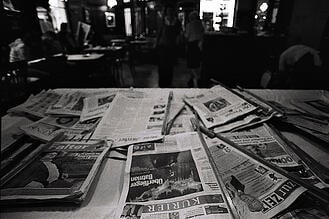 So your company is doing more with Twitter. Awesome! Here's something I want you to try.

Twitter is a great way to gradually get to know someone, build up trust, and possibly create a relationship where there wasn't one before. Most of what I'm about to tell you works in creating and improving many different kinds of business relationships, but I'm going to tailor this around public relations and getting to know journalists.

Here are 6 simple steps -- that anyone can follow -- to build credibility and relationships with journalists using Twitter. Done right, your publicity efforts can literally become inbound: journalists coming to you for quotes, interviews, and information. Here's how to tackle the first steps...

Step 1: Find and follow. Find and follow journalists who cover beats or work for publications that are relevant to your company. Even if you can't find the exact journalist you'd like to eventually know, start with someone close to them. Lucky for you, my favorite tool for this, Muck Rack, just re-launched with a better design and a range of professional tools that enable you to build your media list, listen for journalists tweeting about your company, or identify links to stories that mention you. (Can you tell I'm excited about Muck Rack Pro???)

Step 2: Listen. This is the MOST important step, and it might require a LOT of patience on your part. But really, how are you going to get to know journalists' interests, questions, needs, and ideas if you don't listen first? Check out which blogs they read, what kinds of articles they tweet, etc. Pro Tip: you can add them to a focused Twitter list that you watch more closely.

Step 3: Get on their radar. The best way to get started with this is to simply say nice things (sincerely nice things...nobody likes an apple shiner) about their work. Maybe this means tweeting an article they wrote and including their Twitter handle in the tweet. Maybe it means thanking them for an article they wrote that was particularly helpful. If you find something tweet-worthy in their stream, include their Twitter handle (again with a thank you or a "HT" or "TOTH" for Hat Tip/Tip of the Hat) at the end of your tweet when you tweet it.

Step 4: Make yourself useful. Has a journalist asked a question that you can answer? Do you know a good source for a story they're working on? As long as you're not being spammy or stalkerish, feel free to offer it. I once hit the mother lode on this one, when a journalist I really wanted to get to know tweeted that she had installed a Twitter app with really invasive location settings. The default was to broadcast your exact latitude and longitude to the entire world. I was immediately able to tweet her and warn her to fix that default setting and protect her privacy. This was the first she'd ever heard from me, and it immediately established my credibility as an expert on Twitter apps.

Step 5: Fish where the fish are. There are some terrific standing "chats" on the topic of journalism. Did you know that the very first official "Twitter Chat" was #journchat? @prsarahevans wanted to bring together journalists and PR professionals for an open dialog about their industry.

Step 6: Ask. Note the order of these steps. Most people get it wrong and jump straight to this one without building any kind of credibility, familiarity, or social capital beforehand. BIG mistake. Also, the first time you ask a question, make it about them instead about you. Make it a genuine question, not a request, favor, or (shiver) demand. They may or may not answer you, especially at first, but if you ask intelligent and relevant questions, you're taking a big step toward establishing an actual relationship.

Once you've worked through all of these steps, you are bound to have some attention and credibility with the journalist in question. If not, move on. The object is not to hunt them down and bother them -- the object is to build a relationship. Remember above all that relationships don't have a guaranteed yield. They may cover your story one day, or they might never. But if you've selected wisely, building a relationship with a smart journalist is never a bad investment.