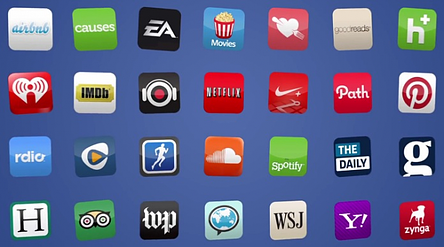 Sick of reading about all this SOPA brouhaha? How about a news story marketers can actually get behind? We had an idea Facebook would start rolling out the new Open Graph apps in January when Facebook announced it was starting to accept submissions for Open Graph actions from developers. Well, it looks like they're here!

At a press event in San Francisco this evening, Facebook unveiled the first batch of its much-anticipated Open Graph applications, which you might remember were first debuted along with news of Facebook Timeline back in September during Facebook's f8 conference.

The first batch includes 60 applications by such vendors as Pinterest, LivingSocial, UrbanSpoon, TripAdvisor, Runkeeper, etc. And starting today, developers can create apps for the Open Graph platform that "let people add anything they love to their Timelines," which Facebook will start approving, wholesale. Application stories will show up in users' Timeline in three places, and at the end of each section of Timeline, Facebook will summarize all of a users' app activity in a given month. The big announcement was over within 20 minutes, with Facebook saying they wanted to "keep it casual for now."

What Are Open Graph Applications?

Similar to the "read," "watch," and "listen" apps such as Spotify, Hulu, and the Washington Post that you may have already noticed floating around on Facebook over the past few months, these new and improved Open Graph apps allow third-party developers to create 'frictionless' apps that, after a user provides permission once, automatically share users' engagement with the app on Facebook. Furthermore, users' friends are easily able to join in on this shared activity. So if one Facebook user was listening to a song on Spotify and a friend saw that story in their News Feed or Ticker, they could start listening to that song, too, with just a click.

This capability opens up a ton of awesome opportunities for marketers and developers and the applications they can create for Facebook. Think about the extended reach your apps will have if stories are automatically shared with users' friends! And rather than only the option to 'Like' or comment on a story, users could potentially "do" all sorts of verbs and engage in all sort of activities 'with' friends, whether they're watching, reading, listening, cooking, running, eating, playing...well, you get the picture.

To take advantage of Open Graph capabilities to create customized, smarter Facebook applications, marketers will need some development resources. But if you did the homework we assigned to you in our first post about the new and improved Open Graph, you've already brainstormed a list of awesome new ways you can leverage Open Graph applications and CTAs, right? If you're going to have to take a zero on this assignment, here are a few general ideas to get those brainstorming gears turning.

4 Creative Ways to Use Facebook Open Graph Apps for Business

1. A Content Library App: Is your business a mean, lean content-creating machine? If you've spent a lot of time building up your arsenal of content offers such as educational ebooks, archived webinars, and the like, consider creating a Facebook app that serves as a content library. Then, when a Facebook user downloads a piece of content from your library, their Facebook friends will automatically see the story in their News Feeds and be enticed to 'download' your awesome new ebook, too! Helloooo leads!

2. A Free Product Trial App: Do you offer a free trial of your product? Create a Facebook app for that to leverage the social power of users who 'try' your product for free. Rebecca just signed up to try Company X's purple widget for 30 days? Don't mind if I do, too!

3. A Customer Testimonials App: Create an app that easily enables customers and fans to share testimonials about your business' various products and services. You'll reap the benefits of social proof as those testimonials automatically get shared with users' friends. Yay, reach!

4. A Customer Results/Achievements App: Create an app that automatically monitors and shares customers' results/achievements. For example, at HubSpot, we could create an app for our free Marketing Grader tool that automatically publishes a story when users' Marketing Grades increase. Or maybe it's an app that facilitates a connection between Facebook and the HubSpot software and automatically publishes stories when the user hits a certain leads or traffic milestone.

Whatever app you decide to create, there's no doubt that Facebook's new and improved Open Graph should be embraced by marketers everywhere. Doing so could mean increased Facebook engagement, better reach for your content and brand, and even more Facebook-generated leads!

Do you plan to take advantage of the new Facebook Open Graph applications?