Facebook's new "Timeline" design has been mandatory for all Facebook businesses pages for almost a week now, and you may have noticed your cover photo is now taking up some serious real estate. So even if you don't take the time to use new features like pinning, starring, and milestones, it's certainly worth taking some time to make your cover photo stunning, creative, functional, or all of the above. 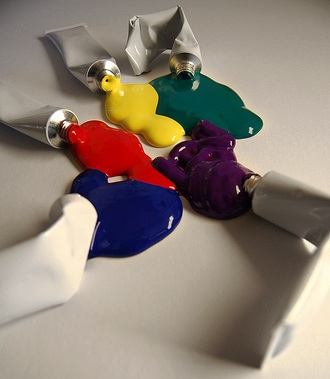 But innovation doesn't just come out of nowhere ... you need a creative spark before you can fan the flames!

So we scoured Facebook looking for some of the coolest cover photos out there we thought would inspire you. Take a look at how these brands are making the most of their new Facebook cover photo real estate. Then get out there and design a cover image that makes your Facebook page fans and visitors "ooh" and "ahh!"

We love when our customers get really into their marketing, and Sunrise Signs is certainly showing an interest in the new Facebook cover photo capabilities with this fantastic one that showcases exactly what its product does -- without words. They also highlight their clients, a great way to show customer love!

Old Spice has opted for an Eye of the Tiger meets Diehard theme in its cover photo, also known as the punch you in the face approach. Actually, it seems like their spokesman really might jump out of the computer and punch you in the face, considering Old Spice's clever cover photo/profile image alignment. But if you've seen any Old Spice campaigns in the last couple years, it's completely on point with their brand. And while it might not be your cup of tea, there's no denying it captures your attention.

Sharpie's cover photo is simple and clean, but also really, really captivating. Look at that detail and artistry! It shows fans how to use this everyday product -- a Sharpie permanent marker, and a paper cup -- in a creative way. Plus, that pop of red draws your eye in, matches the pop of red in Sharpie's logo, and reminds us Sharpie actually has colored markers!

OverGo Studio is another star HubSpot customer/partner, and their Facebook cover photo is effective because it explains what they do to an audience who may need more information about their services. Yes, they're using words, but it's not overpowering! The font is bright and crisp, and the lighter blue words in the background let someone who is really studying the photo learn about their service offerings in more detail without overwhelming visitors with copy-overload. They're another example of an intriguing, yet subtle use of cover photo-profile image alignment.

Uber's Facebook cover photo is effective because it's both functional and brand-enhancing. The cars on the map show the cities in which they operate, and the old school map reflects the understated, classic, exclusive feeling of its customers' experience.

Dropbox's Facebook cover photo made this list because it is simply adorable. And you know what? Sometimes the best thing you can do in marketing is just make people smile. Just look at that little guy in the plane! This cover photo also aligns with Dropbox's Twitter background, and helps make a relatively unsexy service (file hosting) more fun and accessible.

We featured Livestrong's Facebook cover photo in a previous post about brands that are making great use of the new features on Facebook's brand pages. Livestrong's cover photo is simple, but still artistic and strong. It just goes to show that you don't always need to get fancy -- just be visually captivating. And while we've seen a lot of brands play around with the alignment of their cover photo and profile image like we just saw with OverGo Studio and Old Spice, Livestrong cleverly carries its cover photo design into the 'Views and Apps' section of its page, where it features the Livestrong blog.

Then again, there's certainly nothing wrong with a little flash in your marketing! HubSpot customer Murder Mystery Company takes you into their dramatic world with their Facebook cover photo, letting you in on the experience of attending one of their murder mystery performances. Plus, it has a little sex appeal -- never a bad thing in marketing!

McDonald's uses its Facebook cover photo to give you sense of the company's history. Nostalgia is a great approach for McDonald's -- it showcases what I think many would agree is a more enchanting time for the fast food industry.

Jive Software's success with its Facebook cover photo is in the details. When you click on the photo, you see that the caption is "The People are the Network." What a great sentiment for a social business software company's social media page! It creates a sense of community, and the image tells us that Jive's customers are the foundation of the company.

Unlike Jive Software, HubSpot customer PhotoShelter lets you actually see the faces of people in its cover photo for a more engaging effect. Including pictures of people in your social media is always a great idea, as long as they look natural and not like stock imagery. These photos both reflect the company's purpose, and put sympathetic faces behind the brand.

Another photo site, it's no surprise iStockphoto has a spectacular Facebook cover photo -- they've got a whole website full of them! So it'd be foolish for them not to show off the best of their product. If you look closely, the bottom right corner of the photo gives credit to the photographer, and when you click into the photo, it provides a link to the website where you can purchase the photo. Talk about a subtle call-to-action!

Verizon gets their customers involved with their Facebook cover photo. Verizon changes the photo every day, replacing it with an image taken by a real customer. Then they add a picture of the customer in a small call-out, include the name of the customer who took the picture, and the name of the device they used. It not only pays tribute to Verizon's customers, but it also shows off the capabilities of their products.

Zipcar got some clever copywriters involved with their Facebook cover photo! They combined a funny, quippy saying with an image that shows where you can go with a Zipcar. And notice that directive in the bottom right corner? It tells fans what to do -- get out, and zip!

Lawyers.com has gotten around the call-to-action restrictions of the new Facebook design by including an image of their latest piece of content. When you click into the photo, they include a link to the post which then takes you to the full piece of content.

UrbanDaddy's Facebook cover photo is exceptional at reinforcing their brand, but with subtlety. The photo doesn't tout their product -- which is their content -- or their offers. It's all about the person who reads UrbanDaddy, and the lifestyle they embody.

And of course, we wanted to give our own Facebook cover photo a little love! We combined the orange our brand is known for with the Boston skyline -- it is our Hub, after all!

What creative Facebook cover photos have you seen? Share them in the comments so we can all be inspired!

Make a great first impression with a quality cover image for your Facebook Page.