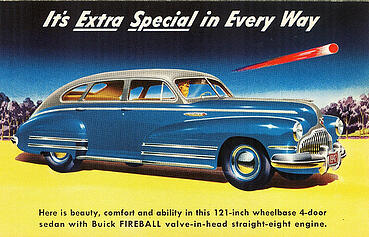 That kind of marketing lingo seems kind of tired, doesn't it?

Well, regardless of how it may seem, there appears to be some evidence that the "exclusivity" approach is still alive and well. Let's start by diving into learning about a new company that has just sprung up, taking an interesting spin on the exclusivity concept.

Join the 11K Club and you'll get ... something. I can't tell you what, but it's DEFINITELY something.

The 11K Club is the most recent use case for leveraging exclusivity in marketing -- it follows more well-known sites like Google+, Gilt Groupe, and RueLaLa, which operate as invite-only sites now, or have in the past. The company's premise is a bit different though: there are 11,000 spots available in their exclusive club, but you can't know what the club is even for when you're signing up. You have to want to be a part of it just ... because. You can send in your application for inclusion in the club, and you might get to be a part of it when it opens.

Here, take a look at its homepage (we've called out some of the particularly interesting highlights in orange): 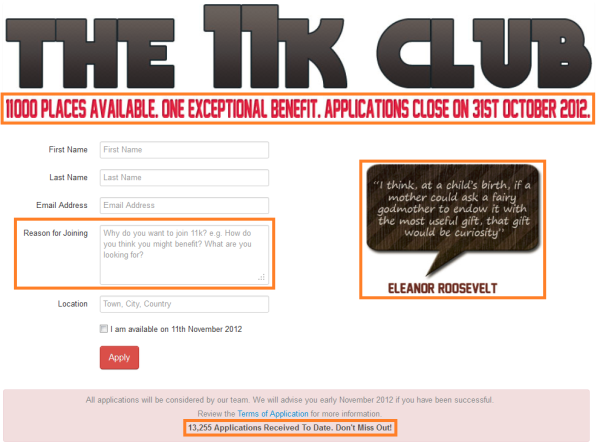 That last callout shows that they've already received more applications to be a part of the club -- 13,255 -- than there are seats available. According to an article on Mashable, the site's co-founder Steve Whyley says he's "trying to see if people will sign up to a club that they know nothing about purely because it's exclusive and because they fear they'll miss out. What 11K Club is proving, at least in our minds, is that it almost doesn't matter what your site does, how it looks, what the homepage says."

Well, I think in this case the element of curiosity can't be outweighed (as the Eleanor Roosevelt quote on their homepage supports). I mean, I signed up for that reason, and said as much in the 'Reason for Joining' field. But Whyley's still on to something here. In fact, Whyley apparently came up with the idea for the site after running a bookmarking site on which he restricted sign-ups -- not because he thought it would tap into that feeling of exclusivity, but purely to manage some spam issues he was battling. The result? A dramatic spike in sign-ups, which Whyley attributed to the fact that "people wanted to sign up because they couldn't sign up -- they thought it was exclusive (which it wasn't) and therefore wanted to join."

So it seems that leveraging exclusivity in marketing is alive and well, even if those tired sayings in the beginning of this post make it seem a little passé. So the question is ... how can you jump on the bandwagon? Well, you don't have to change your business model to mirror the 11K Club; you can simply incorporate exclusivity into your content across different marketing channels. And to get you started, this post will outline some opportunities to leverage that exclusive feelin. Take a look!

How to Leverage the Feeling of Exclusivity in Your Marketing

One of the most common ways brands leverage exclusivity in their marketing is by giving their social media fans and followers exclusive access to deals ... just for being part of their networks. Data shows it's a good use of your social presence, too -- according to an Econsultancy study, the most common reason consumers cite for following brands on Facebook is to receive special offers (70%). Now, you have to be careful the way you structure this. It's against Facebook's rules to make receiving an offer a condition of 'Liking' a page, for example. But there's nothing wrong with, say, giving your fans and followers a network-specific coupon code so they can save a few bucks!

Watch any local news commercial and you'll see them leveraging this technique -- you have to watch their network if you want to be part of the group that will "hear it first!"

This is to say that there's more to marketing than just tweeting out coupon codes. In an age where content is king, giving your social media followers exclusive access to information holds a lot of power. I mean, if you're the one in your industry who's known for launching news first, alerting people to deals on other sites -- any information that your network would want to know -- you won't have a hard time gaining a large and loyal following. Here, take a look at how The Boss does it on his Facebook page, ensuring his followers hear about things they'd want to know immediately.

You could turn this whole idea of information-as-an-asset into a lead generation opportunity, too, by promoting your marketing offers as "form free" for just your social media followers. How would that generate leads, you ask? Because you have another offer (this time with a form) on your thank-you page, of course!

Did you know that emails with deals are the most frequently shared type of email?

It's true. Emails with discounts and promotions are the most shared (at 34.7%), coming in ahead of emails designed explicitly for sharing, which came in at 19.4%, according to eMarketer.

Why do you think that is? It might have something to do with people wanting to feel like they're "in the know." Particularly with their friends, family, and colleagues. In this instance, the email forwarder feels exclusive because they're letting their networks in on a deal that they wouldn't have gotten otherwise if they weren't so well connected. How very VIP of them. And you know what? Whoever receives the email feels part of the exclusive club, too. That brand new lead or customer is going to come to you not only as a referral -- so they have a happy customer singing your praises already -- but also as one who feels really special for getting to work with your company!

If you're selling a product, you have an opportunity to make your audience feel like part of an exclusive bunch every time you start developing new features or product lines -- and the side effects show in customer retention, upselling, and cross-selling. Not a bad trade-off, right?

For example, you might do something as simple as give current customers sneak peeks into product development -- you could do this via email, or take a cue from tip #2 and use your social networks. But you might want to take it a step further and invite certain segments of your customer base to actually beta those new products or features while they're in development. That way you not only get great feedback during development, but you also start the word-of-mouth marketing process before the launch even begins! And I'm pretty sure the people who helped you develop the product are going to advocate pretty strongly for it once it's released, since they now feel some ownership over its final outcome.

What does partnering with other businesses have to do with exclusivity? It gives your current customers a reason not to leave you. Here, let me demonstrate with an example. Take a look at a Facebook update GymIt recently posted:

So it turns out GymIt partnered with pizza chain Naked Pizza to give pizza discounts exclusively to GymIt members. That's a pretty cool little perk for being a GymIt member. When your business takes the initiative to partner with other businesses relevant to your audience's interests, it makes you more valuable to your customers. I mean, if I leave GymIt, will the Boston Sports Club give me pizza deals?!

That's the kind of train of thought partnerships of this nature help to get in people's heads. If your brand consistently delivers value through exclusive partnerships like this, you'll earn life-long customers that recognize you actually care about making them happy by delivering valuable "bonuses" that they couldn't get from a competitor.

This is something your sales team can definitely leverage. If you're going to launch a pricing change, the first thing to do is grandfather current customers into it at their old rate. I mean, they joined the club in the beginning, so they should be rewarded for it.

But there's more "club joining" to be had with a pricing change. You could turn this into a creative exclusive marketing campaign by inviting your customers to invite their friends, family, or colleagues to become a customer at your old rate. You know, get it while the gettin's good. This calls on the feeling of exclusivity that comes from referrals that we talked about in tip #3. You could also give your sales team the green light to invite leads that are on the fence about purchasing to come on at the old rate, helping close some deals that might otherwise be lost (or at the very least be pushed off for weeks or months into the future).

7) Build a Brand Around Exclusivity

You could execute marketing campaigns that focus on the feeling of exclusivity ... or you just build a brand around the concept. There are some brands that do an excellent job of making their leads and customers feel like they're part of an exclusive club in every piece of content they release. UrbanDaddy is a prime example of a company that's built its brand around exclusivity -- just take a look at this email, for example:

Did you read that copy? Saying things like "Everyone else: Impossible" and "Also per usual: you've got a Perk that gets you all of 'em for less than everyone else" helps to constantly reinforce the message with subscribers that their membership with UrbanDaddy secures them insider status. And why would you ever leave a community that gives you unfettered access to the VIP treatment?

What other ways do you leverage the feeling of exclusivity to make your marketing more effective?