The Power of Marketing Personalization in President Obama's Re-Election 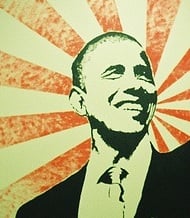 Content is king, right? Everybody says that, so it must be true ... right? Well, to a certain degree, it is. But content on its own is worthless unless it's high quality, relevant, personalized, and delivered in context. 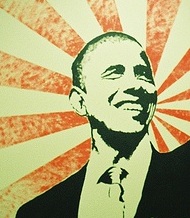 During the 2008 presidential election, content played an important role in electing Barack Obama. Four years later, content played an even more important role: With inbound marketing strategies applied, that content was given context. It was personalized. It answered the unique interests of voters and campaign supporters by addressing specific, individual needs.

Because leveraging personalization and context has become so important -- and more accessible -- for inbound marketers lately, I was interested in learning more about just how the Obama campaign approach evolved over the years. So I reached out to President Obama's Digital Director Teddy Goff and asked him to share with us the importance of content and how that changed from 2008 to 2012.

While Goff wasn't about to give all his secrets away to me, he was happy to share his inbound marketing-focused approach to content strategy and how that approach changed from 2008 to 2012.

"Almost all web content today is personalized to at least some degree, and that which isn't is likely to have a harder time breaking through. We consistently found that people wanted to get a sense from the campaign that we knew who they were and what they'd done for us in the past. Something as simple as dropping in a line like, 'You've volunteered before; thank you. Now take the next step and become a donor,' into a fundraising email to non-donor volunteers, had a huge impact on results."

In essence, Goff practiced what we preach here at HubSpot: Create marketing people love. In the case of the 2012 Obama campaign, people wanted to be involved. They loved their candidate and they wanted to be an integral part of making the campaign a success. And by continuously personalizing his outreach, Goff was able to build a legion of Obama supporters.

Chief among Goff's 2012 efforts was Dashboard, a social tool that allowed Obama campaign workers to centralize data gathered from phone bank workers and voters who had subscribed to email via myBarackOmaba.com -- or who they had been contacted through canvasing efforts. 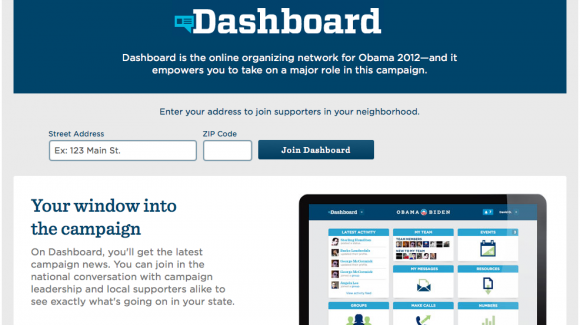 Campaign workers in key states were then able to reach out to voters who had expressed support with customized emails urging supporters to do volunteer work for the campaign. Dashboard gave local campaign workers and supporters a centralized resource from which to deliver specific campaign information through email, as well as to solicit support from those who had, in a sense, raised their digital hand. Previously, local area staffers had to rely on their own personal contacts within the community.

Dashboard also served as, well, a dashboard, providing campaign staffers with up-to-the-second information on the number of campaign calls made and email messages sent, the number of doors knocked upon, and the number of new voter registrations obtained. 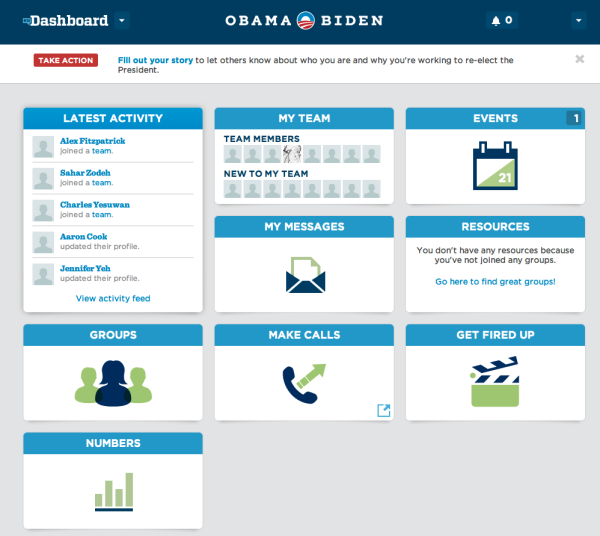 About Dashboard's role in the 2012 campaign and how campaign efforts changed since 2012, Goff told me ...

"The internet was of course very important to 2008, but certainly social media as we now know it was in a very different place. The most important social site for us in '08 was my.barackobama.com -- our own organizing platform. You could create accounts, form friendships, start a blog, and do all these other things that feel slightly outmoded now that Facebook and Twitter are so ubiquitous. myBarackObama's successor, Dashboard, was very important this time around, but in a totally different way -- as an organizing platform for making phone calls, downloading packets for door-to-door canvasing, communicating among on-the-ground volunteer teams, etc. The social ephemera that were the heart and soul of myBarackObama weren't as integral to Dashboard, because those things were available elsewhere."

Goff's Focus on Personalization in the Middle of the Funnel

The key difference between Goff's 2008 and 2012 efforts was how he layered on a more personalized, middle-of-the-funnel inbound marketing strategy, which gathered together persona-based information he could use to reach out to supporters with customized offers, or -- in political parlance -- campaign support material that would convert supporters into campaign activists.

When asked how he reached younger voters under the age of 29 -- half of whom have no listed phone number -- Goff spoke to the importance of content creation and social media outreach, saying ...

"Young people are very smart, savvy recipients and interpreters of information. 'Marketing' per se just doesn't work on them very well. That forced not only our campaign but every other campaign and business to think about them in a different way -- you need to start with a good product, good service, and good content, and then figure out how to get people to pay attention, rather than the other way around."

Chatting with Goff, it became evident that he is a big supporter of content strategies that offer customers -- in his case, potential voters and campaign supporters -- the personalized information and answers they need to make an informed decision. He's also big on the power of customized content to engage people outside the core support group; regular voters who have a passion but just need a way to become involved. Goff elaborated by saying ...

"The more important the ordinary supporter becomes -- and of course the ordinary supporter is becoming more and more important as social tools become more powerful and people spend more of their lives talking to more people online -- the more critical it is for campaigns to take seriously the task of keeping people interested, engaged, and inspired through good content."

Goff knew he could, moreso in 2012 than in 2008, offer up the right personalized content to Obama's supporters. He also knew he could further engage those supporters and voters with his Dashboard-based efforts that provided a mechanism to manage communication and outreach between the campaign organizers and the supporters. In effect, Dashboard collected the necessary information Goff could use to implement more personalized middle-of-the-funnel marketing that brought voters and supporters closer to the fold. And as savvy inbound marketers know, the development of buyer personas -- in addition to middle of the funnel processes like lead management -- are all integral parts of an effective inbound marketing strategy.

So, yes, content is still king. But personalized content delivered in context is far more effective. Goff knew this. Many smart marketers know this. Do you?