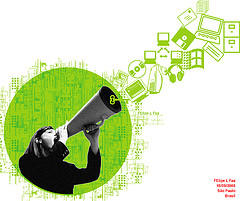 This is a guest post from Rebecca Corliss, an active Twitterer and organizer of Social Media for Social Change (SM4SC). You can find her on Twitter as @repcor and at www.rebeccacorliss.com.

It's ironic. The most common criticism from the Twitter-adverse is their dislike for one of its best features: "Why should I tell people what I'm doing? Why should I care what other people are doing? That's creepy."

And at first glance, they're right. Being able to track what a large group of people are doing, reading, thinking, wishing or complaining at any given time is creepy ... in real life.

But Twitter isn't real life. The Twitterverse isn't the universe. And before you can truly reap the benefits of Twitter, you must understand that it has its own unique culture and social customs. Meeting on Twitter is a totally different ballgame.

Question: Would you tell your friend what you're doing? Would you let your roommate know that you had the BEST soy latte today or you read an amazing blog post about global warming? Sure you would. That's not unusual information to share. You just wouldn't offer that information to a random person you just met.

On Twitter, it's normal for users to share simple, random information with strangers. People are welcoming; you're friends before you're friends. With this open and friendly culture, people comment and react to each other's random statements. Eventually, you get to know the people in your Twitter community pretty well.

By meeting people in such a casual, open atmosphere where people speak freely about everyday things, complain unanimously and argue openly, Twitter becomes a platform that promotes hyper-speed relationship development simply because people are sharing information that they normally wouldn't disclose right away.

On Twitter, that powerful executive who generally would be impossible to contact is letting you know that her baby is celebrating its 4th birthday. That future business lead is telling you that his favorite color is blue.

At this personal, get-to-know-you level, the best professional relationships develop those that lead to your next career move, business deal or whatever else you might be looking for.

So what do you think? Did you dislike Twitter at first? Have you made connections on Twitter with people who you thought were completely unavailable to you professionally?