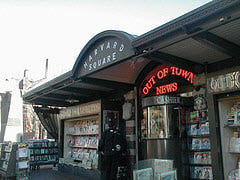 This fall here in Cambridge, MA, we learned that  Out of Town News , the news stand in the center of Harvard Square that's sold magazines to students, professors and Cantabrigians for years,  may be   closing soon .

Although its future is highly uncertain, Out of Town News is a great model for marketers. At its peak, the news stand was what every marketer should strive for with their company web site: It was a hub for its community.

This was true both literally and figuratively. The stand was at the center of Cambridge's busiest square, and everybody in the city passed through it. They stocked their shelves with carefully picked newspapers and magazines from all over the world. It was a destination and a meeting point -- a place where people stopped to read  The Economist  (or  Vedomosti ) while waiting for friends or before getting on the subway.

Newsstands of the Web

As the web evolves, many of its hubs of activity are beginning to resemble Out of Town News. On the web, as in real life, people gather in places where they get quality, well-curated information.

There's no better example of this phenomenon than the site that calls itself a magazine rack:  AllTop .

AllTop is actually a series of mini-sites devoted to specific topics, e.g.  marketing ,  social media ,  egos . Each topical mini-site lists the latest headlines from blogs and other news sources handpicked by Alltop's three staff members. The result is a series of pages that aggregate news and that are becoming a hub for their community.

Techmeme  is another example of the growing importance of filtering. Techmeme and its sister site about politics,  Memeorandum , weave together internet memes -- groups of stories that are written about a similar topic and that, together, form a conversation. When it started, Techmeme's filtering was done by software, but the site recently announced that it is starting to  edit its pages by hand .

Aggregate on Your Site

As a marketer or a small business owner, you should be aware of the rise of sites like AllTop and Techmeme. These sites show that just like blogging, social media and search engine optimization, aggregation is a powerful way to build your company's web site into a hub for your community.

It's easy to get started with aggregation and filtering. You can publish links to outside articles on your blog, on Twitter, on Facebook, via Delicious or via voting tools like  HubSpot's Web Voter .

Don't just turn your website in to a magazine, build a magazine rack.