This article is a guest post by  Paul Gillin , an author, speaker and writer who advises businesses on online marketing. He is the author of  The New Influencers: A Marketer’s Guide to Social Media  and the newly-published  Secrets of Social Media Marketing 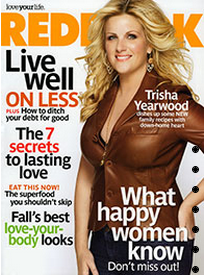 Publishers of women's magazines have wrestled for years with the same problems that Web publishers confront today: how to grab the attention of a distracted audience in just a few seconds and convince them to become regular readers.

While the media may be different, a lot of the tactics that the women's magazines use to entice people in checkout lines also work online. So I stole a recent copy of Redbook from my gym (you don't think I pay for this material, do you?) and scanned it for ideas. Here are five lessons we can learn from the September, 2008 issue.

Cover stories are everything to women's publishers. The choice of what to feature on the cover of each month's issue is the product of years of reader research, and it's intended to stop passersby in their tracks. Here are Redbook's September choices:

These selections span the issues that matter to Redbook's audience: diet, money, relationships, personal happiness and fashion. Three of the cover blurbs are meant to tantalize (Seven Secrets, Superfood and What Happy Women Know) and three others to appeal to the get-my-life-in-order instinct (Live Well, Love Your Body and Ditch Your Debt). The cover practically shouts at you that the September Redbook will make you happier, thinner, richer and better in bed. Is it any surprise that variations of these same topics adorn the covers of nearly every women's magazine?
This cover has another subtle incentive to draw in readers: fear. Fear is one of the most potent tools publishers use to sell content: fear of failing, fear of rejection and fear of not knowing.

"Don't Miss Out!" Redbook says bluntly below the happiness blurb, while the 7 Secrets and Superfood teasers intone a more subtle message: if you don't pick up this magazine you're going to miss something important. Gotcha!

Now let's have a look inside.

Flipping through the pages (people read from front to back, but they usually flip from back to front), you'll notice that everything is compartmentalized into bite-sized nuggets. Women's magazine editors worked in units of single pages and 100-words sound bites. Wherever possible, articles are deconstructed into chunks, which are given their own headlines or dressed up with images. Editors call these "points of entry," and they're a valuable tool to snag readers and keep them on the page. The longer a reader stays, the more likely it is she'll buy the magazine.

These same tactics can work online. Callouts, sidebars, pull-quotes, Q&As and other visual tools break up rivers of text and give readers more starting points to engage with the content. Note: this isn't about sprinkling random icons into your copy. It's about segmenting content and signposting it with relevant words and images that attract attention.

3. Speak directly to the reader.

Pick up any women's magazine and you'll find the words "I," "me," "you," "our" and "us" spread all over it, particularly in headlines. Should I Ditch This Friend? asks one Redbook Q&A. Find your Power at Work advises another. Even Redbook's sections -- Your Pretty Life, Your Healthy Life, Your Love Life, Your Home Life, Just for You, etc. -- reinforce the fact that these articles deliver the content to the reader's front door. People don't just want information; they want to know how information affects them. Headlines like these are the publishing equivalent of looking someone in the eye. Speaking to people in personal terms makes the content more conversational, personal and relevant. It works.

With the possible exception of the recipe and home sections, nearly every spread in Redbook features at least one face. And these are happy people. The women, along with a few gorgeous men, are all smiling, gazing contentedly into the distance or glancing seductively at the reader. These are people you want to meet. It's no surprise that humans respond strongly to the faces of other humans. We do this from birth. So when you take a photo for your website, forget about the background and zoom in on the person's expression.

Have you ever noticed that nearly every feature article in the lifestyle magazines begins with an anecdote? Half the time, the tales are even fictitious. It doesn't matter. People respond to stories about other people. Stories are the most powerful way to communicate a message, particularly when combined with the other four secrets I've mentioned.

Ronald Reagan demonstrated, to the chagrin of his critics, that a single anecdote can overwhelm mountains of statistics. TV stations know that the video clip of the grieving parent or joyous lottery winner is better than all the economic analysis in the world. When seeking to make a point, find an anecdote that crystallizes the message. Let it set the scene for you.

There's one other tactic magazine publishers use that you won't ever have to worry about: those dumb subscription cards that fall out of the middle of the magazine and land on the floor. They're called blow-in cards, and everybody hates them, even the publishers who use them. Unfortunately, they're also one of the most effective circulation tools ever invented. Sometimes annoyance sells, too.