Is Bing Gaining? For Our Customers, Google Is Still 85% of Search Traffic

There has been a lot of speculation since the launch of Bing earlier this year about whether the new Microsoft search engine could take a meaningful amount of search traffic away from Google.

Now that Bing has been up and running for almost four months, it's a good time to measure its progress. Is Bing sticking it to Google? Is Yahoo catching up?

The short answer is no.

comScore recently released its August 2009 rankings for search engine Market Share. The results showed that Google, Yahoo and Microsoft (Bing) have market shares of 64.6%, 19.3% and 9.3%, respectively.

A study of HubSpot customers shows even more Google dominance, as you can see in the chart below. 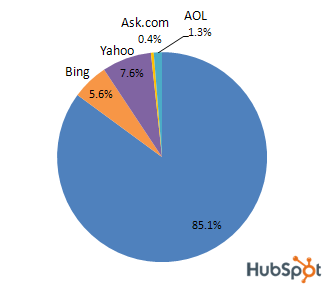 Google had over 85% market share versus Yahoo, Bing, AOL and Ask.com for this customer group. The results were fairly consistent for each industry with Google market share ranging from 82% for construction firms to 87% for software companies.

While Google's astronomical market share for these customers is much higher than what comScore reports, it's consistent with what we've been seeing anecdotally over the past year with other HubSpot customers.

More research would be needed to definitively know why Google holds such a strong position as the referrer to these customers relative to the other search engines.

It could be the sample set, a significant difference in characteristics of HubSpot customers versus the sites measured by comScore, or a difference in the way the data was analyzed by HubSpot and comScore.

Regardless, the takeaway is the same from both studies: Focus your SEO and traffic efforts on Google.

Website Traffic Down? How to Diagnose and Fix Traffic Drops