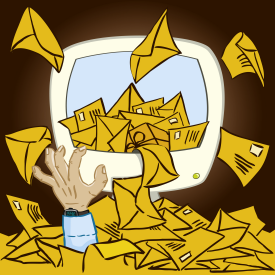 Be happy that you are not Bill Gates.

In 2007, he received about four million emails (that’s approximately 11 thousand each day), most of which were spam.   For us mere mortals, toiling in our cubicles, how would you feel about receiving over 9,000 email advertising messages per year?    That’s 25 marketing messages in your Inbox every day, and, according to recent research, nine of every 10 emails are categorized as spam.    And, j ust a few years ago, only half of our emails were considered spam.

The View From Washington

But, what can stop this onslaught?   In December 2003, President George W. Bush signed the CAN-SPAM Act into legislation.   Specifically designed to target the absolute worst offenders , the“Controlling the Assault of Non-Solicited Pornography and Marketing” outlined and standardized the requirements for commercial emails.   It also detailed the penalties for sending spam, something that was previously governed on a state-by-state basis.

Ethan Arenson, CAN-SPAM Coordinator at the Federal Trade Commission, offered the following in response to our questions regarding the legislation, “Overall, the CAN-SPAM Act is a very effective tool against those legitimate companies that step over the line.   It’s very difficult to target the worst offenders (scams, malicious, criminal behavior) because those businesses are often based overseas and beyond our reach.”

Arenson continued, “In the FTC's opinion, the compliance with legitimate marketers is good to very good.   Of course, i n the immediate wake of implementation, there was a learning curve but CAN-SPAM is not that difficult to comply with.”

When asked what he would like to see added to the CAN-SPAM Act given the current deluge of spam, Arenson answered,   “As it is written now, it is effective…the trouble is finding the criminal spammers that have no intention of complying with any law,” adding “About 18 months ago, three companies were prosecuted on the issue of Free Gifts.   Email recipients were told that they won a "Free Gift", but at the first tier, there was a low-cost offer; then at the second tier, another cost was added; and in the final tier, the “free gift” involved buying some large item.   Obviously, there was nothing free about the offer.   Because of the obviously deceptive subject lines, all three companies settled, one for $2.9 million, the largest civil penalty to date under the CAN-SPAM legislation.”

Arenson concluded by stating, "Marketers with legitimate companies just need to be conscious of the Act and follow it in order to be in compliance."

Overall, the best marketing practices for CAN-SPAM compliance is fairly simple.  Here are the five main points in the legislation:

3.       Add your company name and address to your email messages

4.       Allow opt-out by any means mentioned in an email (hotlink, reply to, Web-based unsubscribe requests)

5.       Train your customer service staff to capture and process any non-Web-based unsubscribe requests within the 10 business days deadline

There is a great deal of misinformation regarding CAN-SPAM.  Here are a couple of points that might help you when discussing CAN-SPAM with your marketing organization:

1.       CAN-SPAM allows for the promotion of commercial email to no-opt-in names, as long as the email is labeled as an “Advertisement”or “Solicitation.”   However, your Email Service Provider may not allow that email send.   And, remember that ISPs will use the promotional consideration as a way to filter your message from the Inbox.

2.       CAN-SPAM allows for the promotion of adult content in commercial email as long as the words SEXUALLY EXPLICIT appear in the subject line.   Again, it is likely that ISPs will block those emails from the Inbox.

For more background, here is a link to the  FTC's CAN-SPAM information page .

Everything Marketers Need to Know About Sender Scores

29 Email Deliverability Tips You Must Know in 2020