I read "Blue Ocean Strategy" by Kim & Mauborgne recently and thought it was compelling. I thought I'd give you some excerpts from the book and use my current startup as a case study to explain some of the Blue Ocean concepts. I'm hoping it will spur thinking and feedback from you.

The theme of the book reminds me a lot of what my strategy professor from MIT Sloan (Arnoldo Hax) used to talk about when he quizzed us on cases. He repeated over and over again that we should "watch our competitors, but never follow them" and that we should "play a different game on the same field as the competition." This professor used to stress that within marketplaces, conventional wisdom about the rules of competition build up and that over time, those rules become irrelevant to potential customers. 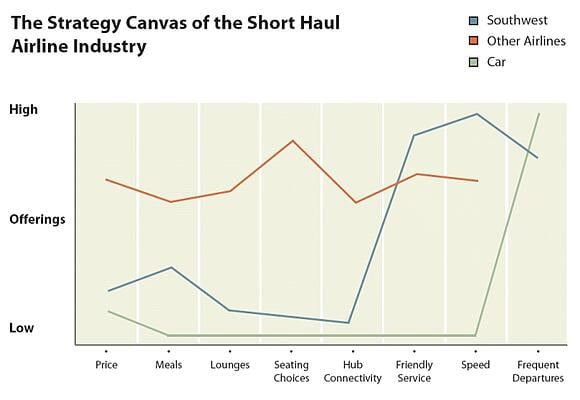 Rather than summarize, I thought I would give you a few quotes that lay out the theme in the authors' words:

"The only way to beat the competition is to stop trying to beat the competition. In red oceans, the industry boundaries are defined and accepted, and the competitive rules of the game are known. In blue oceans, competition is irrelevant because the rules of the game are waiting to be set. ...The companies caught in the red ocean followed a conventional approach, racing to beat the competition by building a defensible position within the existing industry order. The creators of blue oceans, surprisingly, didn't use the competition as their benchmark. ...Instead of focusing on beating the competition, they focus on making the competition irrelevant by creating a leap in value for buyers and your company, thereby opening up new and uncontested market space. …Value innovation is based on the view that market boundaries and industry structure are not 'given' and can be reconstructed by the actions and beliefs of industry players. …To fundamentally shift the strategy canvas of an industry, you must begin by reorienting your strategic focus from competitors to alternatives, and from customers to non-customers of an industry. As you shift your strategic focus from current competition to alternatives and non-consumers, you gain insight into how to redefine the problem the industry focuses on and thereby reconstruct buyer value elements that reside across industry boundaries"

The first example in "Blue Ocean Strategy" is Cirque de Soleil. The criteria/boundaries/rules for the circus industry that were "taken for granted" for decades included: animal shows, star/famous performers, multiple shows at the same time (i.e. 3 rings), and pushing concession sales. Rather than keeping a high emphasis on all the existing rules and then creating new ones, they either eliminated or reduced many of those rules and created a bunch of new ones. In the process, they increased value for their target market while lowering their own costs.

A key thing they did at Cirque de Soleil was that they looked across market boundaries to alternatives to the circus. It ended up being part circus and part theatre. Rather than focus on the market boundaries, they focused on the job the customer was hiring for -- in this case, it was adults looking for sophisticated entertainment. Another key thing they did was not targeting the existing market (i.e. children), rather they targeted non-consuming adults. Blue ocean strategy is all about creating and capturing net new demand by ignoring boundaries defined by traditional competitors.

The authors are big on stressing that new technology rarely turns into a great company. They state that unless the technology makes buyers lives dramatically simpler, more convenient, more productive, less risky, or more fun/fashionable, it will not attract the masses.

The Blue Ocean Strategy authors propose a graphical framework for helping readers understand the book and for helping businesses create blue oceans of their own. Here's an example of the tool applied to Southwest Airlines, who are an interesting case. Southwest entered a terrible marketplace that a Porter five forces analysis would have said was a blood bath. The criteria/rules/boundaries of the airline industry are listed along the x-axis. Most of the major airlines played the same game with only the slightest of nuances. Southwest eliminated many of the rules/criteria in the industry, reduced focus on some of the rules below industry standard, raised focus on some of the rules above industry standard, and created a new rules of their own. The way they were able to do that was they targeted non-consumers (family/shorter trips v. business trips) and they looked across industry boundaries at alternatives (cars v. planes) as their competition v. looking at traditional airlines. Only by de-emphasizing some of the existing rules were they able to lower costs enough to compete in this new market. 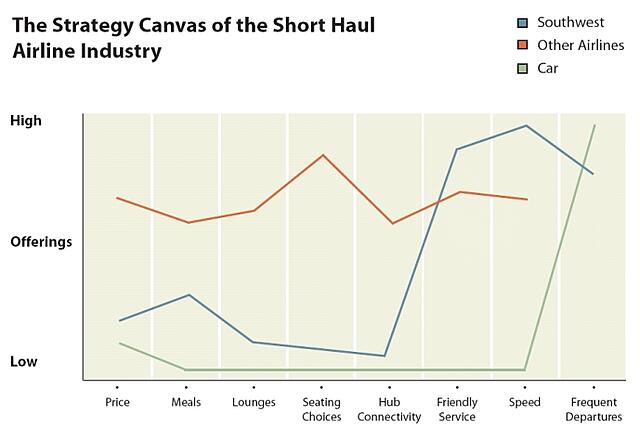 They encourage the reader to come up with their industry's "standards." They then give the reader four questions to which you can start thinking about your company/market from a blue ocean perspective:

The book suggests that an ideal strategy has 3 qualities: focus (not too many criteria), divergence (from the alternatives in the framework), and a compelling tagline.

I used their framework/4-questions to create a draft of how we think about the Customer Managed Relationships (as opposed to CRM) marketplace. HubSpot, an Internet Marketing company, is targeting a non-consuming market (small businesses only) vs. targeting companies who already have information technology tools in place. The job HubSpot is focused on being hired for is not "tracking" customers, but helping these very small businesses (VSBs) grow revenue. In our target customer's mind, the competition for HubSpot probably isn't Salesforce.com, but rather is alternatives like hiring an SEO consulting firm, hiring an outsourced lead generation firm, hiring a new VP of Sales, etc. In fact, _____ is hiring a new VP of Sales, hired an outsourced lead generation company, hired me as a consultant, and implemented Salesforce.com.

Putting our CMR money where our mouth is, we will eliminate the large sales force to push this type of thing as is used by much of the industry. Rather, we should spend the same amount of cycles a traditional software company would on building a "sales force" to creating an innovative "referral force" which provides rich incentives for our customers to refer us to other small businesses as that is the way small businesses tend to make decisions.

Our target market has not moved over to running their businesses on the internet because they simply don't know how to do it and do not have anyone to help them. The existing tools are just too hard.

Therefore, I think we should reduce emphasis relative to the industry on feature richness/depth and on platform/add-ons (small companies do not have resources to deal with the complexity of multiple vendors products). For the same reasons, I think we should increase emphasis ease of use, help (video, audio, searchable via most frequently asked or tag cloud), integration (key features from several apps selected by HubSpot and provided to small businesses), and familiar user interface (i.e. like Office). We should also think about increasing emphasis on "handholding" and "advice" which is apart from traditional support and consulting.

We should look across industry boundaries and provide some of what our target market gets when they hire a consultant or a new employee -- good advice and hard to obtain knowledge. Our blog should not drone on about web2.0 and whatever else pops into our head like others' do, rather it should be "how to" advise on growing revenue by leveraging easy-to-use technology. Since we are passionate about strategy, we should weave some of that stuff in there as well as it is directly relevant to how to grow revenues.

We might steal a page from other types of service companies and provide our customers with a monthly email on their progress on the top of their sales funnel relative to when we first came across them (pagerank, visitors, RSS subscribers, avg pages/visitor, etc.), metrics relative to their peer group, some standardized advice based on how well/poorly they are doing like the way realage.com does it, potentially a grade (maybe a red, yellow, green would suffice), and we might give them an hour a year for a "how we doin'" checkup with one of our MIT-trained consultants.

We have talked a few times about creating an eBay for small service companies. This idea reaches across market boundaries and helps our customers with the job they are hiring us for: growing revenues. When you think about HubSpot itself, we are a very small business and we have spent money with several other very small businesses: outside accountant, outside law firm, a video producer, several designers, freelance developers, etc. About half of these services are examples of long-tail services where we found the vendor over the internet. Why not create a section on our website that helps remove friction from the process of connecting long-tail service firms with each other using the internet. We could start with it being just a simple external facing tracker application where companies can enter information on service firms they do business with, share comments, and rate them just like they would do a movie or restaurant (1-5 stars), with the ratings simply doing a moving average.

One other aspect of this CMR angle that I like is that there are shifts happening in the marketplace that companies are starting to become aware of that they will need to take action on. For example, in two years, the Google PageRank will become a common topic of conversation at the operations committee meeting of almost every company in our target market. It reminds me a bit of selling software to manufacturing companies in the mid-90's. All of them knew they needed to get their product catalogues on the web, but didn't have any idea how to do it.