How to Kill Your Viral Marketing Contest 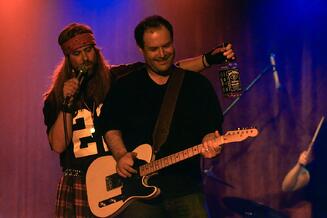 This is a guest article written by Ilya Mirman, VP Marketing at Cilk Arts, a HubSpot friend and customer. You can follow Ilya on Twitter @IlyaMirman .

The " Your Next Record " contest has all the makings of an absolutely kick-ass idea. Submit your band's songs, promote it using viral marketing tools and techniques , and you have a shot at the greatest prize in the universe: Slash (the legendary guitarist from Guns N' Roses) will write, record and perform your single.

Well, I've been a huge Slash fan since I first heard GNR in L.A. in 1987. Over the years, I've dressed up as Slash for Halloween (alongside a beautiful Axl), photographed him in venues large and small, and attempted to play with the world's most fun GNR tribute band, Mr. Brownstone.

So when I heard about the contest, I thought it'd be a blast to participate. With a couple friends, I formed the "supergroup" Filthy Knuckle , and we wrote/recorded/mixed three songs in an evening. (Two of them suck, but one has actually grown on me: "Motel Detroit." I think it's sloppy, but has an arc...)

And then it was off to the races: use all the things HubSpot has taught us about turning our band page into a magnet for traffic, inbound links, viral interest and ultimately conversions (votes in our case). In fact, the contest organizers gave some great advice on how to promote your band in the age of the Internet -- network, embed, drive press, etc., -- and they've come up with "Buzz Factor," a metric based on band views, plays, etc.

BUT: The contest organizers -- perhaps unwittingly -- added a HUGE speed-bump into the mix.  In order to vote, fans must first REGISTER, answering all sorts of questions and sharing data they might not want to share just yet (e.g. their contact info, demographics, etc.). The result is that this inevitably reduces the pass-along value. Rather than viral spreading (with each person voting and then telling at least one other potential voter about it), we now have a dramatic reduction filter of 95-98% at each connection, given that the vast majority would not bother to register. So for all the work and investment Guitar Center and Slash put into promoting this, building widgets for people to share via Facebook and MySpace, every visit when that hurdle is in place represents a missed opportunity.

And while some friends have certainly helped spread the word about Filthy Knuckle, I know the hurdle has cost us at least one substantial endorsement: that of my brother, comedian Eugene Mirman . No, it's not because he still holds a grudge for his broken thumb or stitches on both eyebrows acquired during the decade that I was bigger than him. Rather, he didn't want to impose on his 26,000 Twitter followers to go through the contest registration hassle.

Many of the bands have figured this out and have found a bit of a way to game the flawed system: since we are all registered, it's far easier for us to vote for each other than to get unregistered friends (and their friends) to vote. As a result, we are seeing bands offering to trade votes, become each others' fans, etc. The top band has 15 fans...we have 11. WTF?!

(By the way -- how's Filthy Knuckle doing? Ridiculously awesome, for some strange reason. With a Buzz Factor of 99.59, we are in the top 20 out of the 3,500 bands. I seriously can't figure that out, because these are real musicians, many with a great sound.)
What to do NOW?

The good news is that the contest will go on for several more weeks. So, I have three suggestions:

1. Guitar Center: Remove the "need to register in order to vote" hurdle. You'll be glad you did. There will be a ton more traffic and votes, which will further help separate the wheat from the chaff. (And yes, I'll be first to admit that "Motel Detroit" is chaff.)

2. HubSpot blog readers: Vote for Filthy Knuckle ! (Seriously -- there's no better way to communicate the problem with the registration hurdle than hijacking the contest in a fun direction.)

Live Webinar: The Science of ReTweets With Dan Zarrella