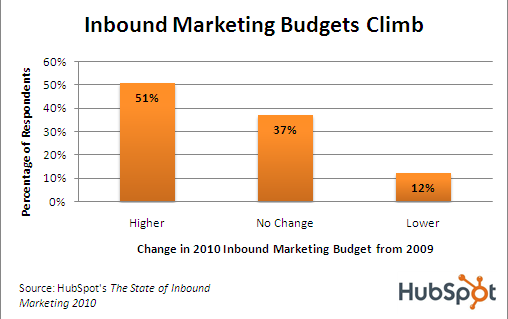 Additionally, those surveyed said inbound marketing channels are more important than any outbound channel. Specifically, social media, blogs, and organic search engine optimization are of greatest importance. Eighty-five percent of respondents rated company blogs as "useful" or better in 2010. And Twitter moved into the second spot with 71% saying it is "useful" or better, compared with 39% in 2009.

Why Spending has Increased

Businesses that are increasing inbound marketing budgets said they're doing so because of "past success with inbound marketing" (58%).  Success includes lead generation and client/customer acquisition:

The small minority of businesses that are reducing inbound marketing budgets are doing so almost exclusively due to economic conditions.

What about you? Are you doing more with inbound marketing this year? What success have you seen?

Webinar: The 2010 State of Inbound Marketing

5 Ways to Explain Inbound Marketing to Your Family This Thanksgiving