Since Facebook announced its  new social plugins  designed to become the web's identity system, marketers have been buzzing about Facebook.

Clearly there's a lot of potential in using Facebook for business -- but how does it compare to using Twitter for business ? And is it right for your business?

To answer those questions, I took a look at data from over 2,600  HubSpot customers . I looked specifically at the number of followers each company had last week on  Twitter  and  Facebook  (we call it their reach on each channel).

Here's what I found: 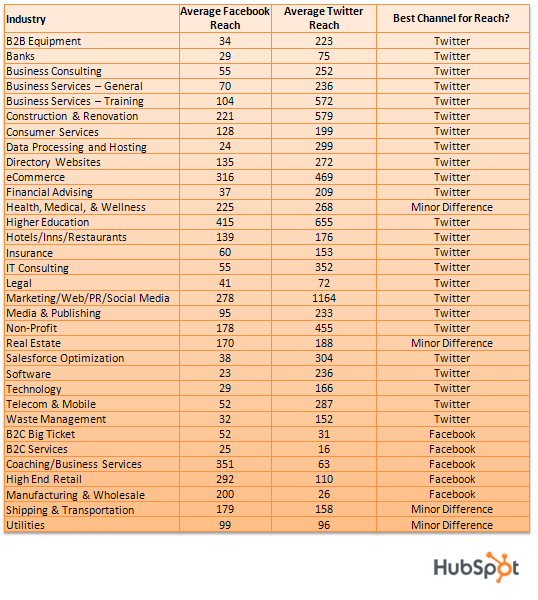 So which platform is best for marketers concerned about reach?

Don't Pick One -- Create a Presence on Both
Of course, more than indicating that one platform is better or worse than the other, this data is another sign that businesses need to engage on  both . The pure  scale  and ambition of Facebook makes it a critical platform to participate in. But this data from HubSpot customers shows that you can't dismiss Twitter. In many industries, Twitter is a better way of reaching potential customers..

Bad Excuse: My Industry Doesn't Use Social Media
Another thing this data makes clear: It doesn't matter what industry you're in, you should be experimenting with social media. Check out the reach manufacturing and waste management businesses are getting! And not just one -- that's an average of at least 10 businesses.

A few words about how I got these numbers: I pulled data for more than 2,600 HubSpot customers (the average company in the sample has 100 employees). Once I had that data, I sorted the companies by industry and calculated the average Twitter and Facebook reach for each industry. I removed industries that had less than 10 companies. All the companies I sampled were using some sort of social media -- they had followers on Twitter, Facebook or both.