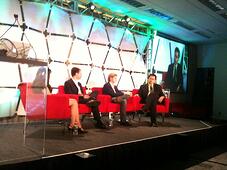 Chris Hughes  is a man of social wisdom. From co-founding Facebook to developing President Obama's powerful online campaign to now creating Jumo, another social startup, the tech guru has much to share about the role technology plays in social change.

Along with  Scott Heiferman , CEO of Meetup , and  Reshma Saujani , NY Congressional Candidate, the trio took part in a robust panel at the  TechCrunch Disrupt conference , weighing in on an increasingly important question: As digital tools create communities, how will they create change in the offline world?

The panelists explain that today's online world is about creating a culture of sharing, whether it be content through blogs, photos through Flickr , or status updates through Facebook . Relationships are key to building social platforms, and it's crucial to empower people to nurture these relationships beyond just the internet.

A fitting example is Meetup , a site designed to help people self-organize and meet each other, with the goal of improving themselves or their communities. CEO Heiferman explains: "The world needs an easy way to meet up with people. The most amazing things happen when people meet up. This is more important than the iPad."

Having a concrete message attracts fans, who become avid followers, who, when united together, become a movement. "With existing networks, it's easy to build a movement. You have to make sure that energy turns into practice and action," states Hughes . Obama's campaign followed a similar route, whose advocacy for change drew in fans and followers and ultimately, sparked a movement.

Social networks allow people to connect with each other and build relationships online. Businesses and brands take advantage of the growing popularity of social media to interact with consumers and create a personalized image online. How about beyond the web?

Take social networking to the next level and have people meet in person. Create a Meetup or some type of offline event and have people come in contact with other like-minded individuals, who all share the common grounds of knowing your brand. Such meetings spark new thoughts and ideas, which will 1) benefit your company, 2) inspire social change in communities, and 3) create a sense of inclusion among fans. Taking social networks offline is an emerging trend, and the first step to true social change.