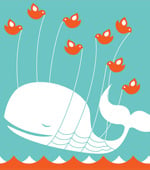 Twitter is a fantastic network for businesses. You can monitor your brand to garner valuable feedback, keep tabs on the competition, engage your customers in conversation, or even choose to use Twitter as a customer service channel. But there are several common mistakes that companies make on Twitter.

Here are 9 Twitter for business strategies to avoid , as well as how to remedy them.

Would you want to have lunch with someone who only talked about themselves, and didn’t even ask you how your day was going? Of course not. So why should you act that way on your Twitter profile? Instead of having a Twitter profile full of self-promotional news or links to your own website, share other interesting, educational, or even funny industry news from websites other than your own. You’ll build a following more quickly, and you’ll likely be retweeted more often . And it’s not unprofessional to ask your followers how their day is going.

2. Only Include Links to Your Own Blog

Ever see a Twitter profile of someone with 10 followers who’s following 10,000 people and think “oh, they must be interesting!” Me neither. If you follow a ton of just anyone, not only will your Twitter stream be filled with irrelevant content you don’t care about, but you’ll look spammy to people who see your skewed follow numbers. Be picky about who you follow, especially in the beginning. You can use Twitter Search or Twitter directories such as Twellow or WeFollow to find people interested in your industry and what you're talking about.

Your company Twitter page shouldn’t just be a corporate Twitter page; this exudes a stuffy tone that nobody wants to follow. Some of the top brands on Twitter actually put a face to the person behind the tweets, such as Comcast and Zappos . You can even just link to the profiles of people behind the tweets in the bio section, which is what Ford does. These personal touches will attract more followers than hiding behind a corporate logo.

Keeping your Twitter profile hidden from your website visitors, the people most likely to actually follow you, is never a good idea. Add a Twitter badge to your website, and even add a feed of your tweets to your blog. Make it easy for your visitors to find out how to connect with you in social media.

7. Don’t Monitor Your Own Brand Chatter

If you think that monitoring your brand on Twitter is too time consuming, you’ll be glad to hear that monitoring all of your business’s social chatter takes only ten minutes a day . Use free tools like Twitter Search or TweetDeck to monitor conversations taking place about your company on Twitter in real-time. After you complete a Twitter search, you can even click “Feed for this query” and add it to your RSS reader for monitoring.

Not customizing your Twitter profile is like blending into an anonymous crowd. Did you know that Twitter accounts with a profile picture have 10 times more followers than accounts without pictures? And that having a Twitter bio gets you 8 times as many followers ? If not, there’s your reason for doing so. Also, brand your business on Twitter by having a unique Twitter background.

If you tweet only once per week, it will be hard to get noticed in the Twitter streams of people who follow thousands of even hundreds of users. But if you follow some of the advice above, by taking a few minutes each day to retweet interesting tweets and share relevant content , you shouldn’t have a problem here.

What would be your #10? Let me know in the comments below!