The State of Podcasting [Data] 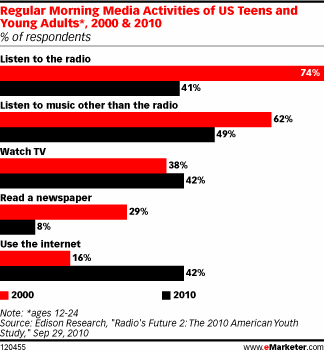 Tom Webster from Edison Research took the stage at BlogWorld Expo to present some brand new research about the current state of podcasting.

Podcasting first experienced growth in 2006, but since 2006, many of the early pioneers and businesses no longer exist.

According to Webster, podcasting is doing better now than ever before. Grammar Girl, NPR and ESPN were cited as examples of current, successful podcasts. Podcasting is the concept of producing various types of media (e.g. video, audio) that get downloaded from the internet, often via RSS feeds.

Today in 2010, 45% of all Americans are aware of podcasting, while 23% of Americans listen to podcasts, which has increased from 11% in 2006. In addition, video podcasting viewership is up to 20% of Americans in 2010. It is estimated that 70 million people have listened to or viewed a podcast.

Webster asserted that one of the main problems contributing to podcasting's lack of growth is that of convenience. Because people have the option of listening to or viewing podcast content any time they want, they will often push off consuming that content until never. This means that great podcasts need to be topical and timely to help create urgency.

In the most recent Edison survey on podcasting, the report found that age groups listening to podcasts have been redistributed to an older demographic compared to the previous year's findings. Sixty-four percent of 12 to 24 year olds don’t subscribe to podcasts. Instead, they consume content on demand, meaning they access computer-based players and listen to podcasts individually without subscribing.

Webster asserted that local news and information coverage is becoming scarce. Newspapers are failing, and most local TV and radio stations are simply using national programming with minimal local programming. This lack of local coverage, asserts Webster, creates more opportunities for podcasters. This is heavily due to the commoditization of music listening by services such as Pandora. According to Webster “traditional media is abandoning local.”

According to Webster, podcast consumption is happening more on the desktop as opposed to downloading content to mobile devices. Sixty-six percent of podcast listeners use Facebook, meaning that building distribution beyond iTunes is critical for podcasting success.

As a marketer, Webster advises capturing local coverage and the 12 to 24 age demographic for some ripe podcasting opportunities.

How does your business use podcasting?

The Top Business Podcasts You Need to Be Listening To