Inbound’s Next Industry Disruption: The IT Reseller World 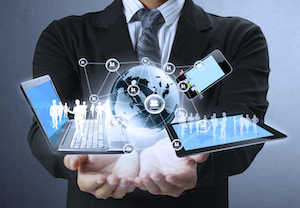 The IT reseller community, consisting of Value Added Resellers and Managed Services Providers community, has been a key channel for technology companies for the last 25 years.

Industry giants like Microsoft, Cisco, IBM and hundreds more have built their empires on the backs of this group of entrepreneurs.

However, there are two major shifts that are threatening the viability of this community and it’s likely that the majority will cease to exist in the next five years.

The Switch to SaaS

The first major shift is the move from on-premise to cloud-based software and hardware, typically delivered in a Software-as-a-Service format (SaaS). This trend, first popularized by Salesforce.com and now the dominant software model for start-ups in the last 10 years, reduces the need for large on-premise installation projects – the bread and butter of the reseller community.

Deploying SaaS software may still involve setup but the size of this up-front investment is a fraction of its on-premise brethren and why this model appeals especially to SMBs (the IT reseller’s target segment). In a world where most software and hardware is in the cloud how will resellers earn money?

Surely it will not be from margins granted by the software or hardware they are reselling, which while significant, are the minority of a reseller’s revenue stream.

CMOs Will Control The Budget

The second major shift threatening this industry is Gartner’s prediction that by 2017 the majority of IT spend will be made by Chief Marketing Officers, not CIOs. This is not yet another hype-laden prediction by Gartner as evidenced by the major software houses bulking up on marketing software:

But the reseller community has grown up selling to the CIO and has all its contacts there. What happens when the primary buyer for resellers is no longer the main spender?

Addressing these challenges is not for the faint of heart and it’s quite probable that most resellers will not be able to adapt. It will demand a rethinking of what services resellers offer and even how they generate business.

One way this could play out is how HubSpot’s own marketing agency reseller community developed – which now numbers more than 2,000 resellers and drives a significant portion of our revenues – in the face of similar circumstances.  Let’s take a look at how that community adapted.

From Project to Retainer

The first parallel is how modern marketing agencies are moving from projects to retainers as their main revenue model.

Marketing agencies of old offered outbound-marketing projects, typically an advertising campaign.  But in an inbound world, where buyers don’t want to be interrupted but rather are the ones initiating interaction with a brand, agencies are realizing they need to offer content marketing services so that buyers find this content when researching a brand. And such services need to be recurring because the volume of keywords being searched each day expands to cover new topics.

Similarly, IT resellers need to move to a recurring revenue model and offer services on the software most in demand today – inbound marketing and marketing automation software.

In this SaaS world, IT resellers can provide a managed service consisting of change management, process reengineering, reporting and analysis, and move from $20k - $100k up-front projects to $2k-$10k/mth retainers, just as marketing agencies did with their move to retainers.

The Shift to Inbound

The second parallel is how the marketing agency community has had to grow beyond its traditional channels of generating business: referrals, events and cold calling.

Enough has been written about the ineffectiveness of trade-shows and cold calling to generate business so I won’t belabor the point.  Referrals worked well in the past (unpredictability aside) but increasingly buyers are researching solutions online rather than blindly trusting referrals.  Indeed, a statistic from Corporate Executive Board, and cited here by Microsoft Dynamics CRM’s Seth Patton, suggests 57% of buyer research is completed before a vendor is ever contacted; you can bet this includes referrals as well.

For marketing agencies this has meant that they need to be found online – easily and quickly – for the terms CMOs are searching for. Marketing Agencies in the HubSpot program determined that they need to implement Inbound Marketing for themselves and blog consistently on topics of interest to their target CMO persona.

Historically IT resellers have done a poor job of marketing themselves, often seeing marketing as a necessary evil. A major shift in mindset is required for IT resellers to reach their new buyer persona – the CMO.

And the shift will happen in two steps: first, market yourself better and second, use the knowledge of how you marketed yourself to become an expert in answering the CMO’s questions on technology decisions. The most economical way of doing both is to implement inbound marketing for the reseller’s own businesses, the same way marketing agencies did.

Six years ago, HubSpot’s reseller program launched with the vision of two men: Peter Caputa, VP of the Channel Sales team, and Paul Roetzer, HubSpot’s first partner.  You only have to meet these two for a few minutes to realize how far ahead they’re thinking.  In particular, Paul has been a leader in the marketing agency community with blog posts, books and sophisticated tools outlining how agencies can adapt to the changes facing their industry.

Of the 60,000 odd agencies in the US we’ve only seen 2,000 adopt Inbound as a core offering but they grew on average 40% last year. A similar small fraction of the 300,000 IT resellers worldwide will adapt and thrive to the coming changes and the trend will start with a visionary like Paul. Are you that leader?  If so I’m eager to speak with you.