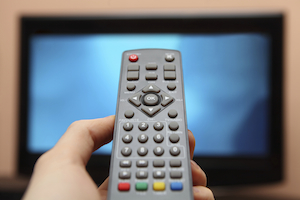 When most of us think of inbound marketing, the same things come to mind: blog articles that explain top-of-the-funnel concepts, compelling calls-to-action that tease more in-depth content, and valuable e-books that flesh out complicated topics in further detail.

Our hope? That this well-researched, detailed, premium content will be the spark that ignites a meaningful conversation and that guides an interested and qualified prospect through the sales funnel.

Over time, maybe they'll even become a brand advocate, essentially advertising your goods or services for free because you've formed a real and rewarding relationship with them.

But even the most dedicated inbound marketers know that media like television, radio, and even outdoor ad space like billboards can offer value to brands. That's because inbound isn't a series of tactics: it's a philosophy. Some print ads can be considered inbound, and some blog articles could be considered to be very traditional!

To prove my point, I've highlighted a handful of commercials. Each is an example of how the concept of the "television commercial" has evolved in the digital age. Each is a paradigm for what I consider to be the criteria for content to be considered inbound. Let's get started.

Calls to Action: Call (1-855) NEED-LOVE; watch the NBA on ESPN, Wednesdays and Fridays

This :30 spot doesn't seem to be very inbound at first glance. It takes a lighthearted humor-based approach and doesn't really highlight the television program's features, meaning it's not truly making an argument for why this particular program should be your "destination for games." It doesn't say they provide the most expert in-game analysis or the most in-depth highlights as they discuss the game in the studio after its completion. It's just silly.

But what this commercial excels at is selling the real product and an understanding of the NBA brand itself. What makes The Association stand out from other major sports leagues isn't just the style of play or the product on the court. It's also the personalities of the players, many of whom seem larger than life (and not just because Kevin Love is 6'10"). The NBA is entertainment and style and every player has their own personal brand. So highlighting the personalities of the players is genius, because they're selling what their audience is already eating up.

This particular spot also encourages viewers to call the very real(ish) Kevin Love hotline which, at the time this spot ran, connected you to a voice recording of Ricky Rubio informing the caller that the hotline was facing legal repercussions and was temporarily out of business. A call-to-action that doesn't provide value in the traditional inbound sense, but that does provide value to fans of the game in the form of continued engagement and entertainment.

2) Inbound Marketing Targets its Audience Without Being Intrusive

This commercial highlights a very specific element of inbound marketing. At first glance, it's as traditional as they come: a full :60 that focuses on what their product has to offer. Sure, it tells a story, and sure, it's entertaining, but isn't there still that very traditional underlying message of use our product?

But it turns around the traditional commercial by asking a very simple if not difficult-to-answer question: what are you really searching for? Google has never been about the utilitarian use of a product, it's been about providing a seamless way for its offerings to interact with one another and make your life easier. In simpler terms, it's about you, not about them. And that's what this commercial does very, very well.

It tells a story through the eyes of a person trying to tell their own story. It's broken, uninterruptively, by someone searching for an answer - and finding it. Google is their guide to the solution they're seeking. It doesn't come out and scream OUR PRODUCT IS THE BEST because it doesn't have to. We already know, we're just being reminded.

And it's not just thinking about who its audience might be but turning the corner and telling them their own story. Maybe you've never set out to create your own short film or even your own home movie, but you've certainly needed to know something before. And odds are, you used Google to find that missing truth.

And isn't that what we're all looking for? Take the very inbound-y example I opened this article with: you read a blog and follow through the conversion channel all the way to becoming a brand advocate. But in this example, instead of being waylaid by product details, you're reminded why this product you're already familiar with is the best: not just because it gives you the best search results, but because it helps you tell your own story, literally or figuratively. It makes your life easier. It functions both as top-of-the-funnel content and messaging for brand advocates that become re-engaged or re-inspired by this :60.

Not surprisingly, GoDaddy.com has always been very inbound-y: the first spot I remember seeing from them was during the Super Bowl years ago, when they had one advertisement banned and later teased us with some unsavory and too risqué for television content we were told was only available if we checked out their website.

Well, I never actually did that. But I'm sure a lot of people did, and they were one of the first brands that came to mind when I sat down to start writing this article. I remembered those commercials and it's been almost ten years!

The ad I've chosen today takes a different approach, and I think one that's a far more valuable interaction for their brand. Their first ads were top-of-the-top-of-the-funnel: completely centered around brand awareness through shock marketing and hoping to generate word-of-mouth around the water cooler the morning after the Super Bowl.

This advertisement is better, I think, because it not only tells a story (and one that's at least sold as a real story) but because it also shows the value of what their service does.

It's also very inbound-y: if you visit PuppetsByGwen.com, you see what your startup could become with the help of GoDaddy's web hosting service! You can go learn more on their website and even get started with your own domain name. Or, you can join the conversation by using their hashtag, #LiveYourDream, and maybe even meet some other people with similar aspirations.

What's so spectacular about this 3:18 video that demanded its inclusion on this list? It's the first YouTube pre-roll I've watched in probably 18 months. Other than movie trailers, I'm usually pretty eager to click the "skip to video" button and when it's not available, I become angry and violent.

But this just seemed different from the beginning. I have to throw out the disclaimer that I'm not convinced these interviews are legit (I think many of them, if not all of them, are actors) but there's still genuine emotion here, because I think these girls believe in the message behind the movement.

And that's what it really is: a movement. By becoming something larger than a product or a brand, Always has encouraged girls to participate and even to contribute user-generated content on Vine, Instagram, and YouTube.

This is emotionally-based content, it tells a story that's very true and accessible to most people that watch it, and it fulfills all the previous criteria on my list. It knows who its audience is: young girls or women that used to be young girls that lived everything this campaign is fighting against. It encourages its audience to get involved and because it's so emotionally compelling, it encourages people to come back and re-share it.

I've come back to this ad a handful of times myself since viewing it for the first time about a month ago. I've even used it for brand inspiration, because I think it's a glowing example of content that reaches the core of a brand. It's content that, first and foremost, tells a story that resonates with its audience, showing that they really understand who it is they're trying to help - and why they're in business in the first place.

It's not about their product, or even what their product does. It reaches people emotionally on a deep level, and then (this is the INBOUND part!) immediately offers not one, not two, but three ways to continue to interact with this campaign.

And that's what inbound marketing is. It's not just providing your audience with something they're looking for, like the answer to a question, the solution to a problem, or even an emotional experience. It's also rounding the corner and giving them another path to follow, another way to build a relationship with you.

And that's what these ads do. Even "traditional" content can be inbound when it considers its audience and offers ways to continue to engage the brand and seek further value.

This article originally appeared on Element Three's blog. Element Three is a HubSpot Partner Agency located in Indianapolis, IN. 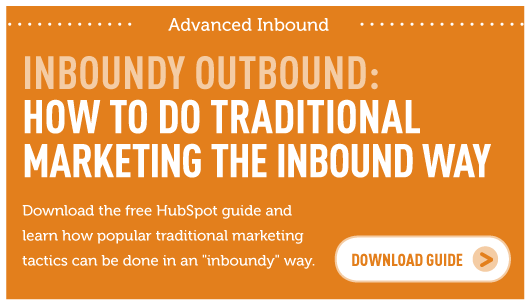