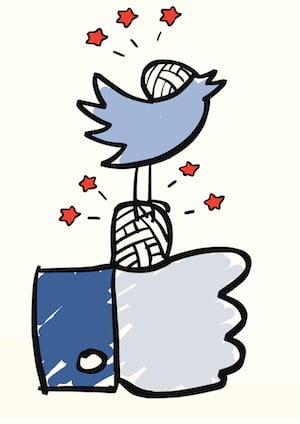 So you read an article one time from that one website and the author told you that this new social media site was the ultimate lead generating machine.

Then you ran (not literally, of course) over to that social media site and created an account. You spent about ten or so hours digging into what that site had to offer, maybe sent out some cool posts, connected with a few people, and generally just wasted a bunch of time.

You may or may not have ever logged in again. And if you did, you had to cut yourself off after 30 minutes for fear of another lost day.

The problem here is that oftentimes people latch onto new social media tools that are praised for "business growth", get pumped about that tool, and then don’t use it because it doesn't really add any value to what they're trying to accomplish. Why? Mostly, it's for two reasons:

According to schools.com,social networking sites are a top news source for 27.8% of Americans, ranking below newspapers (28.8%) and above radio (18.8%) and print publications (6%). They can be extremely beneficial for your business as long as you focus on the right ones.

There are a ton of articles out there that dig into each specific site, so I want to stay pretty broad. Nonetheless, here are four signs that a social network you're utilizing might not be that good of a fit.

1) You're Not Sure Why You're Using It

This is similar to what I was talking about above. You’re using Facebook or Twitter because some article told you to, or because you heard it generates great leads, or your friends that runs a completely different business found some success on it.

You heard through the grapevine that it brought some success and you want in, which is completely understandable.

Regardless of why you’re on the social media site the real problem is that you don’t have a plan and therefore not seeing the ROI of actually using that site. You’re simply just there to be there.

The solution here is simple. You need to develop a clear marketing plan for the social network, with your goals in mind. If it doesn’t look like this social network is going to help you achieve these goals after hashing out a strategy, it might be time to ditch it.

Now, I’m not saying just because you don’t know why you’re using it means it’s not right for your business. Find out what benefit this site is bringing to your business by creating and analyzing goals. If you can clearly see the benefit or know what analytics will help you after you implement goals then keep it!

If you’ve come up with awesome goals and found a tool or strategy to analyze these goals but you still aren’t getting results, then it might be time to hit “delete.” If you have no idea how to easily and efficiently meet your goals, measure the benefits and find that ROI then ultimately it’s a waste of your time.

2) You’re Not Reaching the Right Audience

If all you hear is crickets on a social media site then it’s time to exit stage left. Do you post on a regular basis and get no likes, retweets, +1’s, or whatever other engagement terms the next social sites have come up with?

Build an audience by reaching out to them; don’t expect them to just come to you. It takes a while to build an audience and nobody expects you to have 50,000 Facebook likes right away.

After you’ve reached out to your audience, run some promotions, and you still aren’t engaging with your audience on that platform then it’s time to keep the train moving along.

Now you might be saying, “Hey! People are listening to me, I’m really funny and clever and everyone loves my posts.” That’s great, but ask yourself: "who are these people exactly?" If they aren’t people who are going to purchase your product or service or enhance your brand in some way then it’s probably not worth it.

So, if you don’t have 500+ pictures of desserts, then maybe Pinterest isn’t for you. (But really, the food section is dangerous).

Point here is that content is key in any type of marketing. Maybe your audience is actually on a social site and they want to engage with you, you’re just not sharing the type of things they want to see.

If you don’t have the right content for social media sites, then you probably need to start creating better content. Blogs, infographics, photos of current projects, company culture pictures, premium informational content such as eBooks, webinars, anything you can think of!

Social media is all about sharing what you know and giving your audience insight into what your company is really about so creating content that content will cure your content cold!

You can probably remedy this situation pretty easily. But sometimes your audience doesn’t want to see your content on that site. We’ve heard about a lot of marketing agencies having success on Pinterest but even though we have awesome visual content we just can’t seem to tap into it.

Sometimes you have to realize that your efforts are probably more useful down other avenues, especially if you’re a small business.

You can get away with posting on Facebook twice a week if that’s what you really want to do. Pinterest could be even less. Twitter could be up to 20 times a day. If you aren’t posting things on these sites as often as you should be then your account is going to look outdated and you’re business is going to look silly.

A lot of social media sites have implemented scheduling posts into their platform or you can find an outside tool that will help you do it. If you can take an hour or two out of your week just to schedule posts for the next week it’ll help you stay on the ball and not seem like you’ve forgotten about all of your social media friends!

If you don’t have time to schedule posts or keep up with posting in real time then you should delete. There is nothing worse in my opinion than an outdated social media site. It makes you look unprofessional and untrustworthy.

Don’t let trends get the best of you! Just because someone tells you that this site is the best thing since Facebook doesn’t mean it’s right for you. Assess your goals, content, audience and time to figure out if it’s worth the effort.