The Evolution of the Marketing Campaign 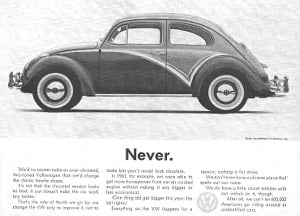 In the good 'ol days, marketing was easy. If I wanted to sell coats in 1905, all I would have had to do was put up a billboard that said "BUY BEN'S COATS!" and everyone would buy one until I had no more coats.

Okay, so maybe that's not true. Maybe it wasn't that easy. But compared to marketing in 2014, things were far simpler. The truth is, from the advent of advertising to today, we've evolved tremendously.

Marketing strategies have become far more complex and immense in scope - even in the past ten years! Why? Because they had to.

Today, we see marketing campaigns that span across multiple platforms and types of media. People consume so much content that it's hard to get people's attention and because there are so many brands fighting for attention, it turns into a shouting match. To quote The Grinch, "that's one thing I hate: all the noise, noise, noise, noise!"

So how did we get here? And how do we rise above all the noise when we truly have something unique to say?

Things change over time. It's not magic. It happens out of necessity.

Below is what's generally accepted as the first ever print advertisement for an automobile. It's from 1898, before radio was mainstream and the world of advertising was quiet. This ad focuses on the benefits: less expensive than caring for a living animal to use for transport, and better than its competition. Also, it doesn't smell! And look, it even has a call-to-action: "send for catalogue!" The Golden Age of Billboards

The 1920's were known as the Golden Age of billboards. They were colorful, creative, and some, like this billboard for the L.E. Waterman Company, were even quite nimble. This one in particular was ready just 48 hours after the armistice was signed in 1919[1]. Take that, Oreo!

But the real reason why ads were starting to evolve wasn't because the war ended. It was because of the growth of our economy. There were suddenly a variety of choices available. Competition forced brands to actually stand for something. There was consistency across different ads for the first time.

This billboard for Camel cigarettes, who in 1921 controlled about half the U.S. cigarette market[2], introduced a new slogan that lasted over a decade. This slogan replaced a slogan which is, in my opinion, far superior: "Camels leave no unpleasant cigaretty aftertaste." So subtle. So clever.

Radio and TV are Invented and Also They Grow Up

National broadcast media ruled the next few decades. For some reason, people loved to just sit around and listen to the radio all night. I wouldn't have been focused enough to follow the story, so I would have hated it.

Radio programming wouldn't have existed without advertising. Television programming wouldn't exist today without it. Marketers now had a captive audience, but for the first time, advertising was truly interruptive. You had to make a compromise: if you wanted to listen to The Green Hornet, you had to be annoyed by ads for Colgate and Alkaseltzer and Vitameatavegamin. Spotify and Pandora do the same thing today if you're too cheap to pay for Premium.

Then TV and the Don Drapers of the world came along. They knew the importance of "why": what sort of man drives a Ford? What sort of woman uses Palmolive dish soap? It wasn't just about what makes your product special. It was how the product made you special. They were selling a state of living.

DON'T BE A PRISONER IN YOUR OWN HOME!

Don't you want a whole new way of life?

They used the same messaging in print, outdoor, radio and television. They were marketing campaigns, not just one-off advertisements.

And they had to do it that way. That was the only way to stand out. That was the only way to be memorable. Because instead of there being two makers of automobiles and two varieties of dish soap, there were five, then ten, and before they knew it, the marketplace was so crowded that no one had any idea what the difference was between any of them. And they were all buying media to get in front of the same audience.

If the world never changed, advertising never would have changed. Advertisers were forced to become more creative as more players checked into the game. There's no "Mean Joe Greene" or "1984" or "Maybe it's My Fault" if "BUY BEN'S COATS" sells, and if there's only two varieties of cigarette, things never would have gotten so complicated. There's no reason to be creative or innovate if you don't have to stand out to be effective.

But you do. And while most of us hate the noise of advertising, when you see a really good ad, one that makes you think and feel and want to see more, you realize how many truly creative people there are out there, making content we should all be proud of.

In 1959, Volkswagen showed us perhaps the greatest example of this in the entire history of advertising. The ads speak for themselves. "He gave advertising permission to surprise, to defy and to engage the consumer without bludgeoning him...not only did everything change, but suddenly things were a lot more interesting."[3] - Bob Garfield, Ad Age

The Birth of Audience Segmentation

We have a lot of choices today. When you drive to work, you can listen to broadcast radio or satellite radio, Spotify or Pandora, or even a podcast you downloaded. It's wild.

We have a million bilion cable channels, and it seems like every television show or documentary ever made is on Netflix.

But it wasn't always that way. In the 1960's and 70's, marketers found more and more creative ways to advertise their products. Popular media exploded: television grew as a medium when Ted Turner launched his superstation in 1976.

People had money to spend (and did!), and the birth and exponential growth of regional and special-interest magazines, in addition to the evolution of cable television, segmented the population like never before. The world had never been hungrier for content that entertained, and marketers took advantage of their access to these audiences. But at the same time, it was becoming harder and harder to get people's attention.

I've talked about a lot of components of marketing campaigns, and even showed how some older advertisements have lots in common with our more inbound and brand-oriented marketing campaigns of today. I choose to risk of skipping over several important decades of ad evolution because I think doing so actually hammers home my point. Today, we all use multiple screens at the same time. As our audiences become more and more segmented, it becomes harder and harder to catch people's attention and the concept of the "marketing campaign" has never been more crucial.

We're exposed to so much messaging (much of it horrendous) that we only remember the truly memorable. Today's campaigns build on all the lessons we've learned over the years.

We're all familiar with the Old Spice brand and the success of their recent campaigns. Keep in mind, they're trying to sell $4 sticks of deodorant and $5 bottles of body soap. But there are so many ways to interact with their brand, in forms of media that didn't exist until very recently, that they stand out from competitors like Degree, Right Guard, and Axe.

I buy Old Spice because of their advertisements. At first it was subconscious, but now I openly admit it. Deodorant is all the same to me, so what sets them apart is their advertising. Wow. Inbound marketing preaches creation of content that helps people. Interacting with consumers and creating meaningful relationships on social media. Offering something of value instead of peppering broadcast media with half-hearted attempts to say, no, MY product is better! Actually meeting your audience in the place where they go to look for information instead of interrupting their lives. Creating brand advocates through contests, giveaways, and featuring user-generated content on your website and on social media.

All of these things are important now more than ever, because today, we have televisions which we watch with computers in our laps and with iPhones in our hands. These glowing screens illuminate our lives and give us access to information like something out of science fiction. We don't have the capacity to take everything in, so we must be selective.

As marketers, we've failed if we see the objective of what we do as selling something. Our role is to connect the right people with the right product or service. Sometimes they don't realize there's a solution to their problem readily available to them. Sometimes it's because the product they're already using is inferior to yours. Sometimes it's because there's something missing in their life, and they want to associate themselves with the way your brand makes them feel.

But no matter what the reason, as marketers, we will be looked over and forgotten if we're not creative, if we don't consider the wants and needs of our customers, and if we don't consider the why: what our brand really stands for and represents. It's time to rise above. When we lose sight of the truth behind all advertising, we're no longer evolved, and things fall apart.

5 Companies That Brilliantly Differentiated Themselves From the Competition, and How You Can, Too