You Don't Own Your Content (And That's Okay) #GreatDebate 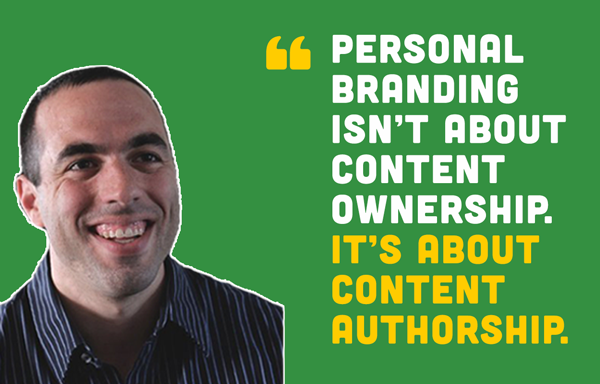 This blog post is part of The #GreatDebate series on content ownership. Learn more about the debate here.

I recently had a writer on my team approach me to ask if I could read over an intro she had written for an upcoming blog post.

"I think I may have gotten too personal," she professed.

"Than it sounds like you're on the right track," I answered. "Are you sure you need me to proof it?"

"Not the point,” I replied. “If you're looking for a human response from our readers, if you’re looking for actual engagement, you need to be human yourself. Again, sounds like you're on the right track."

She nodded in delight. We high-fived. And later, her article was received extremely well by our audience.

This was a microcosm of perhaps the biggest reason our content strategy has been as expansive and successful as it has; our writers approach content not as a chore or tactic, but rather as an opportunity. A privilege. The opportunity to create business, and also, their own personal brand.

However, personal branding is secondary in terms of the opportunity a writer is provided to write for a company in the first place.

Companies own content, period. There’s really no ideology that could even challenge this. And that’s okay. Because the conversation isn’t about ownership. That’s just how business works.

Instead, the debate over content really comes down to authorship.

Companies help to build your authorship credibility, and regardless over who actually owns the rights to your work, this is what helps your brand spread.

For many professional writers, the idea of having a byline or any attribution and control over their work is a pipe dream. They’re paid to produce for the overall benefit of the company, not their “personal brand.”

Authorship, while it may not mean that you own the rights to the content, is having the ability to actually author the content you produce, enabling you to create and nurture a personal brand in the first place. In this regard, companies enable your personal brand to develop.

Ownership is irrelevant in this regard, as your personal branding is really a function of having control over authorship.

The lift and exposure that a publication provides to a writer or reporter is the real opportunity. Without it, personal brands wouldn’t even be possible, or at the very least, would be much harder to attain.

The influx of Twitter followers you receive after a publication? The deluge of blog comments praising – or denouncing – your work? All functions and benefits of owning the authorship of your work.

The company or publication is just as responsible for the growth of a writer’s personal brand as the writer itself, and since, well, they’re the ones paying for the work, ownership isn’t even a discussion.

So what does this mean? Well, for starters it means that using your writing for personal gain – for instance, writing a book containing the company’s work – would require some paperwork. It also means the company can still use your work on behalf of the company should you decide to ever make a career change.

But if you played your cards right, the lift provided by your previous employer helped further your career.

The Lift of Nate Silver

Take statistician Nate Silver, for instance. In November of 2012, a spokesman for the New York Times said that Silver’s FiveThirtyEight blog – licensed and hosted by the Times – accounted for 20% of all website traffic during the presidential election.

While this is certainly reflective of Silver’s innate ability to use data to predict outcomes, a large portion of Silver’s success is also attributed to the fact that his blog was featured on the sixth most visited news site in the United States (the Times had 573 million page views in September of 2012 alone).

Silver presented the right data, at the right time, in the right forum. Success doesn’t function in a vacuum. All three factors contributed to Silver’s blog – and personal brand – tipping.

This presents a curious conflict for writers looking to take their personal brand with them should they ever make a career change, right?

While the writer may have worked hard to create and nurture the company’s voice, the company worked equally as hard to provide you the exposure you needed to prosper as a standalone brand (and perhaps even help further your career.)

Wouldn’t you want this content to stay right where it is? In the case of writers who have access to powerful networks, it’s actually in your best interest to leave the content as is, where it will continue to generate a high volume of attention to the authorship you so rightly earned.

Your personal brand isn’t so much a reflection on the content you own, but rather the quality of the work itself. No one thought any less of Paul McCartney when Michael Jackson owned the rights to his music for all those years, you know why?

Because the music was freakin’ awesome.

So if you’re worried about what happens to your content should you make a change, don’t. Worry more about how you’re going to elicit those tears from your readers. That surprise. That human response.

This is a guest post by John Bonini (@Bonini84), marketing director at IMPACT. Visit the IMPACT Blog for more content from John and the agency.