10 of the World's Best Storytellers [SlideShare]

Since before blogs were created, people have told stories. 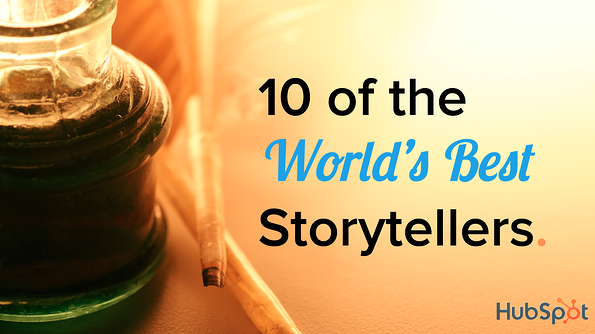 But long predating the clickity-clacking of our keyboards were generations of people finding creative ways to communicate meaning with one another -- to try to bring understanding to a complicated human experience. We painted on cave walls, carved pictures into trees, sorted images out of rocks, sang songs, danced, told stories ... the best of those stories being passed down from generation to generation.

Storytelling is a cornerstone of human existence, and it's what enables successful people to communicate and connect with anyone -- and I mean anyone -- to this day. Whatever your goal, whether to initiate social change, make a sale, or make a friend, the people who are best at it are the ones who can tell a story that makes you sit up, listen, and understand. The best storytellers' messages are heard.

What exactly makes a great storyteller? I set out to reverse-engineer the answer to that question by compiling a list of who many of my colleagues and I agreed were some of the best storytellers in the world. Here's who we found, and what we can learn from them on the art of storytelling.

Whether watching one of his dozens of films or strolling through his beyond-belief theme parks, Walt Disney transcends age groups with his knack for creating a grandiose experience that completely immerses people in his stories. Disney knew how to create an experience by focusing on minute details, and understanding how all those details contributed to the full picture the audience took in. The result? You can leave the real world for a bit and visit, as his buddy Aladdin put it, a whole new world.

Lesson: Use details to create an immersive experience; just take care to ensure those details don't stand out so much that they detract from the story you're trying to tell.

Sheryl Sandberg, COO of Facebook and author of Lean In, uses her platform to address common problems today's men and women face through personal anecdotes. The stories are ones we can all recognize and relate to. By tapping into such deeply personal experiences -- ones we're often surprised to hear about from someone so powerful -- she generates empathy in her listeners and readers, empowering them to reach greater heights.

Lesson: Sharing personal stories makes you feel vulnerable, but it's that vulnerability that resonates with and connects you to other people.

Activist and Nobel Peace Prize recipient Leymah Gbowee's ability to tell an impactful story with not words, but actions, contributed directly to the ending of a 14-year long war in Liberia and the free election of Africa's first female president, Ellen Johnson Sirleaf. She spearheaded peaceful yet remarkable movements to get her message of peace across -- most notably a month-long sex strike for which she mobilized thousands of women -- as well as a daring move in which those women gathered in an open field, wearing stark white shirts brandishing the WIPNET name, to garner media attention for their cause. Among many other remarkable and peaceful acts, she also mobilized the movement's women through pictures on flyers to spread the message, for those women who could not read.

Lesson: You can tell your story without words. Sometimes, the impact is far greater without them.

Richard Branson is one of the richest -- and as a result, one of the most powerful -- men in the world. (With money comes a degree of power, no?) And yet, he's not afraid to open the kimono. Branson never shies away from a conversation, an opportunity to tell stories about the little remarkable moments of his life, and the lives of others. He shares what he thinks, what he does, what he's seen, what he's heard -- and that openness of personality is reflected in his brand. He understands that it's the nuances, even if they're a little less than polished, that make someone or something captivating.

Lesson: Flaws make stories interesting, and more relatable. Don't worry about polishing every little detail of your story -- just tell it. Even the naughty bits. Actually, especially the naughty bits.

charity: water excels at using storytelling to paint a picture of a larger plight -- the dearth of access to clean water in Africa -- through the stories of just one person. Their most impactful medium is video; I recommend watching their video about a young girl named Rachel, for instance. That video alone raised $1.2 million for their cause. That's right. One video. 1.2 million dollars. Nonprofit organizations face the difficult task of telling stories that hit an emotional chord, but don't teeter into guilt for their audience. charity:water manages to tow that line, telling stories that are both heart-wrenching and still uplifting.

Lesson: Sometimes one person's story can help you give a voice to millions.

Great stories have heroes. They have villains. They have conflict. They have happy endings, sad endings, and sometimes, no ending at all. Bruce Springsteen, "The Boss," has for decades painted pictures of the American experience through his music. The stories he tells often stem from other people's stories -- "The River," as just one example, has been said to be inspired by his sister's relationship with her husband. But these deeply personal anecdotes have the power to transport you into that song, as one of his characters living that experience. His songs have recurring characters, specific locations, and intense levels of detail that take you from rock bottom, to flying high. They make listeners feel like their story is part of a communal story, a shared history that makes you feel less alone -- in your misery, hope, or elation.

Lesson: Great storytelling brings together a disparate community through shared experience, making one individual feel part of something bigger.

People often buckets storytellers with creatives, and data geeks with ... well, data geeks. Nate Silver, statistician and writer, is where those worlds intersect. After developing PECOTA, the forecasting system for predicting the success of MLB players, he was able to apply his methods to predicting other things like, you know, the results of the 2008 presidential election in 49 out of 50 states. No biggie. (In 2012, he got all 50 states correct, for the record.) His statistical savvy has led to an entirely new angle on political reporting -- a facts-based approach that, even without a statistical or political background, Silver makes easy to understand through his superb writing and blogging.

Lesson: Numbers can help you tell your story more succinctly, and when dealing with emotionally charged subjects, more objectively, than mere words.

Ellen DeGeneres' storytelling ability comes in her ability to get others to tell their stories -- and make them sound hilarious, no matter how seemingly banal. She has the perfect mix of empathy, humor, and self-deprecation that makes anyone speaking with her feel comfortable enough to open up and share their experiences -- and tell them truthfully, without fear of judgment. Her ability to find the best angles and coach interviewees to those points results in a deluge of uplifting, hilarious, and diverse stories that show everyone really does have something remarkable to share.

Lesson: Whether they know it or not, everyone has a story to tell. If you approach conversations with an open mind, you can find those gems and make them interesting.

Ellen DeGeneres focuses on the bright side of the banal, and Louis CK does the opposite. His stand-up, which is really just on-stage storytelling, taps into the worst parts of ourselves. The gross things we do, the awful things we say, the things we shouldn't think but do ... and then makes you realize everyone has that same storyline running through their heads. By baring the darkest recesses of his, say, bathroom routine, he makes you feel better about your own. Even if you don't have the guts to share it out loud.

No list of great storytellers would be complete without Steve Jobs. As Tell to Win author Peter Guber put it, "Jobs' job is story. He knows his devotees can't just be customers -- he needs apostles for his products who tell his story as their own and move it forward." The best storytellers get others to tell their stories for them. To do that, your stories need to 1) have recall and 2) motivate. If your stories have impact, emotional resonance, and relevancy -- most of which comes out in the details, by the way -- your listeners will do much of your work for you.

Lesson: Create an experience worth telling if you want your story to spread.

Who did we miss? Share your storytelling heroes in the comments.