How the Baader-Meinhof Phenomenon Secretly Influences Your Decisions 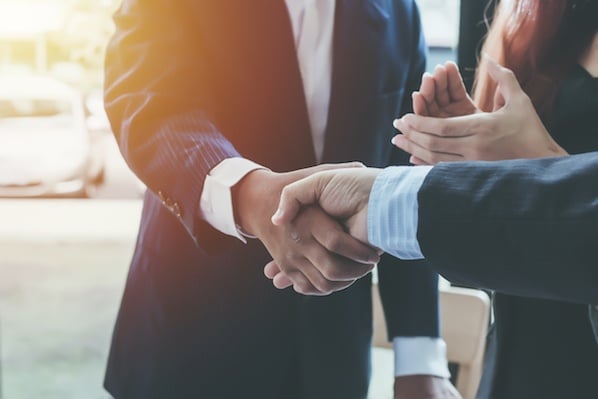 Let's say your friend recently told you about a new Netflix show.

After you heard about the show from her, you began seeing and hearing about it everywhere -- on Facebook, at dinner with your parents, on your favorite radio station.

Kind of creepy, right? It might feel a bit like a conspiracy theory, like the whole world's suddenly playing a prank on you -- but it's not. It's known as the Bader-Meinhof Phenomenon.

Baader-Meinhof Phenomenon (a.k.a. the Recency Bias or Frequency Illusion)

The Baader-Meinhof Phenomenon, otherwise known as the frequency illusion or recency bias, is a situation where something you recently learned about suddenly seems to appear everywhere. There are two reasons for this phenomenon -- first, selective attention, which means your brain is subconsciously seeking out more information on the subject. Second, confirmation bias, which means every time you see something related to the subject, your brain tells you that it's proof the subject has gained popularity overnight.

There are a few ways the Baader-Meinhof phenomenon might influence your customer's decision-making process, and understanding the psychology behind it is key to taking your marketing strategies to the next level. Let's take a look at three ways in particular now.

1. The Baader-Meinhof Phenomenon and Repetitive Marketing

To incorporate the effects of the Baader-Meinhof Phenomenon into your marketing strategy, you need to put your brand messaging out there as much as possible.

Remember, the Baader-Meinhof Phenomenon can only happen if someone initially notices or learns about your product. You'll want to start with strong ad copy, an attention-grabbing headline, and memorable images to attract your audience and introduce them to your company.

Now that their brains are selectively paying attention, you'll want to spread your messaging to various platforms, including social media, radio stations, TV, billboards. You'll want to choose platforms that align with your brand and customer base -- the point is, you want to repeatedly appear on these platforms so your customers can notice you.

Ideally, this will become a self sustaining long-term strategy. Even if your customer isn't in the market for your product now, they've seen your company everywhere. Next time their friend is looking for a product like yours, your potential customer will mention you first.

The Social Proof Theory, first coined by psychologist Robert Cialdini, states that someone who doesn't know how to act or think will imitate other people, or turn to peers for guidance.

In marketing, social proof is an extremely effective method for persuading customers to buy a product. Customer reviews, testimonials, and statements like "four out of five parents recommend" are critical for convincing hestitant buyers to choose one product over another.

Suddenly, you hear your coworkers talking about it. Then, you see a post on Instagram, with one of your favorite celebrities endorsing the product.

It's likely people were talking about the FitBit Charge 2 before you heard about it, but once you did, your brain paid more attention to it. You took note of all those people raving about the product, and meanwhile, your brain chose not to pick up on that other conversation about the new Samsung Galaxy Gear Fit.

In other words, you selectively listened to people discussing the FitBit product because you'd recently learned about it, and then social proof led you to believe it was the best, and perhaps only, fitness tracker option.

As you can see, these two psychological phenomenons work together to convince someone to buy one product in particular.

To get the most out of the Baader-Meinhof Phenomenon, you'll want to use it hand-in-hand with The Social Proof Theory. Include reviews and testimonials on your website, as well as third-party sites like Yelp, so once your customer learns about your product, she will be subsequently convinced through social proof to buy it.

3. The Baader-Meinhof Phenomenon and Confirmation Bias

Let's consider the second reason for a minute. Confirmation bias is actually a phenomenal tactic to convince customers to buy from your company over your competitors. Essentially, confirmation bias means someone looks for evidence to confirm what they already believe, even when that evidence is largely neutral.

For instance, let's say you read that right-handed people are better at math. You believe it, and whenever you meet someone who's right-handed and good at math, you file that information away as evidence you're correct. You're insistent on maintaining your prior beliefs. You look for evidences that supports it, and you ignore evidence that contradicts it -- like your left-handed friend who is incredible at math.

What does this have to do with marketing? A lot.

Easier said than done though, right?

To learn how to use confirmation bias to your marketing advantage, let's take a look at an example from the 1990's, when Schlitz, a failing beer company, hired Claude Hopkins, a legendary man in advertising at the time.

Hopkins asked Schlitz to give him a tour of their brewery. On the tour, he saw plate-glass rooms with beer dripping over pipes, expensive wood filters that took out impurities in the beer, and rooms filled with filtered air. The pumps and pipes were cleaned twice a day to avoid contamination.

Seeing the impressive process in action, Hopkins asked Schlitz why they didn't advertise it to people to prove their beer was better.

The Schlitz people told him, "All companies brew beer the same way."

"Yes," Hopkins replied, "But the first one to tell the public about this process will gain a big advantage."

Within six months of Hopkins' advertising campaign for Schlitz, Schlitz beer became the number one selling beer in America. Why? Because people were given evidence to believe Schlitz was purer. Once they were embedded with a confirmation bias for Schlitz, they probably tasted the beer and thought, "Yes, this is more pure." They also avoided other beer companies' advertisements to the contrary.

By figuring out what makes your product unique and telling potential customers, you're creating a confirmation bias that your product is exceptional. As people seek out evidence to support their belief, the Baader-Meinhof Phenomenon asserts they'll begin seeing your product everywhere.

It's not easy, but if you can create a compelling campaign to capture an audience's attention and show them why your product is better than others, the Baader-Meinhof Phenomenon and confirmation bias can do the rest.