Before & After: How to Fix These 7 Horrible Headlines 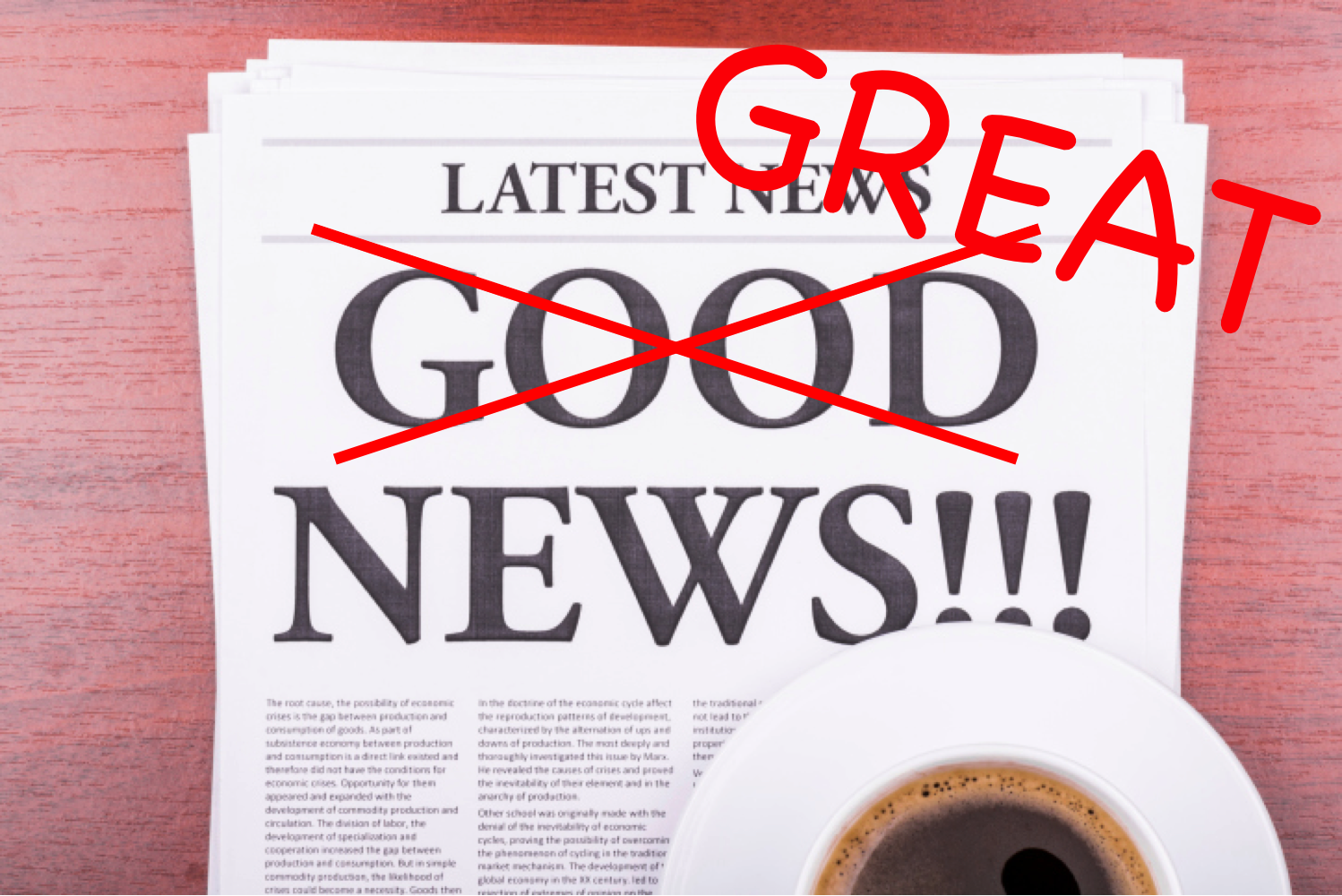 Crafting headlines is the hardest part of the entire writing process. You've got to be descriptive, yet concise. Attention-grabbing, yet factual. Seach-engine friendly, yet catchy. Oh, and alliteration works well. And you've probably overused the word "awesome" or "amazing" -- so find something better than that. To top it all off, it should also fit in under 140 characters so it's easy to tweet. 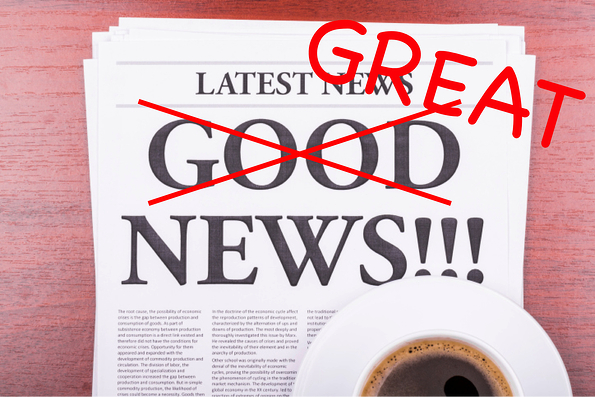 Yup, that's hard. It's so hard that my teammates and I on HubSpot's blogging team never publish a post without brainstorming a headline with each other first. And even then, we might not get it right.

So when I see a horrible, terrible, no-good headline published, I feel for the author or editor who labored over publishing it ... but that doesn't mean we can't learn from their mistakes to make our own headlines better.

To make this a learning experience -- not a finger-pointing-fest -- I compiled seven pretty bad headlines into the post below. We'll dissect them and figure out why they're ill-advised, and then make mental notes to avoid them in our own writing.

That was the headline I clicked on when I landed on the BuzzFeed homepage. I'm a huge scaredy-cat, so I was excited to see what other common fears people secretly shared based on the headline. I landed in the post and immediately started scrolling -- I want to have my fears validated! This is what I see: 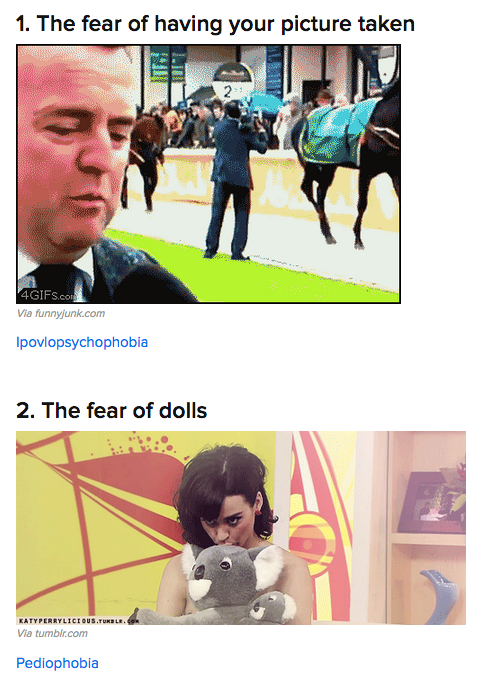 And then they kept getting weirder and weirder. The fear of being left handed. The fear of beards. The fear of chins. What the heck? I thought these were supposed to be "fears that everyone has" -- that's what the headline promised me would be here.

Annoyed, I scroll up and confront the headline on the article page: "12 Things You Won’t Believe People Are Afraid Of." That's completely different than what I was promised.

In your own titles, don't pull the headline bait-and-switch -- even if it's unintentional. I like to ask myself one question before publishing: "Is that really what the article is about?" If yes, I hit publish. If not, I go back to the headline drawing board.

When I first saw this title, I laughed out loud -- and that's not because Ryan Seacrest will be hosting a new game show where kids will be competing to win prizes by watching viral videos. Nor is it the fact that the phrase "go viral" is in the headline.

When you're writing titles, be 100% sure what you're saying actually means what you're saying. Certain words and phrases mean certain things in certain contexts. If you really need a gut check, IM or email a coworker with the title and zero context and ask them what their thoughts are. Better safe than sorry.

3) "MagicMomentsProm.com Advises Teens to Look to Celebrities for the Perfect Prom Dress Styles and Where to Turn for a More Affordable Choice"

One of the best grammar lessons I learned was about parallel structure. Basically, if you're going to have two phrases in a sentence, they should follow the same structure. It's mostly about having the same verb tense, but you can get fancier by aligning other elements of the phrase. When you break the parallel structure rule, compound sentences end up sounding awkward ... like really awkward.

Take the above title from a press release, for example. Read it one time and tell me what the article is going to be about. Teens should take celebrity advice for prom dress styles? Teens should find someone to help them find a cheap prom dress? It's super confusing because the article is supposed to address both.

Here's how I'd rewrite the title to get that dual message across: "MagicMomentsProm.com Advises Teens To Look To Celebrities For The Perfect (and Affordable) Prom Dress Styles." Much clearer, right?

You've heard this lesson for your entire life, and you'll hear it again in this blog post: Grammar is important. It's not the be-all-end-all of content creation, but it should be used to help clarify your message, not muddle it.

I'm going to let you try this one on your own. The header above was the headline I saw, and here's the context in which I saw it in the sidebar of The Huffington Post: 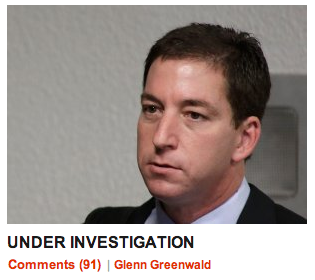 What the heck is that post about? Who is under investigation? And what for? Glenn Greenwald? Maybe it's just me being ignorant of what's happening in the world, but I don't even recognize who the man in the picture is.

Here's what the title is once I click through: UK Pursuing Criminal Investigation Into Guardian Leaks. OH. Now that makes sense!

Lesson for us: Never sacrifice the meaning of your headline for being concise. I had no clue what that post was about and I definitely wouldn't have clicked through unless I was writing this blog post about confusing titles. Don't assume that your readers will just get it -- I'd bet that 9/10 times, they're going to keep scrolling.

This title from TechCrunch isn't one of the worst I've ever seen -- it's pretty straightforward and clickable. But it does have one pretty giant weak spot.

Check out that descriptive phrase right smack dab in the middle of the headline: "Viewed 22B Times a Day on 7.5M Websites." Yep, those numbers are impressive ... but they're describing Facebook, the biggest social network of our age. We don't really need a qualifier to understand how gargantuan Facebook is -- so cut it from your headline.

If you're adding data, adjectives, or any clarifier to your titles that don't really need to be there, cut it out. Since you have limited space in your title for it to appear in search and social networks, use it wisely.

Is this a spam post randomly compiling words together like the "What would I say app?" that's been taking the internet by storm? And who the heck is John Mariani? This article is on Bloomberg -- shouldn't it be good? I was just really confused when I saw this.

The main problem with this headline is that it comes across as quite randomly put together, and name drops someone who isn't recognizable to someone who's a big wine fan (cough me cough). Instead, Bloomberg should remove Mariani's name from the title, and try to position the California Pinots as the underdog so that "beating blockbusters" makes sense -- and makes you want to click.

It also confuses a reader by having two recognizable names -- "pinots" and "blockbusters" -- close to one another but with no discernible relation. Are Pinots and Blockbusters in a fight? Why is wine fighting with an old video rental chain? The problem is compounded because "beat" can be used as both a noun and a verb. Are the pinots beating up the video store? Or are "Beat Blockbusters" a thing I should know about that lie on a spectrum which runs the gamut from "California Pinots" to "Beat Blockbusters"?

If i was going to redo this title, I'd probably nix the word "blockbusters" entirely, as it takes the mind to another place that the article doesn't intend you to go. (And it's not the right place.)

And of course, we couldn’t end this post without adding one of our own titles into the mix. Like I said before, it happens to all of us. So here’s a title of a recent post that flopped.

It’s confusing … right? It seems like we were telling you to NOT use these productivity tools and techniques because they make you waste time, but in fact, we really wanted you to use them to save time. The reason it’s confusing is the word choice, “with.” Once we realized our mistake, we switched up the phrasing to say, “Productivity Tools and Techniques to Stop Wasting Away Your Workday.” Clearer, right?

The lesson: Really think about your word placement -- something as simple as switching the phrases in a headline can add clarity, or mystery, to your headline. If you're straightforward yet compelling, you're going to be set for any headline you write. Think about what you've said in the post (yup, I'm recommending writing your title after you write your post) -- and think about how you'd get your buyer persona to read the article in five seconds or less.

What terrible headlines have you seen, and how would you fix them? Share them with us in the comments.