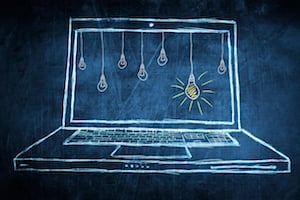 You've probably heard many times before that if you want to create and sustain a successful blog, there's a lot you need to do. You've got to create exceptional content. You've got to optimize your posts for search engines. You also have to create catchy titles, inspire social shares, and determine the best times for publishing your posts, among a thousand other things.

Actually putting all of those best practices into, well ... practice ... can feel daunting. What exactly makes a title attractive? When are the best times to post? How often should you be posting? How can you inspire social shares?

Recently, we came across TrackMaven's recent Colossal Content Marketing Report because our VP of Content is an advisor. In the report, they analyzed 4,618 blogs, 1.2 million blog posts, and almost 2 billion social shares. The result: some very telling statistics that can help answer the questions above and give you insights into how you should optimize your own blog. Check out some of the highlights from the report below.

1) Of the 1.2 million blog posts analyzed, 87% were published during the workweek. (Tweet this stat)

2) Tuesday and Wednesday are the most popular days for publishing blog posts.  (Tweet this stat)

3) The 13% of blog posts published on the weekend collected the most social shares. (Tweet this stat)

4) While only 6.3% of the blog posts analyzed were published on Saturdays, they received 18% of the total social shares. (Tweet this stat)

6) Posting frequency steadily declines throughout the day, but then spikes again at 12 a.m. - 1 a.m. EST, with 3.17% of posts published at that time. (Tweet this stat)

7) The standard for title length is 40 characters. (Tweet this stat)

9) Titles that included a single question mark have 46.30% social shares, nearly double that for titles without question marks. (Tweet this stat)

10) The peak for social shares correlates with standard title capitalization. (Tweet this stat)

11) Virality is achieved only by a small minority of blog posts. (Tweet this stat)

Which of these stats was most surprising to you?

10 Sites You Can Use for Free Blog Promotion

Business Blog: Why You'll Kick Yourself Later For Not Starting One Now

Technorati is a system used to track, rank, and search the blogosphere which now includes 57 million blogs.  They recently came out with a state of the union post on the blogosphere itself which is a pretty interesting read, albeit a little...