In a world where 40% of people respond better to visual information than plain text, it's probably a good idea to optimize your social media channels with visuals. And one of easiest ways to take advantage of visual content on social media is through your cover photos -- sitting right at the top of your profile, they occupy a huge piece of very valuable real estate. 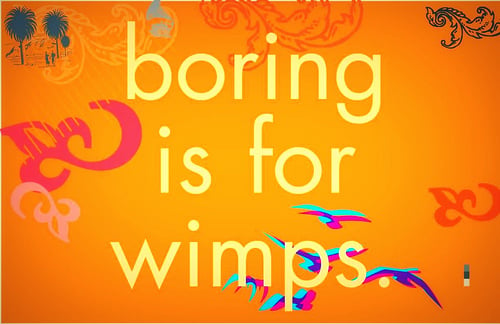 And right about now, I know what you're thinking. Yes, visual content is important ... but what about those companies in "boring" industries? Can they really create make the most of this hot visual real estate?

And the answer is yes. Check out the 25 brands below to see how even "boring" companies can create engaging social media cover photos on five of the most popular social networks.

We're digging the scientific measurement technology company's out-of-the-box thinking here. According to the cover photo's description, each block of the image's design represents a different aspect of its business. You probably have something in your business that could translate well to visuals -- find it and use it.

This Cover Photo is awesome because of the way it positioned its design elements. We love how Maersk Line right-aligned the elements of its cover photo -- it's a much more effective use of space than if the ship and text were aligned to the left of the image.

Facebook used to have a 20% rule in place -- only 20% of your cover photo image could be text. But we're glad that it did away with that rule, because of cover photos like Cvent. Using icons and some text, Cvent gives you a concise description of who the company is so you can decide if you want to Like its Facebook Page ... or not.

Need a cool idea to promote an event in your Facebook cover photo? Look no further than Salesforce's cover photo. We love how sophisticated this cover photo looks with the speaker headshots and geometric shapes -- but how easy it could be to replicate with resources that almost any marketer has at his or her disposal.

Bonus: The cover photo description has a shortened (and trackable) link so Salesforce can track how many people clicked on the link within the description.

Besides having a somewhat veiled Ghostbuster's reference, this facilities-management company's cover photo is great because of the way that it integrates the design of the photo and text. Notice how the text is right-aligned in the overall design of the cover photo, and how the all-caps bold lettering allows it to stand out from somewhat confusing colors in the background.

Okay, we're a little biased -- we think SEO is awesome and interesting -- but lots of non-marketers have no idea what SEO is, never mind actually care about it. So that's not the only reason we included this Twitter profile header on this list. We love how Organik SEO merges its header photo and profile picture into one big image. It's a great way to have one cohesive design on a social platform where it's easy to distract users with random profile pictures, header images, background images, etc. 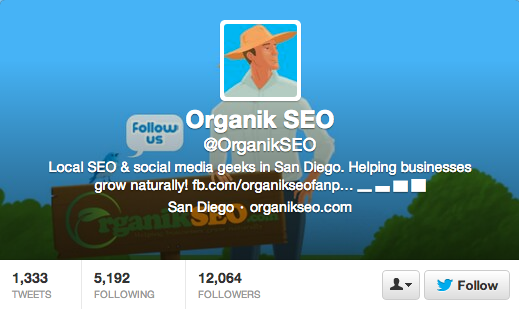 Software can be really hard to showcase through visual content -- but PGi's header image shows how you can still incorporate product images into visual content. The cover photo is much more than a product screen shot. It's much more visually pleasing to have the software featured in a photo with a real human using it. I also love how PGi darkened the cover photo so that the white text pops from the white image background. 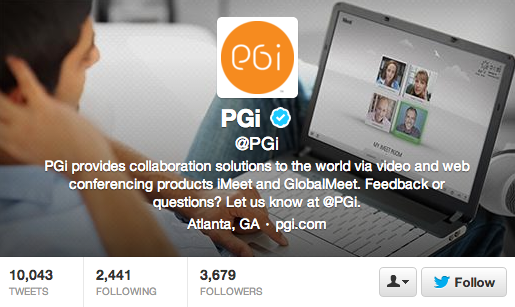 Sometimes, you don't even need a photo of your product or company at all -- you can use a photo that encapsulates your brand's message to communicate that message for you. VMware did just this in its Twitter cover photo. A building surrounded by a big blue sky isn't what VMware sells, but it does make you think that VMware is an innovative software company.

With more and more companies going digital, companies that produce paper products have a tough road ahead ... but that doesn't mean they can't produce engaging, digital, and visual content. Neenah Paper does just that with its header image by adding small design details to communicate what the product is. I love how the lines on the Post-It note resemble the inside of a tree -- which further drives home the point that Neenah Paper makes high-quality paper products. 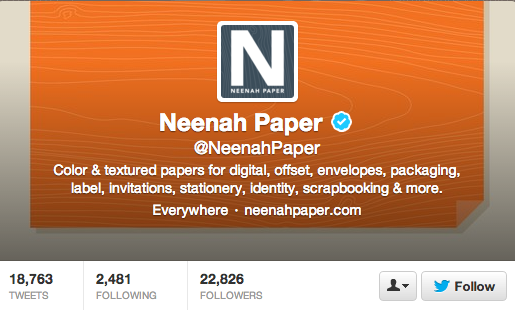 Like VMware, BearingPoint includes a symbolic photo about its company as its header photo -- with a twist. In the top left corner, BearingPoint includes its logo in a shape that matches the rest of its digital branding. It's kind of a meta-branding move, but we think it's a great way to showcase cohesive design elements across platforms. 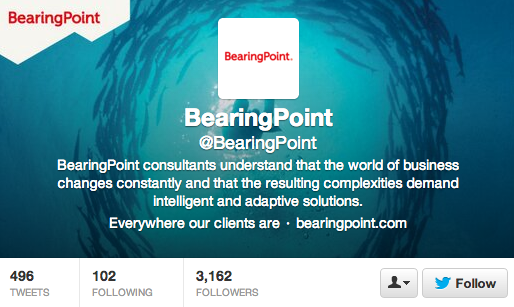 In this snowplow company's LinkedIn cover photo, I love how the image and text pairing scream that BOSS Snowplows are tough. The all-caps letters with the highlighted words "BOSS COUNTRY" on a stark white background all make this cover photo one of my favorites. These design elements all help communicate the company's brand: a tough, hearty machine that gets the job done. 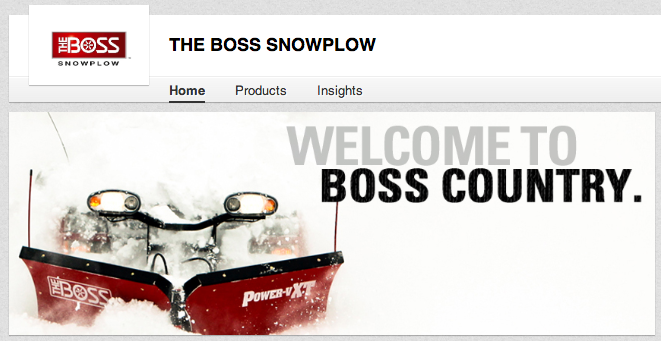 For an oil company with some crises in its past, it's even more important for the company to maintain a human brand image. Politics aside, Chevron does have an engaging LinkedIn cover photo featuring portraits of its community members. We think this is smart to have in a LinkedIn cover photo because the people Chevron will try to recruit through LinkedIn will get a better idea of Chevron's company culture and priorities right off the bat with this visual. 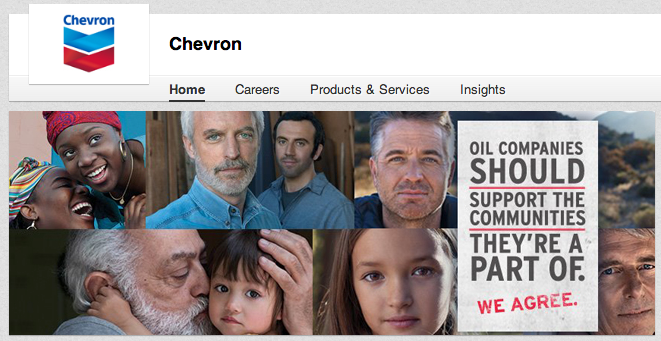 Magna Powertrain speaks to the interests of its audience (people who love the inner-workings of vehicles) with the visuals in its cover photo. People who love car parts probably want to look at renderings of them -- not just pretty pictures of cars. Know what your audience likes -- and cater to that -- even if it's not what the "average" person likes.

This is another example of a company using abstract visuals to communicate messages about its brand. While the visual is definitely inspiring and engaging, I love how Accenture explains its business in the top right corner. People don't need jargon about what your technology does ... they want some quick-hitting explanations of the business. 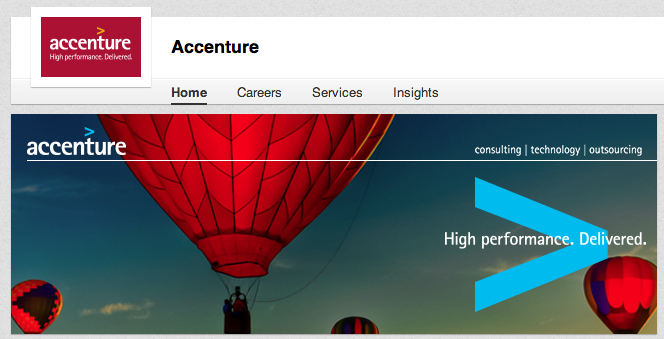 Insurance is something that most of us want to set and forget about -- it's something we deal with when bad things happen in life. To help alleviate some of the anxiety that comes with dealing with insurance companies, Allstate uses calming blue colors and cartoon images.

Just something we should all think about -- what kind of mental state will people be in when interacting with our company? And how can we make that experience better? 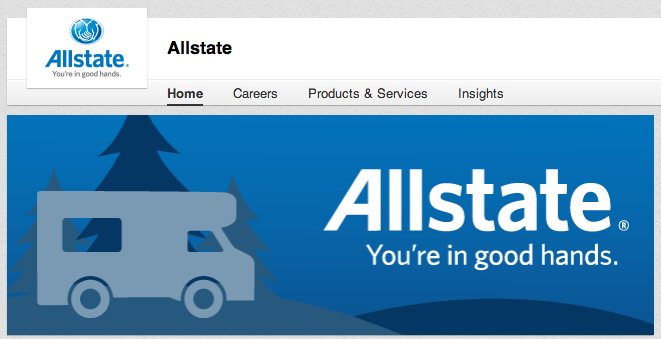 When you go to Cisco's YouTube page, you can't help but stare at its cover photo -- and that's what you want when people come to your YouTube page, as well. Bonus for this image: it looks like a stock photo you could easily customize with text. Cisco uses this real estate to feature key URLs and hashtags to connect its cross-platform campaign.

Again, here's a company that uses cartoonish images to convey a very abstract concept about the company, while also making it seem much more approachable and friendly. Oracle's use of red -- while on-brand -- also makes the "Subscribe" button pop, which is the goal of most YouTube pages.

For one of the top financial companies in the world, it's important from a branding and recruiting standpoint to get human faces in your visuals. Deloitte did just that in its YouTube cover -- and it's working. I especially love how the Facebook, Twitter, and Google+ buttons appear right in the cover photo. It helps connect your audience with you across multiple channels and drives home the point that Deloitte has real people working for it. So go ahead -- make sure your entire YouTube bio is filled out!

We've mentioned this before and we'll mention it again -- your 'boring' product can often be a part of a much more sexy product. Here, EMC is featuring a picture of a Lotus car part that their company helped produce. It's much more engaging than a screenshot of a piece of software. Try to think out of the box for your company, too.

Here is another very accessible design from an "unsexy" business. Using geometric and colored shapes, Kinaxis shows off its data-driven personality. The best part is, you could easily recreate it in PowerPoint.

When you first see IdeaPaint's cover photo, you aren't too impressed -- it's people, sitting at a conference table. Cool. But if you scroll up, you get a surprise: The entire conference room is filled with people writing on whiteboards. We love how IdeaPaint used Google+'s technology constraints to delight its Google+ visitors.

Like other companies with heavy machinery, Caterpillar features real people in its cover photo on Google+. We like the balance of real people and really big, impressive machinery -- the two most important things to Caterpillar Inc's buyer personas.

Taking a photo of a computer processor isn't super engaging ... but what about a design that looks like one? We love Intel's design not only because of its geometric shapes and bright colors -- but also because it reminds us of the product itself. Definitely a hard feat to accomplish for Intel and its products.

Like Caterpillar, Media Temple features photos of real people ... but instead of being one static, non-scrollable image, you uncover more photos as you scroll up. The collage of images is a great way to make Media Temple -- a web hosting company -- feel more human to its Google+ followers.

The best cover photos on Google+ are those that look great in their automatic small form, but that also look great once users scroll up to reveal a larger photo. SAP's cover photo is both visually appealing in the small form and informative in its larger form -- which solves for the visual and textual needs of Intel's Google+ followers.

Which of these cover photos is most inspirational for your business? If you're ready to amp up your social media cover photos, download our free template as part of our visual content crash course.

Make a great first impression with a quality cover image for your Facebook Page.