Almost Famous: The Business of Being a Celebrity Impersonator

It was dark. To my left was Captain Jack Sparrow. To my right was the Wicked Witch of the West. Then, Marilyn Monroe appeared on stage.

That's all par for the course at The Sunburst Convention, an annual conference in Orlando, Florida for professional celebrity impersonators and lookalikes. Since 2003, people have attended this conference to make connections with fellow performers, book gigs, and hone their craft.

For three days, some of the most talented impersonators in show biz welcomed me as one of their own and taught me what it takes to make it in this fascinating industry. Here's what I learned.

The Different Types of Celebrity Impersonators

When you think of celebrity impersonators, you probably think they all have to look, walk, act, and talk just like the person they're emulating. Turns out, if you want to appear as a celebrity, you have several different options:

Tribute artists: These folks may not necessarily look or sound like the person they're impersonating, but their performance is an homage to a celebrity or time period. Think 80s cover bands, for example. 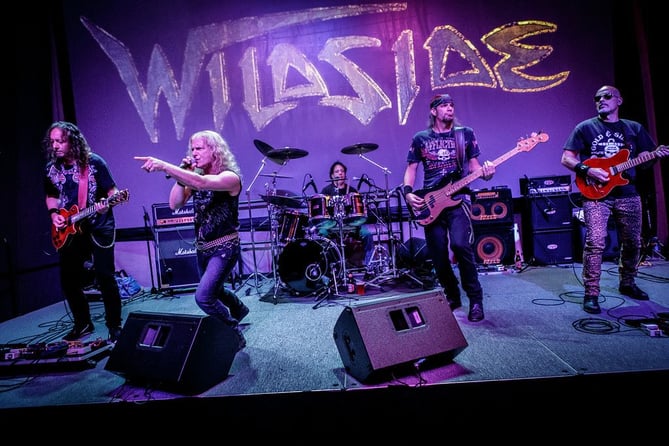 Lookalikes: These actors are the spitting image of a celebrity -- but they may not sound or act like them. They typically book gigs that only require photo ops. 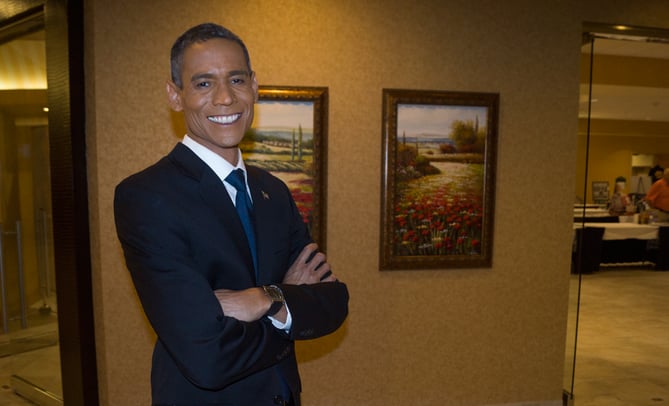 Celebrity impersonators: These people do the whole shebang -- they walk, talk, act, and look just like a particular celebrity. When in costume, they're entirely in character. 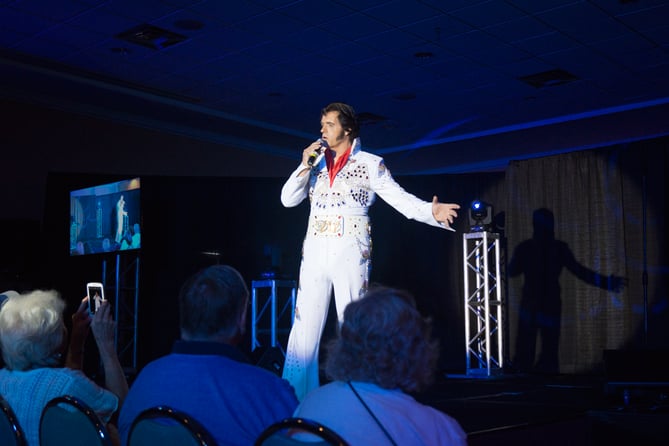 But no matter which type of performer you are, if you're doing a tribute to a celebrity, you are doing it out of respect for that person -- you wouldn't accept gigs that make fun of your character. Greg says, "If you’re impersonating someone, you’re paying respect to them. You’re not going to go take pictures in the bathroom to make fun of them."

This caring, respectful attitude combined with incredible attention to detail and raw talent is what helps performers get into the biz -- and stay there for a long time.

Getting Into the Celebrity Impersonator Biz

Every impersonator I met had a fascinating story about how they got into the industry.

Her whole adult life, Carol Woodle was told how much she looked like Oprah Winfrey -- but she didn't do anything about it until a tragic turn of events left her and her three kids homeless. As a last-ditch effort to pull her family out of poverty, Carol entered an Oprah lookalike competition. She came in second place.

Since then her career has taken off, so much so that she was able to put her kids through college. She flies all over the world to impersonate Oprah and inspire crowds of raving fans -- the latter being her biggest motivation. "If I can change one person's life by telling them to stay in school, this career is worth it," she told me. 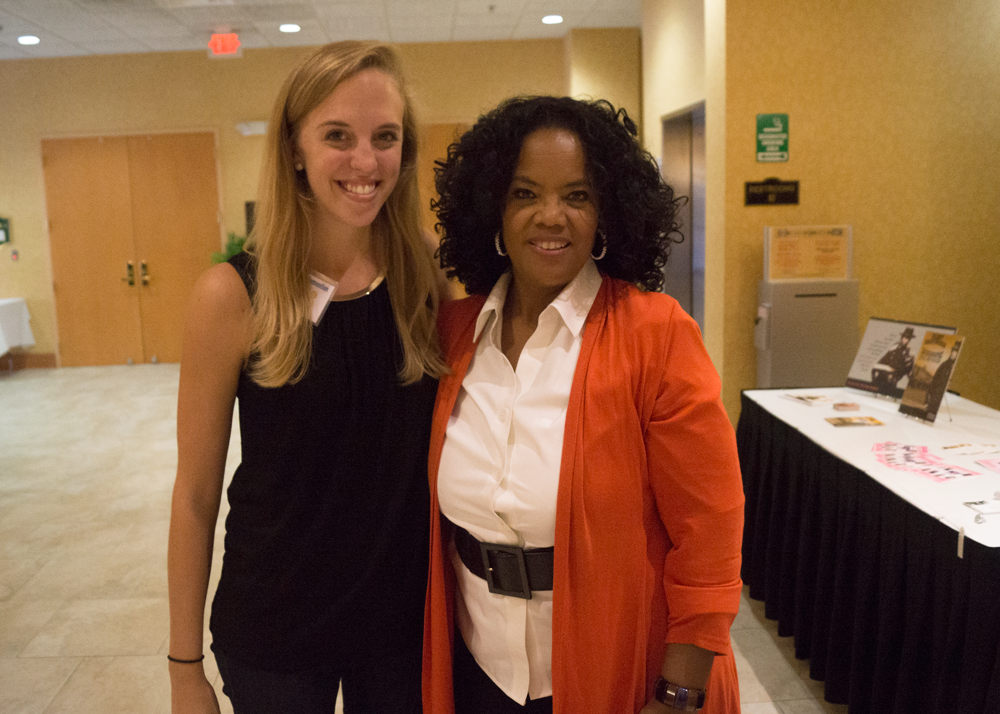 And unlike Hollywood, where the successful tend to skew very young, artists can make it big at any age. I spoke with Angelo Capone, a 61-year-old Sunburst Convention attendee who is trying to break into the industry. Though he had been dressing up as Jerry Lewis for friends and family for years -- Angelo is dyslexic, and doing impressions of Jerry Lewis' characters helped him excel in school and make friends -- he didn't look into making this a career until after he retired. 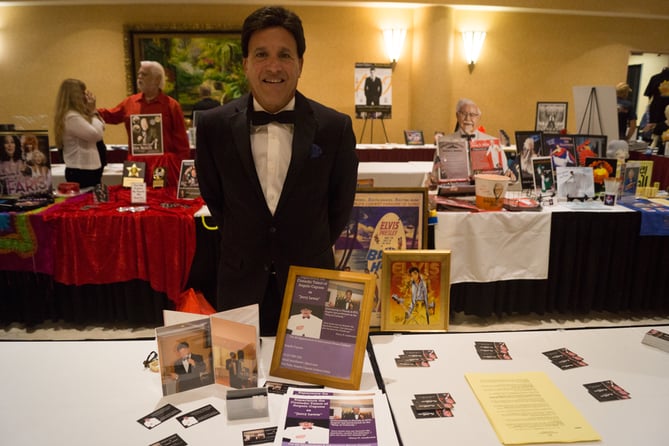 Celebrity impersonators are paid anywhere from a few hundred dollars to thousands of dollars per performance -- it all depends on how famous their character is and what kind of job they're doing. They can be hired for grand openings, corporate events, birthday parties, and even as characters in the Disney and Universal parks in Orlando. One Johnny Depp/Captain Jack Sparrow impersonator who previously attended The Sunburst Convention, Ronnie Rodriguez, was even hired to be a double for the real Johnny Depp in two of the Pirates of the Caribbean movies.

Sometimes, brands will even hire impersonators to be official brand ambassadors. Colonel Johnny D. Miller, for example, is one of two official Colonel Sanders in the world. He appears in commercials and at KFC-sponsored events all over the globe. 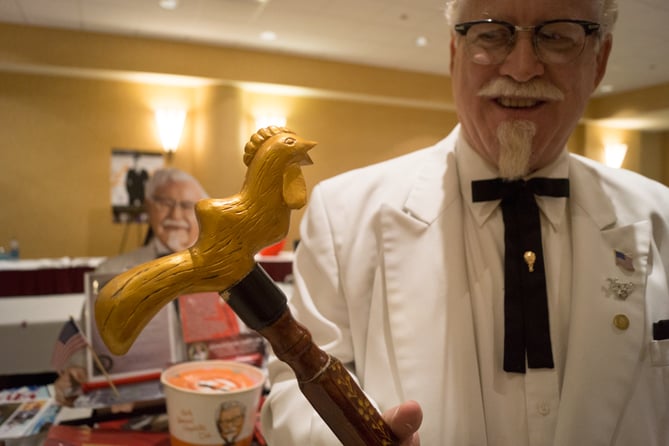 To increase the odds of getting hired and create a steadier flow of clients and income, many performers take on multiple characters. Take actor Rob Iberg, for example. On my first night in Orlando, I spotted him from across the room playing one of my favorite characters of all time: Ace Ventura. 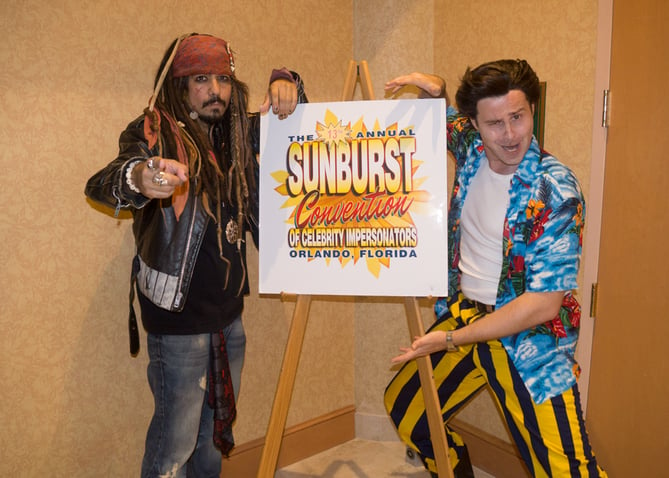 When we got to chatting, I learned that Ace was just one of the characters he had up his sleeve. Rob is also well known for playing Johnny Depp/Captain Jack Sparrow, Doc Brown from Back to the Future, and even Ron Burgundy. 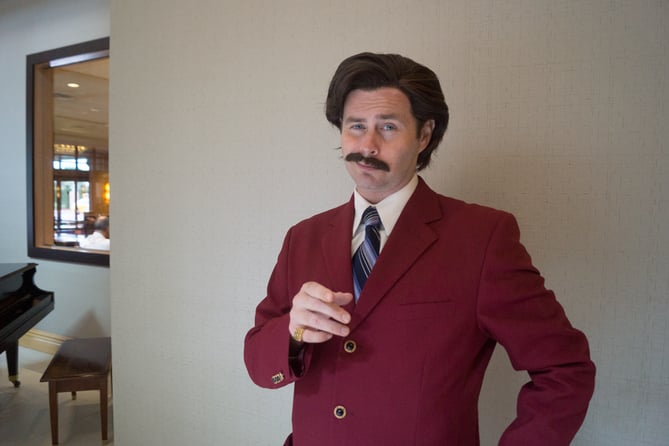 For each celebrity he impersonates, Rob does a ton of research and preparation to get it just right. He's not about doing any character just to land a gig: "I don’t want to do it unless I think it’s going to look right," he said.

And to make it look "right," Rob needs to nail the little things -- the embellishments on his outfit, the pitch and inflection of his voice, even the small mannerisms and movement that the celebrity probably doesn't even realize they're doing themselves. He'll spend weeks hunting down the right wig, watching interviews and clips of the celebrity to analyze their mannerisms, and perfecting his accent to be indistinguishable from the character.

As you can imagine, getting every little detail right requires lots of time, money, and effort, so Rob doesn't like taking a chance on characters that won't work out. For example, though Rob looks eerily like Johnny Depp, he won't impersonate every single one of Depp's characters -- if one of Depp's movies doesn't take off, the thousands of dollars and hundreds of hours invested into becoming that character doesn't pay off. And for Rob -- and any other performer -- to make it big, he needs to find characters that can book him many gigs for relatively low cost and/or high return.

After performers choose their act, build their costume, and nail their character's mannerisms, they still have a way to go before hitting the big time. Sometimes they'll have an agent to help field requests and manage their schedule, but often, they're doing a lot of their act's promotion on their own.

Many of them turn to the web. It's cheap and very visual, making it easy for them to quickly show what their act looks like. Almost all have their own website and custom domain name (ex: http://presidentobamaimpersonator.com), but many build followings and connections on Facebook and Instagram, too.

In fact, their brand-building efforts can actually get a little more complicated than the average brand's, especially if they're one of the actor-types interested in doing several characters. They need to build multiple social media profiles on one network -- one for their actor brand and another for each of their characters. So to keep up a robust social media strategy, they need to constantly be maintaining several profiles at once.

That's turned out to be a blessing and a curse. While character-focused social profiles may generate more interactions (people will naturally gravitate toward characters they recognize and like), they can actually get more engagement than the actor's individual profile. For example, Rob told me that some of his characters' Facebook Pages have more Likes than his own. He rolls with it, mixing character-related content with self-promotional posts on these character-specific profiles -- it helps drum up more engagement for his business over time.

Performers also use social media to connect with each other. Over 700 Sunburst Convention attendees hung out together in a Facebook group, posting words of encouragement to those who were performing alongside funny videos and photos from the week. Lurking in the group, I felt like I was watching a big family reunion take place -- a vibe that doesn't disappear when you get to the conference. I personally got to witness a completely improvised interview between Ron Burgundy (Rob Iberg) and Captain Jack Sparrow (Matt Kay), which then got published on Matt's Facebook page. At publish time, the video had nearly 50 Likes and 30 comments -- many from other Sunburst attendees. 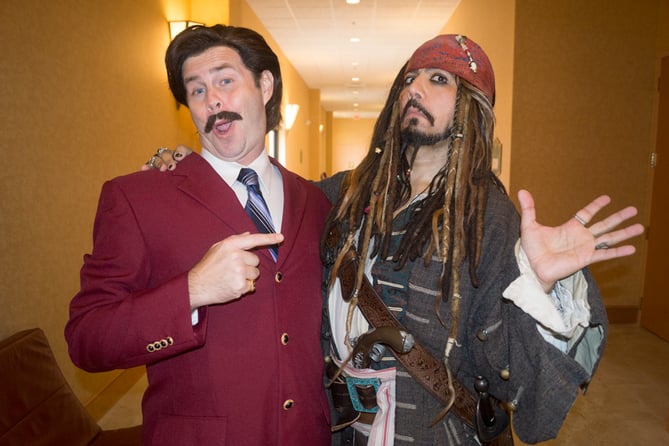 At Sunburst, performers also put together booths with props, pictures of themselves as their characters, and informational one-sheeters. People will walk around to each table to chat with the performers and potentially book gigs with them. 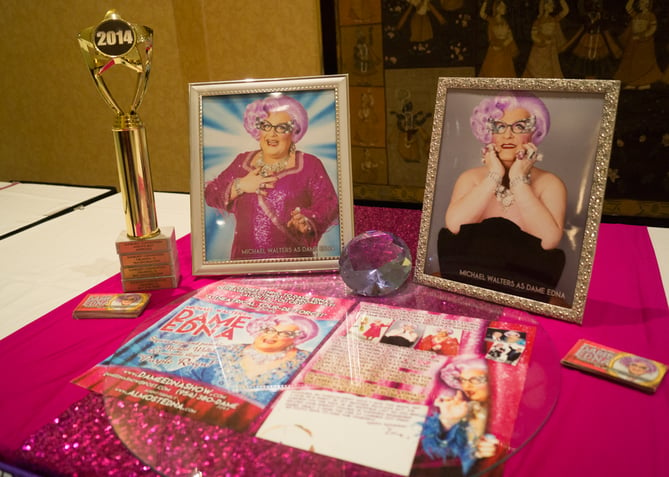 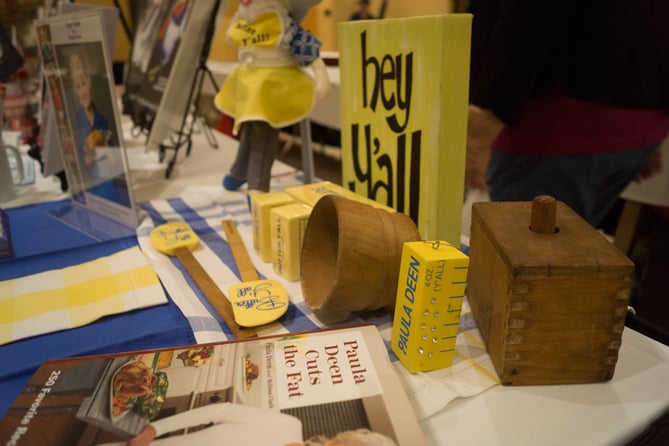 All of these different tactics help secure gigs in a very competitive industry. Think about it: With hundreds of Marilyns to choose from, how do you make yourself stand out?

Though most of the performers I met spend lots of time, money, and effort developing their character and promoting themselves, some "Party City impersonators" will go buy a cheap costume and book gigs for incredibly low prices. This puts impersonators in a tough spot. They can't exactly cry "copyright infringement" when someone tries to rip off their act for a lower price. All they can do is work to become as close to the person they're emulating as possible.

Sometimes, that can backfire.

Turns out, not everyone's a huge fan of being impersonated -- especially a celebrity's lawyers. Mike Walter, a Don Rickles impersonator, told me about a time he met the famous comedian. Don said Mike was a "damn good looking guy" and even gave Mike verbal permission to do a tribute of him ... but Don's lawyers still made sure Mike put a disclaimer on his website and Facebook Page that says he's not endorsed by Don in any way, shape, or form.

The impersonators who can navigate the murky legal issues and competitive landscape can have a long and successful career. But I couldn't help but wonder: When you're constantly pretending to be someone else, how do you draw the line between a celebrity's life and your own?

The Real Lives of Celebrity Impersonators

Most of the performers I talked to said sharing similarities with their chosen celebrity made it easier for them to separate their personal and professional lives.

Take Carol, for instance. She and Oprah come from similar backgrounds, and they're both passionate about making a difference in others' lives. So even when Carol is in character, she's partially herself, too.

The skills and confidence developed to be a celebrity impersonator can also help improve performers' personal lives. Remember Angelo, the Jerry Lewis impersonator? Impersonating Jerry helped him work around his disability and have a stronger social life.

Today, Angelo says impersonating Jerry is just part of his personality. "This is who I am," he said. "I'm here at Sunburst to expand on the person that I am."

He's not too worried about the personal and professional overlap. His philosophy? "You have to look for whatever works. It’s the sign to keep going." After seeing a crowd doubled over in laughter from watching Angelo perform, I'd say it's working, too.

Want to learn more about the lives of professional celebrity impersonators? Check out the documentary Just About Famous, featuring many of the folks I chatted with for this piece.