Hiring the wrong person costs your agency more than you might think.

According to Jörgen Sundberg, founder of Undercover Recruiter, a bad hire can end up costing your business around $840,000. That's not a number to take lightly.

Sundberg's team based their calculations on the cost of a second-level manager who makes $62,000 a year and is terminated after two and a half years. They considered the cost of hiring, onboarding, and retaining the employee, as well as the overall revenue loss associated with mistakes, failures, and missed business opportunities caused during the employee's doomed tenure.

If you work at a small agency, losing that amount of money over a single bad hire can cause unthinkable damage to your bottom line. There's simply no room for hiring mistakes.

To ensure your next hiring decision isn't a major pitfall for your business, we've compiled a list of common reasons behind poor hiring choices. Avoid these at all costs to make sure your next new hire succeeds.

1) You fall victim to "The halo effect."

Imagine you're a hiring manager conducting interviews for an account manager position. After a long day of mediocre and disappointing candidates, your next interviewee turns out to be eloquent, positive, and friendly -- a welcome combination of traits that impress you immediately. On top of his enjoyable presence, he has a pretty solid resume. You hire him right away.

A few months after he's been onboarded, you hear word from his manager that his performance has been disappointing so far, and he shows no signs of improvement. So what went wrong? How could the candidate who impressed you so much in the interview turn out to be a total dud?

This is a perfect example of the halo effect: a type of cognitive bias that occurs when we overlook obvious faults when someone impresses us in one particular area. In this case, you were impressed by the candidate's sociable demeanor, and assumed he'd be equally impressive in other areas. His resume might not have been stellar, but since you were already sold on his sociability, you didn't even notice you were overlooking potential issues.

Beating the halo effect starts with being aware of its impact, and developing a straightforward hiring system to offset its effect. Melvin Sorcher and James Brant -- partners with Sorcher Associates, a management consulting firm -- recommend putting an evaluation process in place which requires candidates to be assessed by a group of people from different levels and areas of the company.

"The process enables the group to probe a wide range of leadership criteria and obtain balanced and complete information," Sorcher and Brant wrote in Harvard Business Review. When a candidate is reviewed by a wide range of people, it exposes them to varying sets of opinions and biases, minimizing the potential impact the halo effect can have on the hiring decision.

2) You don't know what the position really requires.

Most job requirements come in list format: a neat index of basic skills, recommended experience, and personal traits that somehow combine to describe the ideal person for the job.

Unfortunately, succeeding in most roles requires more than a laundry list of vague qualities -- particularly in the fast-paced, ever-evolving agency landscape. Hiring managers seeking candidates for a new position should set aside time before the interviews to dig a little deeper and discover "the pivot" -- the elusive set of qualities that tips the scale towards one candidate over another.

"The pivot" is a term coined by Ram Charan, a business advisor and author of Boards That Lead. As Charan describes it, the pivot is "a strand of two or three capabilities that are tightly interwoven and required for the new leader to succeed." In other words, the pivot is what separates someone who will be an average performer in the role from someone who will truly flourish and exceed your biggest expectations.

For example, when hiring a new business development manager, the pivot might be a background in economics, an adaptive nature, and a unique ability to remain calm and collected in stressful situations.

"Directors who choose the right CEOs do a lot of work before arriving at the pivot," Charan writes. "They take the time to fully understand the company's current challenges and how the external context is changing. They read analyst reports, talk to insiders, and consult outside experts to expand their thinking."

Although Charan uses "the pivot" as a way to help companies hire CEOs and other major leadership positions, it's useful for all hiring managers to think about what specific abilities really put a candidate over the edge.

3) You focus too heavily on technical skills and not enough on intangibles.

Technical skills are important -- don't get me wrong -- but they hardly ever make up for larger issues with an employee's disposition, attitude, and work ethic. Hiring an employee primarily on the merit of their technical skills could cause you to overlook other major red flags -- and might lead to a wasted investment in an unfit employee.

According to a study conducted by Leadership IQ -- a leadership training and development company -- new employees rarely fail due to issues with their job competence or technical skills. In fact, of the new hires that were terminated within 18 months of being hired, only 11% failed due to technical shortcomings.

So what were the top reasons new hires didn't succeed in their new roles? Issues taking feedback, inadequate emotional intelligence, and a lack of motivation caused more employees to fail than gaps in technical job competency.

Check out the full breakdown of the survey below: 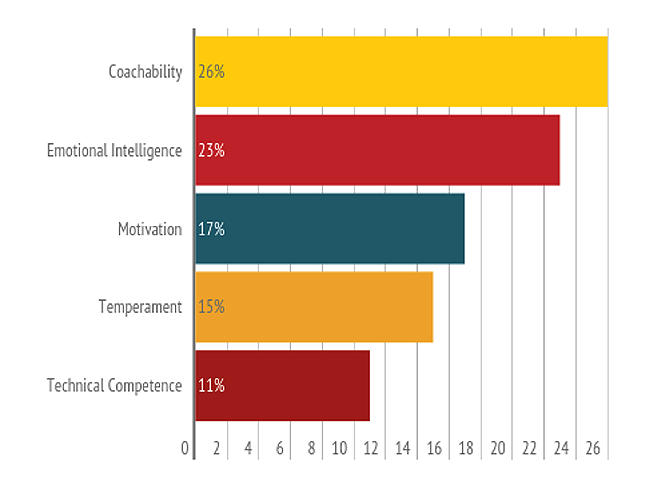 "The typical job interview process fixates on ensuring that new hires are technically competent," explained Mark Murphy, CEO of Leadership IQ, on their company blog. "But coachability, emotional intelligence, motivation and temperament are much more predictive of a new hire's success or failure. Do technical skills really matter if the employee isn't open to improving, alienates their coworkers, lacks emotional intelligence and has the wrong personality for the job?"

It's easy to get blinded by an employee's impressive technical skill set, but hiring managers need to look beyond the resume and make sure candidates have the right attitude, disposition, and mindset for the role as well.

4) You treat every open position like an emergency hire.

Sometimes it's necessary to get someone hired and onboarded as quickly as possible for the overall stability of the agency -- but most of the time, you can afford to take enough time with the hiring process to find someone who will bring the right energy to the role.

In periods of rapid growth, agencies often feel the need to acquire talent expeditiously, without much thought to the hiring framework or time line. With this attitude, it's easy for unfit hires to slip through the cracks when they wouldn't have otherwise been considered.

Linda Brenner, a coauthor of Talent Valuation and the CEO of Talent Growth Advisors, emphasizes the importance of prioritizing hiring for open roles according to long-term business needs.

"Start by identifying which roles are most essential to delivering on future growth commitments -- not just to continuing your operations right now," Brenner writes in Fast Company. "Finding and hiring top talent in those areas is most essential."

Once you've identified which roles to prioritize, develop a hiring time line that allows your team adequate time to select ideal candidates. If you start hiring now for roles that will be essential in the coming months or years, you'll be able to conduct a more thorough process that yields better candidates.

How does you agency approach hiring top talent? Let us know in the comments.

Corporate Image: Why Your Brand’s Public Perception Matters More Than Ever Now

Everything You Need to Know About Employer Branding