The Plain English Guide to Dark Posts on Facebook

This morning, I did my usual social media scanning before getting ready for work, and as I was scrolling Facebook, I began to notice ads for companies I didn't recall following. 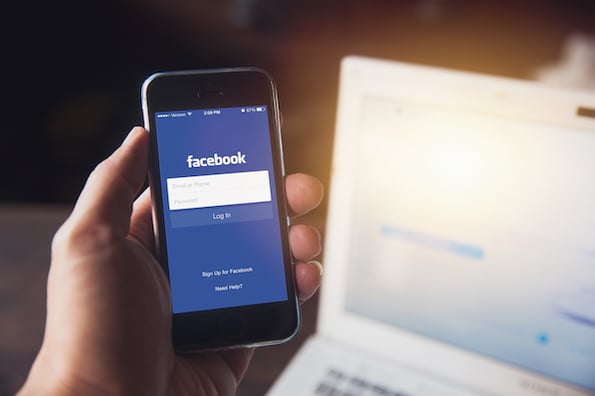 For instance, I read the blog from B2B company, Drift, pretty frequently, but don't follow the company's Page on Facebook. Even so, I still noticed this ad: 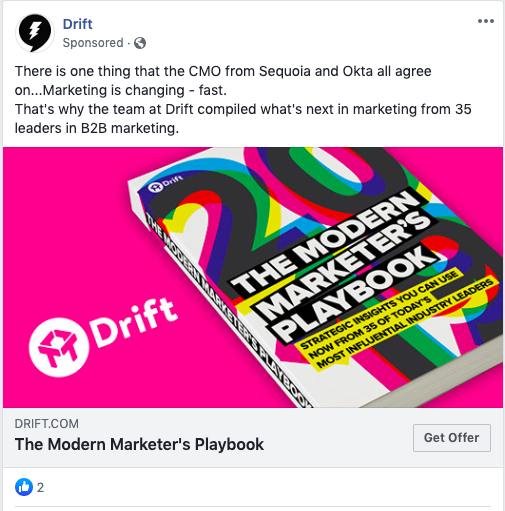 Even though this was a surprise, I wasn't too worried — I simply figured my web behavior had influenced the types of ads I was seeing, which in part, is true. But when I visited the company Page to follow it, I couldn't find the ad I saw above.

That was when I became intrigued: How does an ad that appears on my main feed not show up on that company's page?

Then, I realized what was going on: The ad I'd seen was what's known as a dark post. Dark posts target audiences specifically for lead generation and conversion.

Dark Posts: What Are They?

When talking about dark posts, there can be some confusion about what they are and what they do. For instance, they're entirely different from dark social, and are considered sponsored ads by a lot of channels. For a clearer picture, let's define what a dark post is.

For example, I don't follow Squarespace on Facebook, but I still received a targeted ad from the company, likely because my trackable web behavior reflects a portion of Squarespace's target audience: 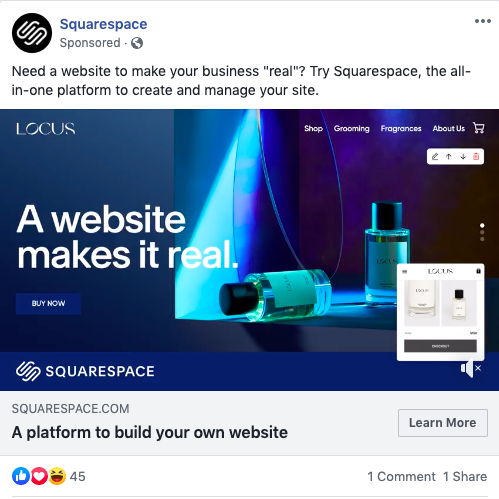 This post looks like a regular ad I would see from pages I follow on my news feed. But, when I click to go to the company page, the ad isn't there. Because of the fact that this ad appears on the timeline of an audience member who doesn't follow the company's page, and the ad itself doesn't appear on the company page, this post is considered to be "dark."

Dark posts are not to be confused with the term "dark social," which is a phrase used to describe the type of traffic earned on social media that can't be detected from social media tools.

If you want to engage with more audience members and show up on their feed with a specific ad, dark posting can be a helpful tool. You can have more control over what your target audience sees, because the content is still an ad. Additionally, you can tailor the ad's content to introduce your brand, what it's about, and design it specifically for lead generation.

Though dark posts generally have the same features across the board, things are slightly different for Facebook, so let's cover what that entails.

A Facebook dark post, or 'Unpublished Page,' is an ad that isn't published on the advertiser's Business Page or feed immediately, but rather, shows up on the feeds of targeted customers. You can create these ads in Ad Manager, and choose how to distribute them.

They also allow for better results for A/B testing — you can test ads out with customers who have already interacted with your brand before you send it out to new audiences.

With dark posts, you can control how many times and which audiences are seeing certain posts, so you'll know that you won't show converted leads ads that aren't meant for them. They are a targeted ad, just shown differently, and to a more specific audience. The decision-making ability over the types of posts your targets are seeing is more in your control.

When you create a dark post, you can manage how the ad is seen, and if it will be scheduled for a future date, or if it will be part of a promotion inside of a larger set.

At this point, you can probably tell how dark posts may seem a little controversial — they can be interpreted by audience members as a sneaky advertisement, rather than a personalized ad experience. That's why, in Facebook's effort to maintain transparency, some features about dark posts (and Facebook ads across the board) have changed since their inception: 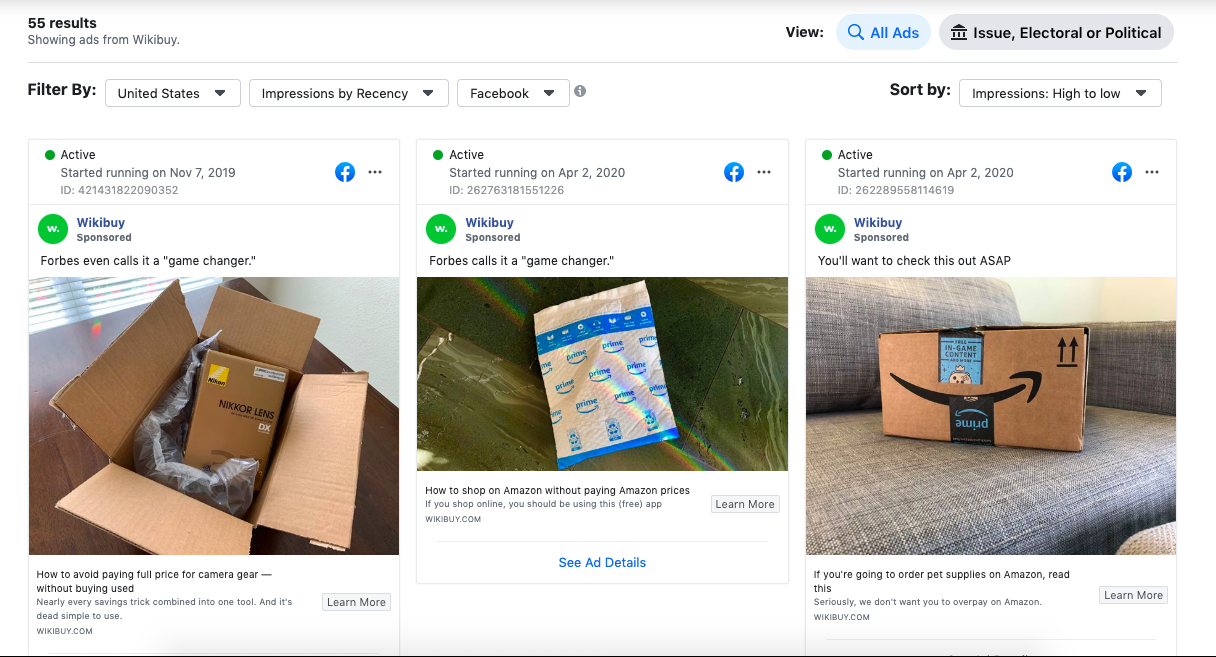 There are two ways a user can access the Ad Library, and the first is by URL. If you're logged into Facebook, you can simply type in facebook.com/ads/library, and you can begin searching. If you're on the company's specific Page, there will be a "Page Transparency" section in the right sidebar:

Clicking "See More" will take you to a page that shows more details about the company, such as the year it was founded and important links. At the bottom of this page, you will see a box that notes whether or not that company is running ads, and will offer an option to visit the Ad Library for that company:

This box also indicates the type of ads that company runs, which gives audience members a better idea of if they're seeing an ad.

Now that you know about dark posts, how they interact with audiences, and what you can use them for, let's talk about how to make them.

To create a dark post on Facebook, you don't need to do much that's different from creating a different type of ad. We're going to detail what you need to know, and offer optimization tips.

However, you'll want to refer to another one of our posts for a more robust tutorial on how to run Facebook Ads in general.

First, you're going to go to Facebook Ads Manager. If you've run Facebook ads before, you're probably used to this tool. If not, think of Facebook's Ad Manager tool as a home base for the ads you run on Facebook, and other Facebook-owned platforms. 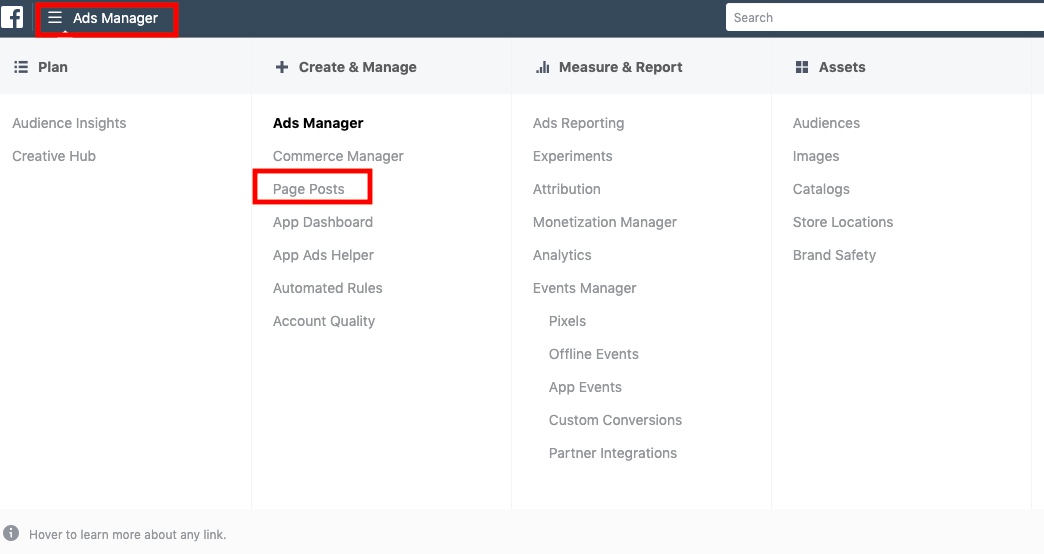 From there, you're going to select the "Page Posts" option, which is the second choice under the Ads Manager subsection. You can find this subsection under "Create & Manage."

Next, you'll be taken to the screen where your dark posts will live. If you have already published Page Posts, you'll see them here, regardless of if they're unpublished, published, or scheduled.

If you don't have any Page Posts yet, your only option is to create one, so click that button to get started! You'll see this screen after: 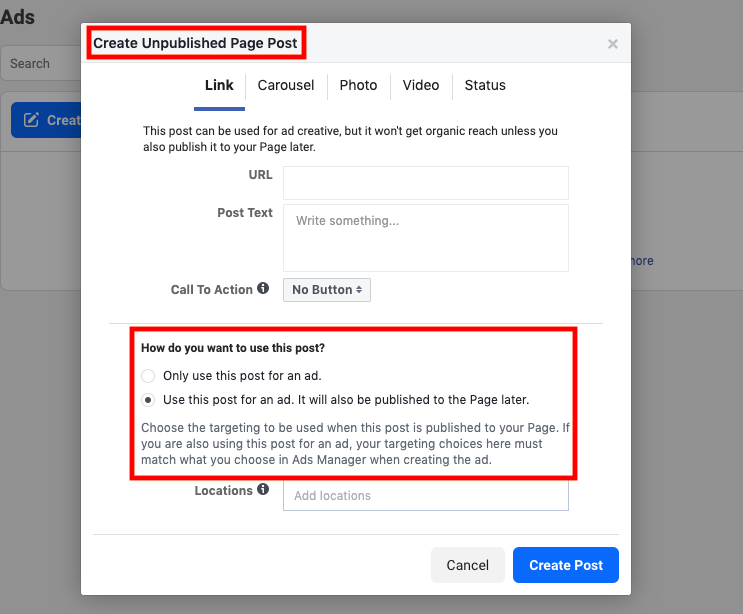 From here, you can fill in the details of your ad. When you choose how you want to use the post, keep in mind that the first option, "Only use this post for an ad," won't publish the post to your company Page, which is what you want. The second option will eventually post to your Page.

3. Select or create your audiences.

Previous users of Facebook Ads Manager can choose their already-segmented ad sets in this section. For those who are new to it, when you create a campaign, you'll have a chance to create audience segments: 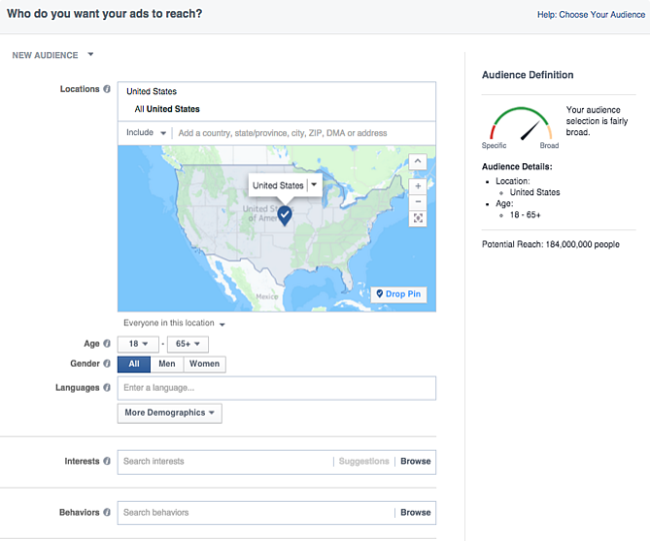 Notice how specific you can get with your audience segmentation, including age, gender, languages, location, interests, and behaviors. These options were put in place to help you reach the audiences that will connect with your messages the most.

You can access this page by going from the drop-down box to Ads Manager > Audiences > Create Audience > Custom Audiences > Facebook Page. Then you'll be prompted to create and segment audiences:

When you're comfortable with your post, you can optimize it. Here, we're going to mention a few optimizing tips you can use. For an extra, deep dive look into optimizing an ad for Facebook, check out this ultimate guide for Facebook marketing.

We're going to go over what I've affectionately dubbed, "The Three R's of Quick Optimization." They are: Run, Review, and Resize.

And with that, your dark post, or, Unpublished Page post, will be ready to take its first steps into the news feeds of leads, just waiting to be converted. Now, you know the ins and outs of a Facebook Unpublished Page post. How are you going to use them to your advantage?

An actionable process for launching Facebook Ads, including hacks from members of HubSpot's Paid Ads team.