Asking for a raise or promotion can be scary, especially when your company is going through shifts related to world events. 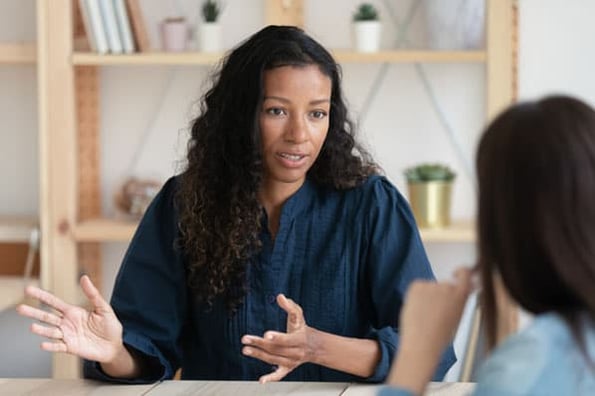 In early 2021, Fishbowl conducted a survey that shed some light on the gender wage gap, which continued if not grew in 2020.

The survey of nearly 17,000 professionals revealed that 63% of respondents have avoided asking for a raise following "changes related to the pandemic."

When splitting the whopping number of respondents by gender, 42.4% of them were women, while just 31.79% were men.

While some might be shocked by this data, many aren't. After all, marketing departments have been known to get the least budget, smaller headcounts, and less overall investments.

Meanwhile, women have been seen to negotiate less and apply for lower-level roles than men with the same experience. In a recent LinkedIn post, Femme Pallette CEO Lucy Nuemanova shed more light on why women generally don't negotiate as often as men.

"Many women avoid having these conversations because they don’t want to be perceived as ungrateful, or greedy, or needy by management, and therefore many times women tend to wait to be rewarded," Nuemanova explained.

If you're a woman in the marketing world -- or any industry for that matter, this data and insight from other female professionals might have you wondering, "When is it appropriate to ask for a raise or promotion?"

Below, I've listed a few times people commonly ask for or consider asking for a raise or promotion.

When You Should Ask for a Raise or Promotion

1. When the scope of your role grows or shifts.

In the early days of holding a role, your work might closely mirror the tasks listed on the job posting you applied to. But, as you gain credibility and visibility at your company, you might also gain more responsibilities that greatly expand on your original day-to-day role.

“Many people are wearing more hats now and having to learn new skills. All of these are valid grounds for asking for a raise and should form the basis of your argument when you make your pitch," career advisor Gaurav Sharma said in a recent interview.

For example, while being asked to report on your marketing projects might be a natural progression of your role and not worthy of asking for a raise, taking on direct reports when your original role didn't involve management, or being asked to run a new, time-consuming marketing initiative for your company could signify a significant shift in your duties and work-life that merits a change in title or compensation.

2. When you spend a lot more time at work than anticipated.

As you gain more responsibilities or expectations, you might find yourself working longer hours or getting asked to do more time-consuming things -- like regular business trips. If this was not part of your initial role or was not explained to you when you accepted a role that involved these requirements, it might be worth considering a raise or promotion request.

3. When you complete a pricey course or degree that will benefit your company.

Usually, a course or certification costs time and money. But, sometimes, employers cover the cost knowing that your growing skills will benefit them in the long term. If your company doesn't compensate for education in any way, but you get an additional degree that boosts your ability to work, you should consider asking for a raise.

However, if you expect to receive a raise after finishing a degree or taking a course Abby Kohu, an author and HR professional, says you should do so ahead of receiving the degree or certificate

“Ideally, you should ask about the raise before you get the degree to set the expectations,” said Kohut said in an interview with Bryant & Stratton College. “The best time to hold the conversation is during the normal performance review cycle. Begin the conversation by discussing your work performance and accomplishments on the job. Then, explain how the degree has given you the additional information that will help you produce even more.”

4. When you consistently hit all of your goals.

At some point in your role, you might find that everything comes naturally to you. You rarely run into challenges or feedback and aren't exactly sure how to level up further with the work you're already doing well. Because of this, you might start feeling bored or too complacent in your role.

When you're regularly crushing your goals or receiving great performance reviews, it's a good sign you're ready to take on new challenges or more responsibilities with a raise or promotion attached.

5. If you haven't received a wage increase in a while.

While you might not want to ask for a raise within the first few months, or even the first year, of your role, it's important to track the time you've been working with no increase in wages. Even if you haven't dramatically changed the scope of your role, you still could justify requesting a raise if you have a solid history of good performance but haven't received a wage boost yet.

Even if you think your company will know to automatically give you a raise or promotion eventually, it's worth inquiring about if you haven't had a wage increase recently or ever.

In a recent LinkedIn post, career coach and entrepreneur Jasmine Escalara wrote, "If you aren't telling your boss, supervisor, or anyone what you want, what makes you think they will give it to you?"

"If you are looking for a step-up, promotion, or pay raise, then you have to SPEAK-UP, or else it will never happen," Escalera advised.

6. When the cost of living increases.

While many companies will give annual raises or offer salaries that build in the estimated cost of living increases, keep how much it costs to live in your area in mind if your employer does not use this strategy. If you're working full-time, you always want to make sure your company is paying you enough to afford decent rent prices, food, utilities, and other necessities.

Is There a Best Time to Ask for a Raise?

If you identify with one or more of the items on the list above, it might be time to start thinking about a promotion or raise. But, while you should discuss the raise you deserve with your manager eventually, there are certain times that could increase your chances of actually getting a pay increase.

Many companies manage their budgets, headcount, and raise-related budgets at specific times of the year. So, some career sites, like Indeed, suggest:

Inversely, there also are poor times to ask for a raise, such as after a bad earnings report, iffy performance review, or another time where your manager or boss might not be in the best mood. As you plan to have this conversation with management, take note of times where they'll be more empathetic and responsive to your request rather than frustrated or annoyed by it.

If you're very unclear of when to ask for a raise or promotion at your company specifically, career consultant Todd Henry suggests paying attention to your office's financial or promotion "rhythms" and making your request during times of the year when you hear about the most promotions.

If you're excelling in your role and feel you need a raise or promotion in the next year to stay at your company, you shouldn't let the pandemic permanently hold you back from having a transparent, but friendly discussion with your boss about the career or salary growth you'd like to achieve soon.

Having the Wage Discussion

it's important to remember that managers expect to have a salary conversation with employees eventually. In fact, many companies separately budget annual funds just for raises and promotions. So, asking to meet with your boss about your salary or future shouldn't come as a major shock to them, especially if you're doing well in your role.

Additionally, if you have a good manager, they'll likely respond to career growth conversations in a respectful, thoughtful, and transparent way by explaining why you can or can't get a wage increase and what you'll need to do to get there.

"No matter how well-timed your ask is and how deserving you are, there are any number of reasons your manager might reject your request for a raise — and some of them might have nothing to do with you or your performance," writes Henry.

"The best response to being turned down is: “What will it take for me to earn a pay raise?” Henry explains. "Know what the expectations are, so that the next time you ask, you are backed by data that aligns with your manager’s threshold for a raise."

Ultimately, when you start the wage conversation with your manager, they'll learn you're looking for upward motion, understand your professional growth needs, and will know what they need to do to retain you as a talented employee. Similarly, if your company can't give you a promotion or raise right when you ask, you'll know why, what you need to do to get to the next level, and if your company will be the right place for attaining long-term career goals.

Want to get more tips for success in your marketing role? Download the resource below.