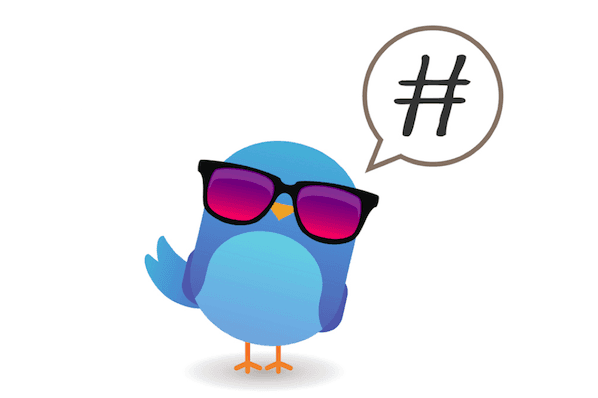 The marketing spoof is one of the best and worst institutions in our industry.

Done well, it can result in one hilarious comedy skit after another, like SNL's recent parody of an ad for the smart home assistant, Amazon Echo. Even Apple's advertising has been parodied so far and wide over the last decade, there may be more fake "Mac vs. PC" ads than real ones.

Done poorly, though, pop-culture parodies can result in awkward laughter, uncomfortable silence, or even lawsuits. For instance, a temptation to hijack the success of Old Spice yielded this painful shower scene, while this doctor's attempt landed him in hot water with the legal team at Procter & Gamble

Indeed, the internet has significantly reduced the barrier to entry for anyone with the ambition to mock real brands. Nowhere is this barrier lower than on Twitter, and today, brands like Netflix are making the funnies themselves.

Of course, we've got our favorites. Here are our top 10 funniest parody Twitter accounts we think you should start following today, along with some shining examples of their tongue-in-cheek Twitter brilliance.

1. @SunnyinHawkins -- It's Always Sunny in Hawkins

You don't have to watch "It's Always Sunny in Philadelphia" to enjoy this Twitter handle, but "Stranger Things" fans in particular will get a kick out of this hysterical take on one of their favorite Netflix shows.

The setting of "Stranger Things," Hawkins is a fictional town in Indiana that's played host to a series of demonic events -- all centered on one group of curious kids. It turns out the chemistry between the cast is so adorable, you can't help but imagine them in a comedy much like "It's Always Sunny in Philadelphia," the longer-running show on FX. Well, imagine no more: 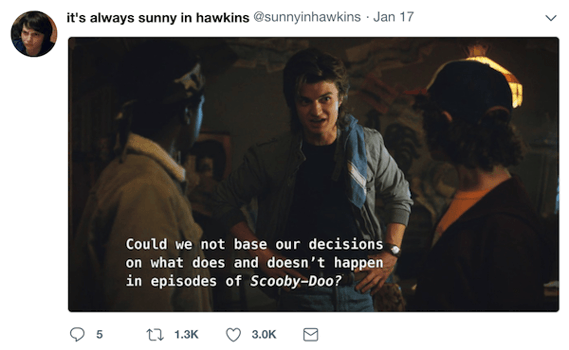 Those in the Royal Family are among the most beloved Brits in the world, but the Queen of England is far better known for her leadership and smarts than for her sense of humor.

While the power trio of Prince William, Prince Harry, and Princess Kate have lightened up public appearances with dancing or informal banter (karaoke with Taylor Swift, anyone?), the Queen has remained steadfast in a traditional approach to interacting with her constituents.

This focus on the traditional provides the perfect springboard for Twitter mockery, some highlights of which are outlined below:

3. @NetflixIsAJoke-- Netflix Is A Joke

Who would say such a thing?! Actually, Netflix would.

This is a verified sibling account to Netflix, dedicated to the stand-up specials and comedy series it streams for subscribers (get the account name?). And it pokes fun at Netflix as much as it pokes fun at us for the hilarious things we might binge-watch at midnight.

In between the valuable new-show announcements, it engages with the comedians we all love while ensuring no one subscriber holds their chin too high for their weekend plans:

Is Central Sq. Pigeon the most popular parody Twitter account on the web? Certainly not ... but it's one of the funniest Twitter accounts in Greater Boston.

Many have heard of common squirrel, a parody account that documents the daily life of a mid-sized rodent. However, I'd personally take Central Sq. Pigeon, formally known as Earnest Pigeonway, over common squirrel any day. It helps that Central Sq. Pigeon is run by HubSpot designer Tyler Littwin, but what wins the day from our perspective is the stunning insight into the inner workings of a city pigeon navigating the big bad world of Cambridge, Mass.

Here's a bird's-eye view (sorry) of what you can expect by following him:

This isn't just a must-follow for any space lover. It's amusing internet fodder for everyone who advocates for a more science-literate culture -- even if it starts with a cute, fake Twitter handle inspired by the real Mars rover, Curiosity.

The feisty space robot may or may not give you all the facts about the red planet, but it has the approval of numerous space authorities: Bill Nye, SpaceX, and Space.com are all known Twitter followers!

Enjoy its extraterrestrial innocence, at your leisure:

The Onion is the unmatched master of sarcasm and spoofs, so it's little surprise that its sports-related Twitter account offers the funniest reflections on sporting events and celebrities of the day.

Most sports-oriented Twitter accounts ebb and flow on frequency and quality or require significant knowledge of the team or athlete involved. @OnionSports, though, runs the gamut, mocking avid fans and large sports culture events alike, making it the ideal sports parody account of choice to follow -- especially when the Super Bowl nears:

He Who Shall Not Be Named (of Harry Potter fame) is a force to be reckoned with at Hogwarts and in the Twitterverse. The Dark Lord account has amassed over 2.2 million followers thanks to its witty banter. Some highlights include Quidditch jokes during the Super Bowl and the Bieber commentary below.

Sure, there are some jokes that you have to be a Harry Potter fan to understand (Snape references are pervasive), but many of the tweets are funny with even a cursory knowledge of J.K. Rowling's books and the films they spawned (especially after a few swigs of butterbeer):

One of the world's most beloved action stars is not only a staple on the infomercial circuit, but he's also a Twitter gem for "Chuck facts" sure to delight any cocktail party or water cooler.

One of my favorite standouts includes "Love does not hurt. Chuck Norris does." It's hard to choose one favorite tweet, however, when this parody account offers wisdom ranging from coding jokes to "Only Chuck Norris can prevent forest fires."

Self-described "Evil Orphan Ani" (Anakin conveniently being Vader's real name), this guy sounds more like a passive-aggressive actor than the Lord of the Sith. And it's pretty darn funny.

Since the Star Wars franchise was rebooted in 2015, this parody Twitter account has had plenty to talk (or rather, rant) about. From grilling Star Wars fans about their favorite character to reminiscing over some of his most terrible accomplishments on behalf of the Galactic Empire, there's no shortage of content to keep the Twitterverse focused on a galaxy far, far away:

Elon Musk's escapades as an entrepreneur and marketer are well documented. The PayPal veteran and Tesla executive is known for his visionary ideas, outlandish press conferences, and dynamic relationship with realism. From announcing a high-speed Hyperloop between San Francisco and Los Angeles, to a series of high-profile battles with journalists, Musk is long on vision and short on patience -- which makes him an ideal candidate for a parody Twitter account.

This absurd account is certainly worth a follow for its sketches, witty asides, and running commentary on all of the Valley's most overused buzzwords: 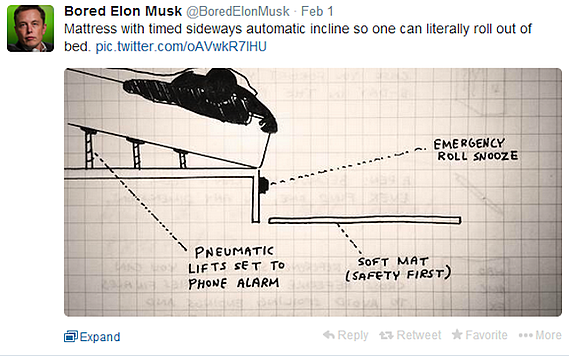 Parody Twitter accounts offer a welcome break (and laugh) in the middle of a long day, but they also remind all of us who use social media regularly to have a sense of humor and think about what our customers, prospects, and leads actually want to see from us on a daily basis. Sometimes, it's to not take ourselves too seriously.