Gender Neutral Pronouns: What They Are & How to Use Them

Use this free template to outline the inclusivity of your organization.

In the past few years, the U.S. has made some small but mighty strides towards inclusivity, and language plays a big part in that. 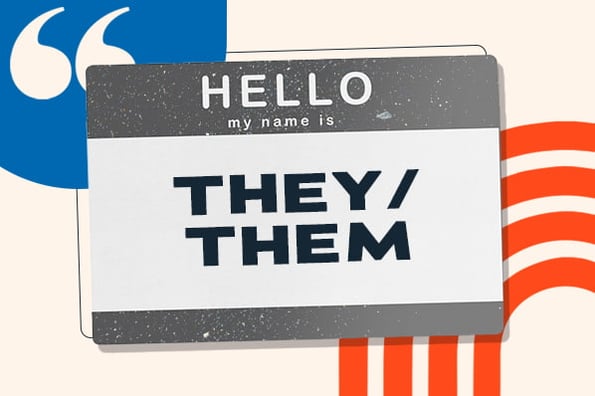 We've become rightfully cautious when we label other people, and are learning the importance of asking permission before identifying someone as a certain gender.

In my English class in college, for instance, my teacher was progressive enough to say, "Please let me know which pronoun you'd prefer I use for you." While this might seem arbitrary or unnecessary, it's not -- everyone has the right to self-identify with whatever pronoun they feel comfortable (or, to avoid identifying altogether).

To avoid accidentally offending someone at the office before you know their preferred pronouns, it’s important to use gender-neutral pronouns in your workplace conversations.

Gender-neutral pronouns are words that don't specify whether the subject of the sentence is female or male. 'They', for instance, is a third-person pronoun that is gender neutral. Other gender-neutral pronouns include 'them', 'this person', 'everyone', 'Ze', or 'Hir'. If you're not sure which pronoun to use, you can also use that person's name.

Gender-neutral Pronouns, and How to Use Them

Second, "he and she" are two extreme binaries that don't leave room for other gender identities. This can be hurtful for individuals, such as transgender or gender queer communities, who don't identify with "he" or "she".

Ultimately, you don't want to make incorrect or hurtful assumptions about someone's gender. Just because someone appears feminine or masculine doesn't mean they are a man or woman -- they could be agender, nonbinary, or uncomfortable identifying with "he" or "she".

Typically, you won't use one of these gender-neutral pronouns unless a colleague asks you to identify them as such.

However, there are more traditional gender neutral pronouns you can introduce into your everyday conversation, regardless of the individual. These include "Them", "They", "Their", "Everyone", and "That Person".

When in doubt, refer to someone by their name, rather than "him" or "her".

"They" is one of the more common gender-neutral pronouns, and it's easy to incorporate into your daily conversations. Here are some examples of how to use it:

You probably use "they" "them" and "their" often in your everyday language, even when you know someone identifies as "he" or "she". It's a natural substitute, but can go a long way towards creating a more inclusive office culture.

Finally, when addressing people in a meeting, it's best to say, "Hello, everyone," or "Hey, team." You'll want to avoid "Hey, guys", or similar phrases, since "guys" is typically masculine.

How to Learn Someone's Pronouns

When you first meet someone, you don't want to ask about their pronouns. This could make them feel like you're asking them to out themselves as transgender, agender, or nonbinary, which they might not want to do, particularly if you work in a conservative office.

Instead, introduce yourself with your pronouns: "Hi, I'm Caroline, and my pronouns are she/her." By sharing your own pronouns, you're allowing the other person to share theirs, but not forcing them to.

Additionally, avoid saying "preferred" pronouns. Despite the popularity of the term, it's incorrect, since "preferred" implies someone's gender is a preference.

Ultimately, using gender-neutral pronouns doesn't require too much effort on your part, but it could make a huge difference in creating a warmer, more inclusive workplace environment for everyone.