I Looked at Everything Google Is Tracking on Me. Here's What I Found.

When data privacy began making headlines this year, many people had a closer look at their app settings.

Questions like, "Is Facebook listening to my phone calls?" and "How much ownership do I have over my data?" began to arise, with users scrambling to switch off location tracking, download their social data files, and considering deleting certain apps altogether.

When I downloaded my own Facebook data, for example, and saw the extent of information it has about me -- I also turned off certain settings, and not just on that social network.

On Google, too, I paused what it calls Location History: its ability to save your mobile device location history to better personalize your maps (if you use Google Maps, it's safe to assume) and "recommendations based on places you've visited."

But here's the thing: According to a new report from the Associated Press (AP), some mobile Google services -- like maps and browsers -- could be automatically storing your location data, even if you’ve paused Location History.

So how (and why) is Google still storing this information -- even with these settings turned off? And what, exactly, does Google know about me?

I decided to take a closer look.

I Looked at Everything Google Is Tracking on Me. Here's What I Found.

A Bit of Background

When users first opt to pause Google's Location History, they'll receive a message that reads, "some location data may be saved as part of your activity on other Google services, like Search and Maps."

That's where this information is being stored -- in a setting, it turns out, under Web & App Activity.

While the name doesn't suggest that it may be tracking your location history, Web & App Activity is a separate setting that Google uses to track and save your search query and other behavior on Google apps -- like Home, Assistant, or Maps.

In Google's case, the company says the tracking and saving of this activity -- which can also be paused, but has to be done so separately -- lends itself to quicker search results and improved recommendations.

But it also lends itself to more personalized ads, which is the same case that Facebook makes for its use of data to inform advertisements that appear in users' feeds.

By allowing advertisers to target users based on interests and demographics -- data that Facebook says is not personally identifiable or it sells, ever -- the content users see is more relevant, making for a better experience. 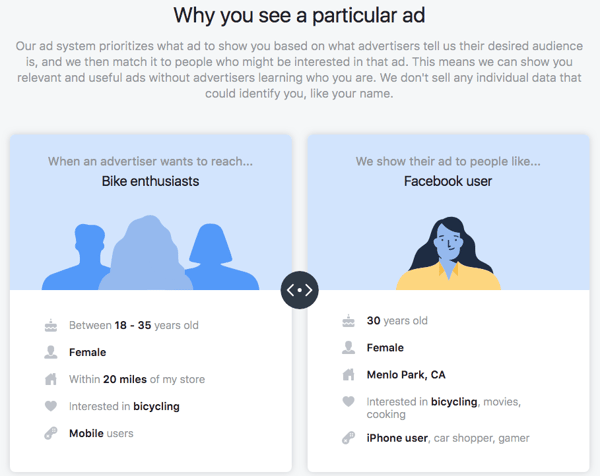 Google makes a similar statement about how its ads work: that it doesn't sell your data to anyone, and that any data it collects or activity it tracks is to create a more personalized, relevant experience. 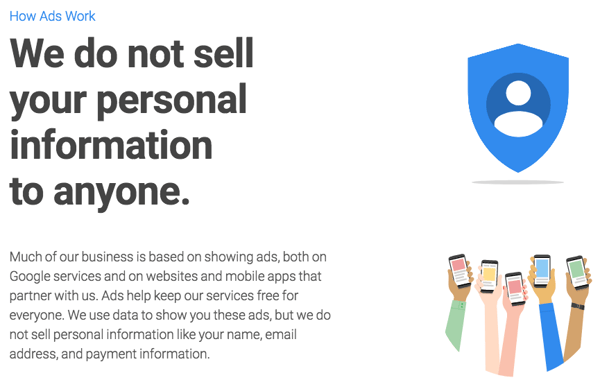 And while I have Google's ad personalization turned off -- it's still collecting every single bit of activity I conduct across its apps and products.

What Google Is Tracking on Me

To start, here's a look at the various products and services where Google is tracking my activity: 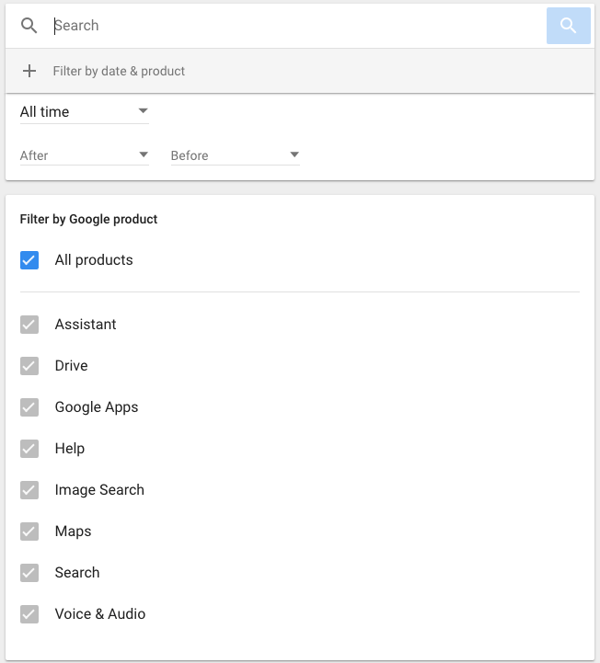 To be clear, Google has this information about me, specifically, because I've conducted this activity while signed into my Google account.

What isn't quite as clear, however, is how much Google is able to track on users who are not signed in -- or if it has a way to later attach this behavior to a particular user once he or she signs in or creates an account.

To start, Google is tracking every single query I've made on its search engine, on every device I'm signed in on -- from my phone (an iPhone, not a Google or Android operating system, where I do largely use Google's Chrome browser), personal laptop, or work laptop. 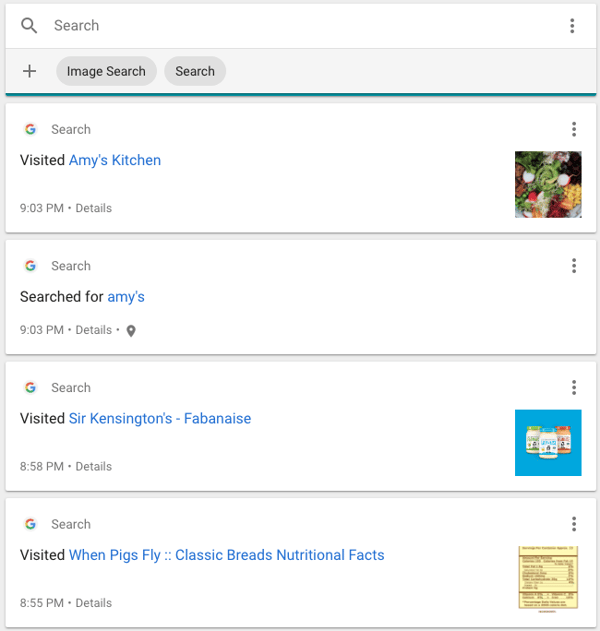 I chose some of the less embarrassing results to share here -- and left out, for instance, proof of my curiosity of certain reality TV personalities' net worth. And while Google says that you can delete this activity, it remains unclear if and how long it remains stored. 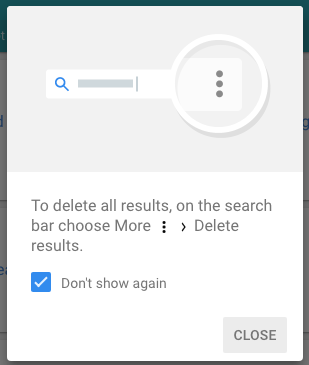 I have, admittedly, grown a bit dependent on my smart speakers. After all, at one point, I tried using three of them.

But I've come to use my Google Home speaker more than the others, often asking it what time it is, to play white noise, or to ask for the current temperature in my neighborhood. 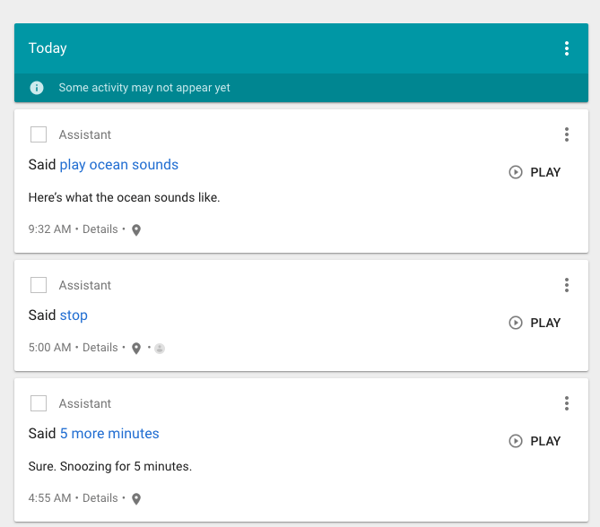 Did you catch that last part? "In my neighborhood." I don't just ask Google what the weather is like in Boston -- because of microclimates, I ask what the temperature is in my particular location.

That's one way Google might be able to track where I am.

Combine that with some of my search history -- e.g., "best facial in Boston" -- and Google has even more information about where I might be, or be going.

That's where things start to get tricky.

The AP's investigation found that data pertaining to Princeton privacy researcher's Gunes Acar travel was saved to his Google account -- even though he had "Location History" paused.

In fact, researchers were able to build an interactive map of locations Acar -- who uses an Android phone -- visited over the course of three days. 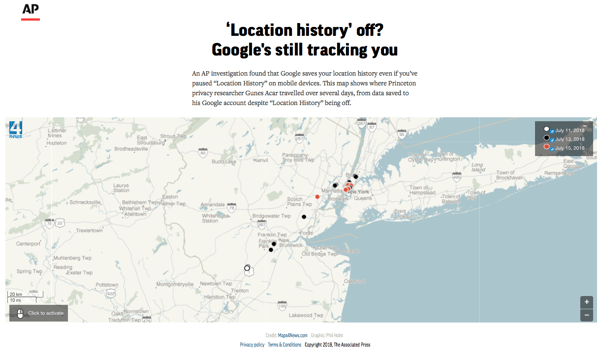 Upon closer inspection, I also saw that my "current location" was attached to specific tracked activities ... even though I have Location History turned off.

When I searched for a recipe, for example, Google tracked that I did so from my "current location" -- which is also stored. 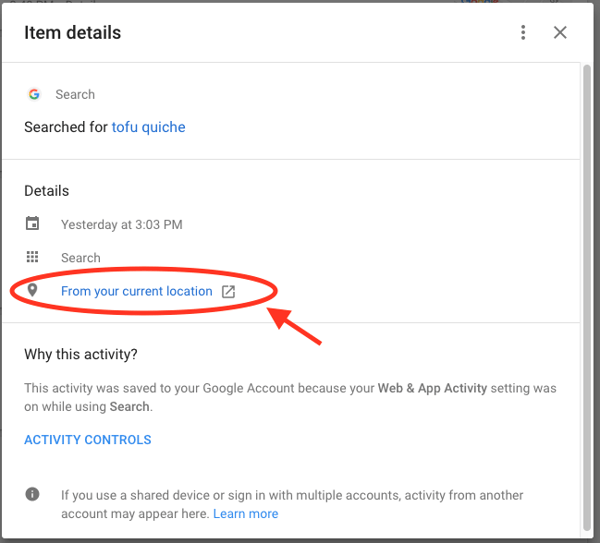 It did the same thing when I used my Google Home to set my alarm. 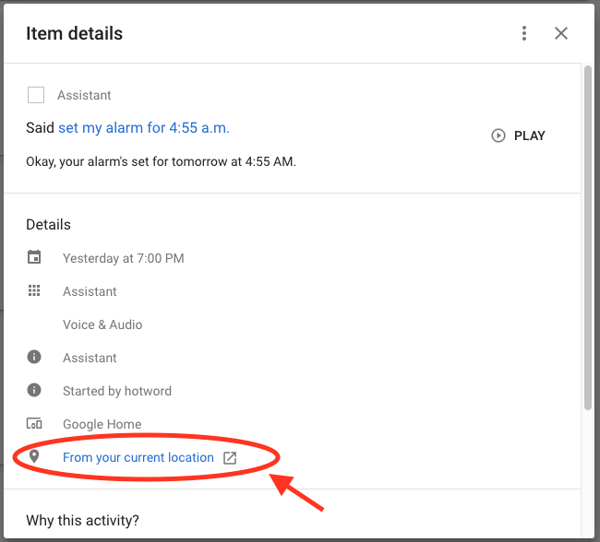 That's probably how the AP was able to compile a map of Acar's known locations over several days -- because of tracking points like these.

But why is it that Google attached a location to only some of my activities -- like Assistant commands or search queries -- and not all of them?

One possible theory is that I also had Google Maps running in the background at the same time. Depending on your mobile device's location settings, certain apps can determine your location at all times, even if you're not using it at a given moment.

Those are the settings I had for Google Maps on my phone -- which I quickly changed upon this discovery. 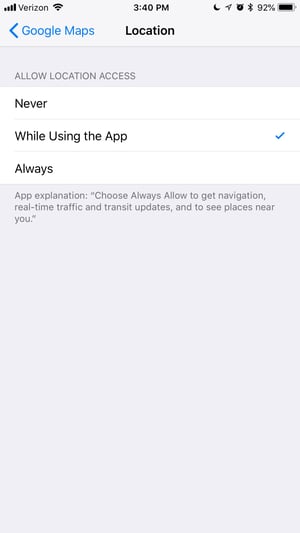 But I also had a similar reaction to many of those quoted for AP's investigation -- in short, that it was "not cool" that my location was being tracked, despite having (thought that I) turned off Location History.

And even if Google hadn't attached a location to these specific activities, some of the searches I conduct -- especially those to find nearby business on Maps -- can provide enough information to deduce my general whereabouts.

While Google states its reasons for tracking that information -- and explains how it's kept safe -- what's more troubling is the number of users who are potentially unaware that this information is being collected.

Google, for its part, tells AP that it's been nothing less than transparent about these settings -- and that turning them off should be intuitive.

"There are a number of different ways that Google may use location to improve people’s experience,” a Google spokesperson told the AP. “We provide clear descriptions of these tools, and robust controls so people can turn them on or off, and delete their histories at any time.”

Have you noticed unusual location or activity tracking? Feel free to reach out on Twitter.