How to Run a Successful Kickstarter Campaign: Insights From RingSafe 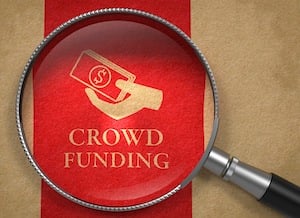 In 2013, 3 million people from 214 countries and territories (and all seven continents) pledged $480 million to Kickstarter projects. From Cards Against Humanity, to Pebble smartwatches, to a human-powered helicopter, Kickstarter changed the world and lives of hundreds of thousands of small business owners and entrepreneurs through its crowdfunding platform.

But we want to focus on this year, and, specifically, one project that has started and been fully funded in less than one month through the crowdfunding site. The two people behind this project were kind enough to share their campaign journey with us.

We interviewed first-time Kickstarters Kirsten and John Newbold-Knipp about their campaign for RingSafe, a modern clasp designed to prevent losing your wedding ring. We discovered how they succeeded in fully funding their campaign in just 30 days, exceeding their goal of $15,000 with a few days left to fundraise.

Check out the interview below, and learn how you can apply some of their campaign tactics and tips to your own crowdfunding campaign.

Q: Why did you create RingSafe?

A: We invented RingSafe because John misplaced his ring just a few days after our honeymoon, and after talking to others, we realized it's a really common problem. Our survey shows that 4 in 10 men lose their ring at some point, and online data suggests 30-40% of all married people lose rings at work, at sport, or around the house.

Q: Why did you decide to use Kickstarter?

A: We had gotten lots of positive feedback about the concept of RingSafe from friends and family, but wanted to know whether the broader world would find it valuable. While we could have funded production ourselves, there was a risk that we were just dropping in money without certainty that there is a real market and without enough feedback to make the product appealing. Kickstarter was a way to combine test marketing with market feedback and reduce the risk of funding ourselves.

We have seen some amazing ideas come out of the Kickstarter community and thought this was the optimal avenue to try it ourselves. Getting some early press and publicity via Kickstarter before we launched fully online is something we think will be helpful for the product in the long term.

Q: How long did it take you to set up your campaign?

A: The actual set-up is quite fast, if you are disciplined in your approach. Our ideation phase was 3-4 months, and then the real ramp-up to our campaign was only about six weeks. But, we should have done more prep in advance to make it an even greater success.

Here's a timeline of our relatively rapid campaign approach:

Q: What channels did you use to promote your campaign? Which ones were effective?

A: We used several channels to promote the campaign.

We've been pleasantly surprised by how engaged the Kickstarter community is -- our largest number of backers come from within the referral traffic from Kickstarter.

This is an area to invest in early and often. We developed a list of about 50-60 publications that were targets for us and did both direct outreach as well as outreach via any LinkedIn connections we might have in common with an editor.

Developing a short, sweet pitch that is tailored by the publication and providing links and image assets to make it easy to cover your idea is important. Develop a newsworthy angle and press release for the first few days of your campaign. We weren't as confident about our 'newsworthiness' and decided to postpone a PR, which was a mistake. Even if we had gotten light pick-up, it would have contributed to the early success of the campaign.

We built a small social following before our campaign -- just about 200-250 folks on Facebook and Twitter combined, which has now grown to 300+. This is an area where investing further in advance would have really benefited our campaign. Some of the Kickstarters that have 'blown it out' are actually 1-to-2-year-old ideas that have built thousands of social followers before they tested the waters on Kickstarter.

Don't underestimate the reach and support of your own personal network. Both John and I created free MailChimp accounts and uploaded our contacts from across all our networks. We have tried very hard to limit email to just 1-2 touches, with one more coming at the close of the campaign, and, in each case, we've seen a nice bump either from direct backers or from our network sharing the RingSafe story with their friends.

We used some of the classic tenets of complementary product marketing. During our campaign, we found other projects we liked and respected that were targeting similar audiences. We backed them and then offered to share their projects with our backers and social followers if they would do the same in return. Not all said yes, but several did, and we've each shared something of value with our followers and gotten a little lift back -- we've even shared advice and tips.

A: Kickstarter is relatively easy to set up, and the community truly is very engaged and helpful. A few things that were really pleasantly surprising:

Q: If you were to run a crowdfunding campaign again, would you use Kickstarter?

A: Probably. While there are a few other crowdfunding tools out there, the learning that we got using Kickstarter and the strength of the community would make it easier for us to be successful a second time around. We did consider Indiegogo early on, but the only benefit is that they allow for partial funding. In our minds, if we didn't hit the funding goal, then we probably shouldn't proceed anyway, so the size of the Kickstarter community outweighed the Indiegogo benefit.

The pros of using Kickstarter certainly outweigh the cons.

Q: If you were helping someone run a Kickstarter campaign, what's the one or two things you would tell them to do to be successful?

1) Build your community and following early.

Try to have at least 500-1,000 engaged fans before you go live. It will boost your early virality and make it so much easier to get coverage in the press and featured spots on Kickstarter.

All the projects that are winning have pretty slick videos and images. Those that fail are often very poorly executed. Today, it doesn't have to cost an arm and a leg to do this -- our total spend on logo, video, and images before our campaign was under $500. It's not free, but we do have some skin in the game to make this work. We even negotiated with our freelancers to give them a success reward if we are fully funded, to get them engaged with you to win.

What are your thoughts on using Kickstarter? Think your organization could benefit from utilizing it for fundraising?