Why HQ Trivia Is Actually a Genius Marketing Strategy 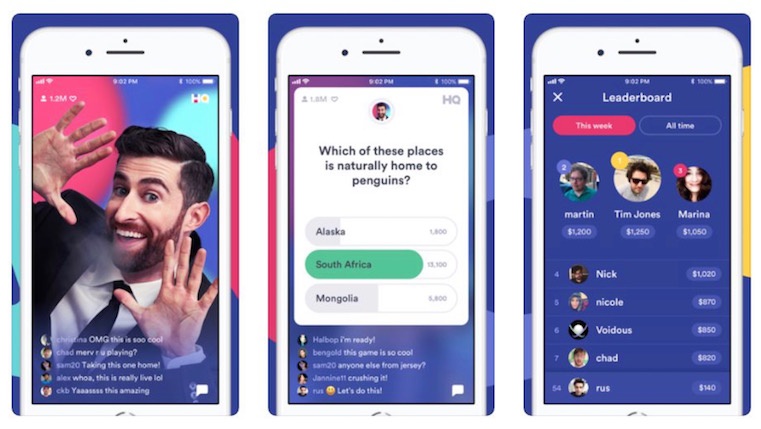 It's been less than a year since HQ Trivia launched -- and since then (around here, at least), it's hard to go a day without hearing its name.

Don't get me wrong. As a major proponent of pub trivia nights (not that I excel at them), I can see the appeal of a trivia app. But one, I thought, that is consumed passively -- perhaps while waiting in line, or in the waiting room of a doctor's office.

But no. HQ Trivia -- the live, game-show-esque, social trivia app -- does things differently.

You can only play at certain times of day: 3:00 and 9:00 PM Eastern Standard Time. You can win cash, no matter how nominal the amount. And you play with a community -- of about two million players per game -- you can engage with during the game in real-time.

But it's not just two million of your closest friends who have taken notice. Investors have, too, and as of March, the company was valued at $100 million.

What's more, certain tech giants look to be borrowing some ideas from HQ -- though they're not exactly admitting it. Facebook, for example, is adding game shows to its Watch roster, along with interactive elements that allow viewers to watch and "play along at home."

So what's the big deal? Why are so many people taking notice of, investing in, and trying to copy HQ -- and what can the rest of us learn from it?

The Genius Marketing of HQ Trivia

Prior to writing this story, I had never played HQ, though I had heard of it -- which seems to be common.

According to our survey of 478 internet users, we found that most respondents hadn't heard of HQ -- and that of those who were familiar with it, most had never played it before. 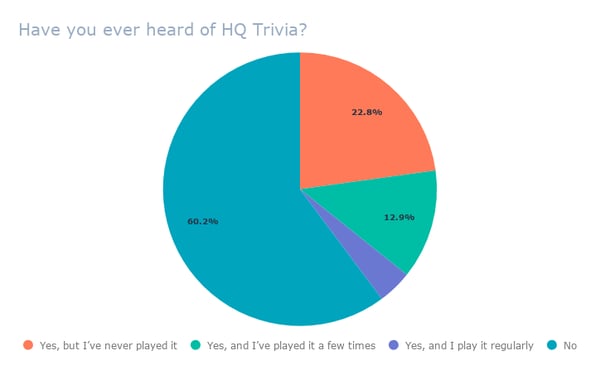 Before the games began, I asked my more HQ-savvy colleagues to share their insights. Is it worth the hype? Is it as addicting as it seems?

So maybe that has something to do with HQ's success -- the potential to win something, especially if that "thing" is as tangible as real money (instead of, say, cryptocurrency).

For each game, HQ sets a certain amount of total cash available to win, like $5,000, for instance. But that amount rarely goes to just one or two players, says HubSpot Marketing Blog Intern Swetha Amaresan -- whose friend once won $6 playing -- and is more often divided among thousands of winners.

"It's so rare that you'll win more than once -- or that you'll even win as much as $6," she explains. "It's the app's way of keeping you playing even after you win."

But the appeal doesn't end there, and unsurprisingly, the social aspects might lend itself to the app's success, too.

"It's very, very social," Amaresan tells me. "People all over the world are commenting while they're playing, and you can engage with them or see how they're doing."

And maybe, says Ye, that also adds a competitive factor to its appeal -- what she calls a potentially "weird pride thing."

So that seemingly powerful nexus -- where a social, interactive experience meets the potential to win -- isn't just anecdotal, nor is it limited to this one trivia app.

Keri Lindenmuth, Marketing Manager of technology consulting firm KDG, says that her company has seen similar success with projects that added an element of gamification.

"We've found that crowdfunding campaigns do much better when there is a game in place, because an entire community is working toward a common goal," she says. "Social sharing always helps. People like to share how well they did in a game ... which only encourages more users to get involved."

That's exactly how HQ Trivia works, Lindenmuth explains. "Players feel as if they're part of a community, and everyone loves to brag a little on Facebook or Twitter about how many questions they got right."

There was one element of the game for which I wasn't forewarned: its tendency to glitch, making many users unable to select any answer at all.

That's what happened when I set forth, with Amaresan's help, to play my very first 3:00 PM game of HQ Trivia. The app experienced a glitch, and unable to answer the most fundamental question of the game, I was eliminated from the first round.

"That was stressful," I later told her. "I feel like one of the women eliminated from 'The Bachelorette' on the first night."

But here's the thing -- neither the glitch, nor my obscenely early elimination from the game, are likely to discourage me from playing again.

That's partially because I kept watching, even after I was eliminated, and saw how many of the subsequent questions I would have gotten correct.

Aha! So it's that possibility of winning, as I mentioned earlier -- the "I would've gotten those answers right" effect -- that, for now, will keep me coming back, even if my total winnings would have amounted to $0.88. 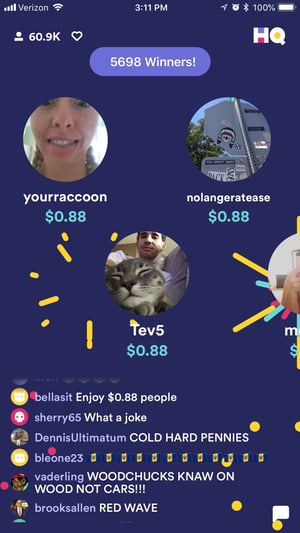 That's core to the marketing brilliance of HQ: let people participate, and give them a reason to come back -- with an incentive.

"It's engaging, and possibly addictive, for a variety of reasons," says Nate Lehoux, co-founder of competitive cash trivia app PROVEIT, "but we think that its primary appeal is actually the fact that it's almost impossible to win."

"What used to be a spectator sport is now a virtual community event. That's a huge disruption of the status quo."

So it's not winning, Lehoux says, that keeps people coming back -- which is exactly what seemed to happen with my own inaugural HQ experience.

"Losing a round of HQ creates an 'I'll show you!' mindset," he explains, "that makes players come back next time to try and beat their own previous records."

So, will I allow myself to become a glutton for punishment and tune in for the 9:00 PM game?

Well, of course. After all -- that's just one part of what makes the HQ strategy so effective.