Packaging has a profound impact on how we relate to particular products.

In a consumer taste test for 7-Up, participants reported tasting more lemon flavor when they drank the soda out of cans with 15% more yellow coloring in the package design.

The colors, textures, fonts, and compositions on the products we buy can really change how we feel, taste, and experience a brand.

Even in the age of social media, product packing and "shelf-presence" is still important for brands to get (and remain) in the consumer consciousness. For your inspiration, we've dug up the stories behind a few of the most iconic and recognizable packages, taking a look back at some of the surprising influences on their original designs.

The Stories Behind 8 Iconic Packaging Designs

If you've bought honey in the last 60 years, chances are it came in one of these friendly bear-shaped plastic bottles. It seems like the majority honey manufacturers today choose to package their product in the instantly-recognizable shape, but have you ever wondered where the idea originated?

Ralph and Luella Gamber, the founders of Dutch Gold Honey Inc., first imagined the bear-shaped container while having dinner with friends in 1957. Winne the Pooh creator A.A. Milne had died just a year before, and there was still a lot of publicity surrounding his honey-loving protagonist, Pooh Bear. "We just figured a bear likes honey, why not a bear of honey?" Ralph Gamber told the Los Angeles Times in 1997.

The Gambers never actually patented their now-iconic design, due in part to concerns that it would resemble Winne the Pooh too closely and lead to a lawsuit. "We made it look as different [from Pooh] as possible. We thought we'd be sued ... We didn't know about franchise rights or whatever," Ralph Gamber said. 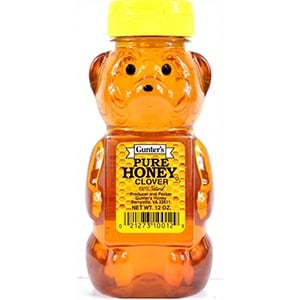 The Kikkoman soy sauce bottle is a stylish staple at restaurants, and despite its sleek, modern appearance, the teardrop design has remained completely unchanged for over 60 years.

The man behind the bottle's unique form is Kenji Ekuan, a Japanese industrial designer who dedicated his life to creating positive, useful things after witnessing the atomic devastation of Hiroshima -- where he lost both his sister and father.

Inspired by the simplicity and elegance of classic Japanese design, Ekuan and his team created over 100 prototypes for Kikkoman before arriving on the quintessential bottle we all know and love today: a refined, transparent dispenser with a neck inspired by an inverted teapot spout. 300 million bottles later, the design is still an integral part of the Kikkoman brand.

"For me it represents not the new Japan, but the real Japan,” Ekuan told the New York Times in 2012. "The shape is so gentle. Of course, during the war, we were forced into acting differently. But for a long time, some 1,000 years, the history of the Japanese people was very gentle." 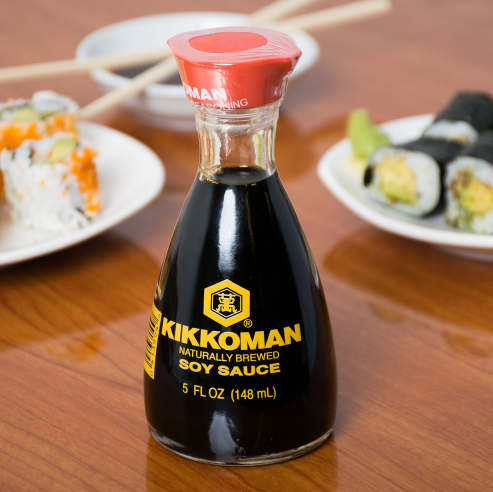 Since their first appearance in 1878, Tiffany & Co.'s simple blue boxes tied with white ribbons have become an international symbol of luxury and sophistication. Adweek even called the decidedly minimal packaging, "the most recognizable and most desired retail container in history" -- and we aren't inclined to disagree.

So what made Tiffany & Co.'s founder, Charles Lewis Tiffany, decide on this particular shade of blue back in the 19th century? No one really knows for sure, but it seems like more than a coincidence that this hue was desirable among wealthy women at the time, due to the popularity of turquoise jewelry. 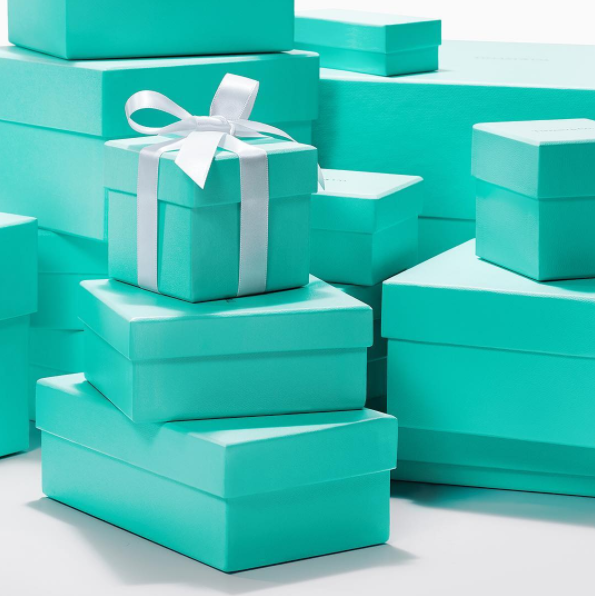 Love it or hate it, LaCroix's kaleidoscopic design certainly stands out in a sea of otherwise minimal seltzer containers. With its jazzy font and vibrant splashes of color, you'd be forgiven if you thought this sparkling water brand hadn't changed their logo since the 1990s. In reality, the current can design -- which one designer described as "swirling hangover puke" -- didn't burst onto the fizzy beverage scene until 2002.

In an effort to differentiate themselves in a crowded market, LaCroix hired Lyle Zimmerman, the head of Alchemy Brand Group -- the branding firm behind major campaigns for P&G and Coca-Cola. Zimmerman's team mocked up a few branding options and presented them to LaCroix's parent company, National Beverage.

Of the options presented, the folks at National Beverage most disliked the splashy, colorful design we all know and love today. But market research showed a completely different story: Comsumers overwhelmingly preferred this abstract neon monstrosity/masterpiece, so LaCroix ended up running with it. 15 years later, their unique design is partly responsible for their meteoric rise to the top of the seltzer space.

In a very literal example of outside-the-box thinking, Toberone's original creator, Swiss chocolatier Theodore Tobler, decided to manufacture his honey and nougat-studded bars in a triangular mold back in 1906. Tobler and his production manager, Emil Baumann, were supposedly inspired by the Matterhorn, the Swiss mountain best known for its nearly symmetrical, pyramidal peak.

There is however an alternative theory about where Tobler got his inspiration. While visiting the Folies Bergères in Paris, Tobler witnessed a cabaret show that ended with the dancers forming a human pyramid. According to his sons, this acrobatic grand finale was the real inspiration behind Toblerone's iconic shape. 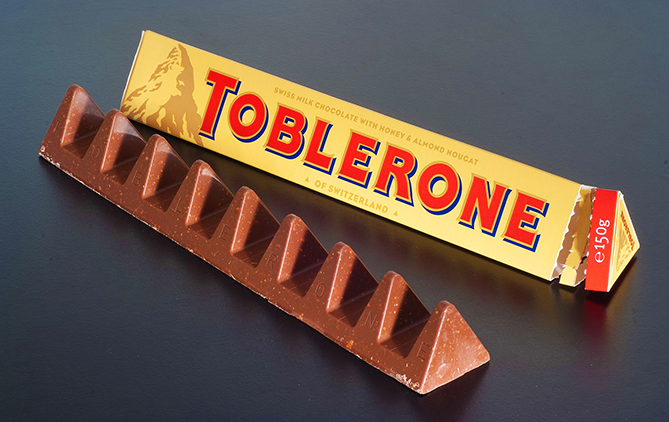 Nearly all salt comes in a round package with a pouring spout these days, but did you know that Morton Salt was the first to use this design back in 1911?

At the time, most salt packaging didn't allow for easy pouring -- especially in damp climates. If the weather was humid or rainy, salt exposed to the air would clump, making it difficult to pour neatly into salt shakers. The folks at Morton Salt designed this round package with a closable spout as a way to keep the product safe from humidity, and allow consumers to pour salt in a precise stream.

To introduce this new concept to consumers, Morton brought on advertising agency N.W. Ayer & Company, who suggested the now-famous girl with an umbrella image to illustrate that the salt would always pour -- even in rainy weather. 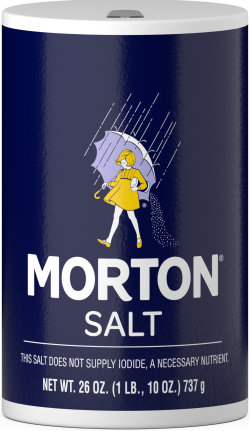 Around Valentine's Day, you'd be hard pressed to find a chocolate manufacturer that doesn't sell heart-shaped boxes of assorted truffles. But where did this tradition begin?

British chocolate company Cadbury is widely credited for introducing the heart-shaped candy box to consumers back in 1861, when Richard Cadbury was seeking a way to use the pure cocoa butter extracted during the drinking chocolate manufacturing process. He devised a completely new product: "eating chocolates," which he packaged and sold in colorful, heart-shaped boxes he designed himself.

Among the Victorian elite, chocolate was frequently given as a token of affection, and Richard's romantic boxes -- covered in illustrations of cupids and flowers -- became a popular way to give the gift of chocolate, plus a lovely keepsake box. For their major part in the commercialization of Valentine's Day, Cadbury's company experienced explosive success, and continues to sell heart-shaped boxes today.

8) Campbell's Red and White Soup Can

The Campbell's tomato soup label that Andy Warhol popularized in his series of famous pop art paintings wasn't always red and white. In fact, when the condensed soup first launched in 1897, the cans were wrapped in blue and orange.

So what caused the brand to switch their color scheme so dramatically? It turns out it was a football game. In 1898, Herberton L. Williams, the company's treasurer at the time, attended a college football game between the University of Pennsylvania and Cornell. Williams was so inspired by the red and white uniforms worn by the Cornell team, he proposed Campbell's change their packaging to match. Today, it's difficult to imagine Campbell's cans with any other color scheme. 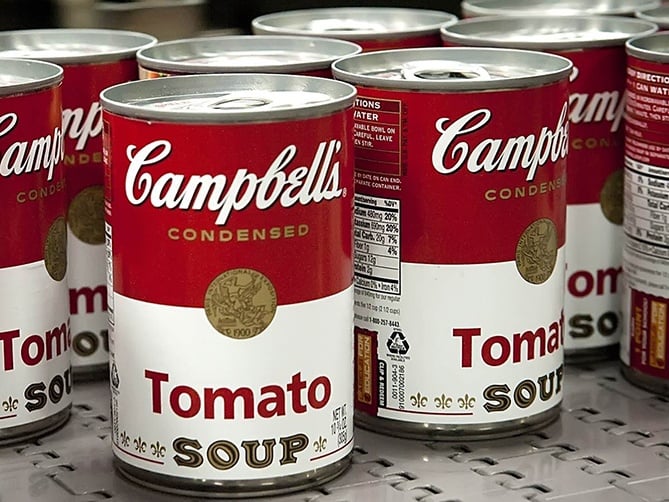