Delighting People in 140 Characters: An Inside Look at JetBlue's Customer Service Success 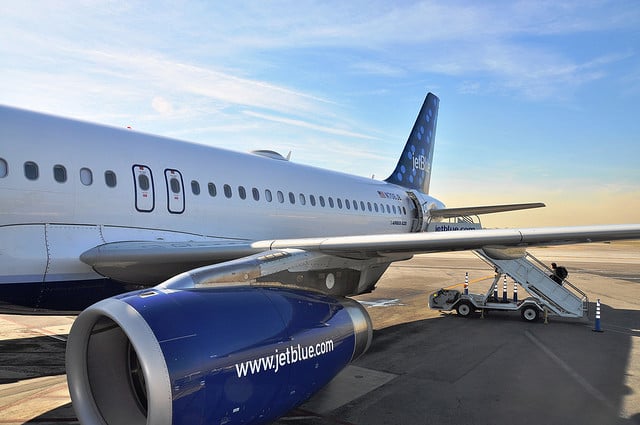 When you tweet at a company that has over 16,000 employees, how quickly do you expect them to respond to you? How helpful do you think their answer will be? And, would you expect the person who reads the tweet to follow up on the issue in person?

You may not have very high expectations for most large companies, but JetBlue has done a great job differentiating themselves on Twitter by finding clever ways to exceed our expectations.

"We call ourselves a customer service company that happens to fly planes," Laurie Meacham says. (While this phrase isn't original to JetBlue, it's been in common use within the company since their first flight in 2000 -- before it became popularized by Zappos COO/CFO Alfred Lin.)

Laurie's been at JetBlue for over eight years now and has spent the last two as Manager of Customer Commitment. I had the pleasure of sitting down with her last week to chat about JetBlue's uniquely dedicated approach to Twitter as a customer service outlet, rather than simply a social media marketing tool.

"We're all about people," she explained, "and being on social media is just a natural extension of that. It's no different than any other part of the airline."

Let me give you a taste of what she's talking about here. In January of this year, a man named Alex tweeted at JetBlue asking about their standby policy -- namely, why he would be charged $50 for getting on an earlier flight than the one he was ticketed for. Within three minutes, JetBlue had replied.

@asilbs The $50 is for a confirmed seat for our same day change policy. Standby is only allowed for the flight prior to yours.

JetBlue answered Alex's question -- and he wasn't even mad about it. At this point, most companies would pat themselves on the back and call it a job well done.

Half an hour later, Alex tweeted again -- this time about how amazed he was at the steps JetBlue had taken to provide him with an unexpectedly exceptional customer service experience.

Okay, reason # one million @JetBlue is the best. Saw my tweets & chatted with me in the terminal. #customerservice pic.twitter.com/7HYtXiAa1Z

Laurie told me this story with a smile on her face, naming it as one of the small wins that has stuck with her this year. Those small wins and acts of goodwill add up, she explained.

The employees behind JetBlue's Twitter handle aren't just social media marketers. There are three teams that tweet from the @JetBlue account: the marketing team, the corporate communications team, and Laurie's team -- Customer Commitment. Her team is made up of seasoned customer service professionals who answer customer service tweets on Twitter instead of on the phone.

Moving customer service to Twitter was a natural move for JetBlue, Laurie explained. That's where a lot of their customers were talking about them -- from thanking them for the ample legroom to asking about flight status updates.

But JetBlue doesn't just respond to everything blindly. They prioritize responding to tweets where they'd be contributing value. "We recognize how important it is to measure the ROI of our social media efforts, but we actually make a point of not measuring response rate on Twitter," says Laurie.

In other words, employees don't feel pressured to hit a response goal by sending quick responses to every single tweet that comes in. "We want our employees to engage smartly, and for the conversations to be organic and natural. We look for opportunities to add value and connect with our customers, not just respond to every single mention that comes our way."

And with 2,500-2,600 Twitter mentions every day, you can bet JetBlue has people working hard to cover their social media accounts 24/7 and read every single tweet that comes in. And, impressively, they average a 10-minute response time. I tested this out myself before boarding my JetBlue flight last weekend. Sure enough, the Saturday night team responded in 10 minutes on the dot. 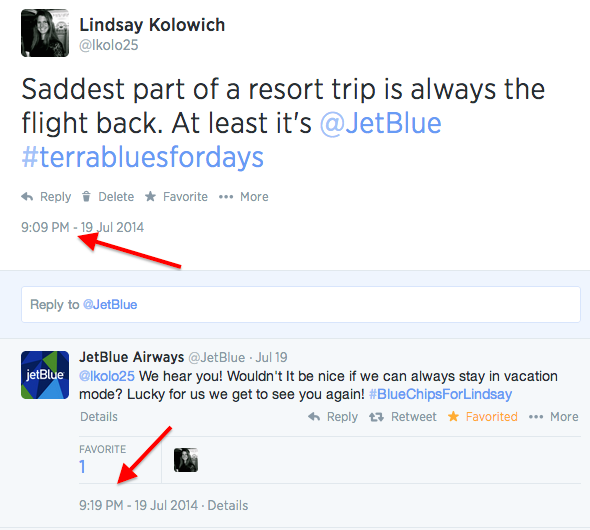 Even though I didn't have a question or complaint for them, the response added a little sunshine to my day -- and that is a form of value in and of itself.

Believe it or not, JetBlue didn't always have a big support team behind their tweets. It wasn't until 2009 that JetBlue customers started asking too many customer support questions on Twitter for the small team to handle without help. At that time, JetBlue was nine years old and there were only four people fielding @JetBlue mentions.

But between May and August of 2009, something kind of crazy happened: @JetBlue's Twitter follower count doubled from 500,000 to over a million in just a three-month period. The customer support questions were pouring in, and to keep up, the customer commitment team knew they'd need to scale the team.

Almost immediately, the team requested headcount to help field questions and monitor the social media accounts around the clock. They looped in the JetBlue leadership team and educated them on what customers were saying and asking on Twitter -- and the value of JetBlue's Twitter responses back to their customers. It helped that responding to these tweets probably deflected some calls to the 1-800-JETBLUE contact center.

Once they were approved for hiring, the question became: How do you hire a relatively large group of people who care as much as the current team does? Where do you find high quality customer service people who are familiar with the airline industry and can learn to emulate your smart-and-witty voice?

For JetBlue, the answer was hiring from within. They sent out an internal call for job openings and hired only people who were already trained customer service agents with JetBlue. Five years later, the team is 25 people large.

Communicating and Collaborating From Great Distances

These 25 employees are all based in Salt Lake City, Utah, and they represent every single JetBlue flight on Twitter. To mitigate communication challenges, JetBlue set up a robust internal network to keep all social media teams informed and get information to and from every airport efficiently.

To keep everyone in the loop, one JetBlue team member is responsible for preparing and sending out an internal newsletter to the social media teams at about 5:00 A.M. every morning, which outlines current promotions and news they might get questions or comments about on social media.

Employees also share an ongoing thread where they can ask questions, share stories, and tag other people in the organization so issues can be fixed as quickly as possible. "Yesterday, a customer tweeted at us about an event JetBlue was sponsoring that the social media team wasn't aware of," Laurie told me. "In less than a minute, he confirmed with one of our PR people that we were sponsoring it, and he could tweet back to the customer a few minutes later." They also use phone, email, and instant messaging to communicate with one another.

If a specific airport gets mentioned, members of Laurie's team send an email to customer service representatives at the corresponding airport. Once the Salt Lake City team responds to the tweets, it's up to the teams at each airport to take it further if they choose to.

"The biggest wins this year are stories coming out of Boston," Laurie told me. JetBlue has the most flights out of Boston than any other airline. "Our Boston team is our most engaged team. Really, it's the people who work there that make it so special."

Take JetBlue customer Alexa, for example. She jokingly tweeted that she expected a welcome parade at the gate when she returned home to Boston. Laurie's team in Salt Lake City responded:

But when the JetBlue folks in Boston saw that tweet, they took it to another level -- and ten of them greeted her at the gate with signs, smiles, and marching band music.

Because hey, why not?

Laurie told me about another time this year, when a customer tweeted at JetBlue that he was about to board his 100th JetBlue flight that year. He didn't mention where he was flying to or from, but Laurie's team grabbed his name from Twitter and looked up where he was flying out of. It turned out to be Boston, and the Boston team greeted him at the gate with cupcakes and a banner.

It's magical gestures like these that set JetBlue apart from many other big brands, let alone other airlines. Sure, other brands answer customers' questions on Twitter, but how many of them have dedicated customer service professionals behind their Twitter handles? And how many of them use these Twitter conversations to delight in the real world, too?

But as you can imagine, it's not always rainbows and butterflies in the airline industry. Not only are airlines heavily regulated, but there are a lot of moving pieces involved in giving customers great experiences. Plus, let's face it ... air travel isn't exactly fun and sexy.

I asked Laurie about a big challenge her team has faced this year and how they responded to it. She told me a story from earlier this year when JetBlue -- and all airlines -- had major disruptions to their schedules because of winter storms in early January. Flight delays and cancellations seriously impacted thousands of people, including those who were traveling home from vacations.

Customers were displaced, plans changed, and many travelers couldn't get home for days -- and when that happens, they often take to Twitter. "Our volume of Twitter mentions went way up," said Laurie. "We couldn't change the weather, we couldn't make conditions safe to fly, and we couldn't get them where they needed to go. But what we could do -- and did do -- was keep people updated on what to expect."

And sometimes, the team just has to accept the hits. And during large-scale events like those winter storms, there can be many hits. But Laurie's team empathized with their customers on Twitter, informed them, and tried to help whenever they could.

"But we also don't apologize to everyone," she said. "We’re definitely sorry they’re having to deal with this, but ultimately, there are reasons that flights get cancelled and if we ignore those reasons, we’re putting everyone at risk. Also, apologizing to everyone just makes us look apologetically sad and like we may not have a handle on things, when the truth is, we’re doing all we can to get people where they want to go."

JetBlue has had their fair share of crises like any other airline, and it's something Laurie talks about with the team frequently. "Social media is powerful and things can go south so quickly, so we talk to the team all the time about how to respond appropriately, when to blow the whistle, when to contact Corporate Communications."

Despite these challenges, JetBlue maintains a 79.1% on-time arrival rate, and a customer complaint rate of just 0.79 out of every 1,000 passengers. They're right at the top of the industry.

Looking at the Future

I asked Laurie about branding initiatives from here on out. "We're doing more with social media content, especially on Instagram and Facebook," she told me. She and her team will be experimenting with what resonates with customers on those platforms, so keep an eye on their Instagram and Facebook accounts.

In the meantime, her team of 25 will continue working around the clock to reply to customer tweets with the same dedication their customer support teams respond to customers on the phone. They've certainly set the bar high in the airline industry -- they now have 10 consecutive J.D. Power & Associates awards for "Highest in Customer Satisfaction Among Low-Cost Carriers in North America" -- and we hope to see other brands take the hint from JetBlue's Twitter successes and make similar customer service efforts going forward.