How to Handle Manipulative Coworkers, Managers, and Clients Like a Pro 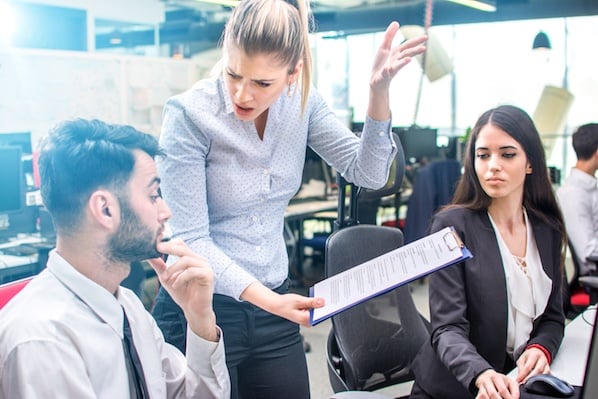 At one point or another in your career, you’ll encounter a manipulator.

Unfortunately, people who use manipulative tactics to get what they want aren’t just in movies like The Devil Wears Prada -- they exist in real life, too.

It’s often difficult to spot a manipulator. Manipulative behavior is inherently sneaky and dishonest. Perhaps your manager undermines you in meetings, but then tells you it’s necessary for your career growth. Or, maybe you’ve noticed manipulative behavior playing out on your team recently, with a higher-level coworker blaming junior-level employees for mistakes that weren’t their fault.

You might even recognize manipulative behavior in the client you’re working for, who often lies to you about his colleague’s wishes in order to get what he wants.

A manipulative person is someone who uses dishonest, devious, or calculated measures to control other people or situations to their advantage. Someone who is manipulative will attempt to achieve their desired goals through lying or influencing other people’s emotions.

While manipulative behavior might seem like just “petty office drama,” it isn’t, and it can have negative and far-reaching consequences on your team’s culture and productivity.

Over time, manipulators can inhibit coworkers from doing their best work, and create a toxic and self-serving culture. It can demoralize your team, and lead to higher levels of employee turnover.

Fortunately, there are a few initial tactics you can try before reaching out to HR or considering more drastic action. Ultimately, it’s imperative you learn how to spot manipulative behavior among your employees or coworkers, and determine the best course of action to help your team operate with openness, honesty, and mutual respect.

It can be difficult to spot manipulative behavior, particularly if you’re the one being manipulated. The manipulator might compliment you often, or try to get close to you, so you don’t recognize when this “friendly” behavior becomes threatening to your work life.

Here are a few classic signs of manipulation:

It’s important to note manipulative behavior doesn’t necessarily mean someone has a manipulative personality. It’s likely we’ve all, at one time or another, put our own needs before someone else’s, and used manipulative tactics to make sure we got what we wanted.

Think about your childhood. Let’s say when you were younger, you really wanted the last cookie. You knew your sister loved Santa Claus, so you told her, “If you let me eat this last cookie, Santa Claus will still come. But if you eat it, he won’t come and he won’t bring you any gifts.”

By knowing your sister’s weakness, you were able to lie to her to get what you wanted. This is a manipulative behavior, but it doesn’t make you a manipulative person.

In the workplace, people make mistakes. Certain situations might encourage less-than-ideal responses, and your coworker might use manipulative behavior in a moment of crisis or desperation. While this is never okay, it’s often reversible if handled appropriately.

It’s important you learn how to identify if your coworker, manager, or client has a manipulative personality -- which is different from occasionally exhibiting manipulative behaviors.

Ultimately, someone with a manipulative personality is someone who often, and repeatedly, uses strategy and calculation over truth and ethics. They put their own needs first, and use your weaknesses against you to ensure they get what they want.

Essentially, someone with a manipulative personality is someone who exhibits the aforementioned manipulative behaviors, but displays them in various situations or with different people, often.

You’ll likely identify someone with a manipulative personality when you feel a disparity between your actions and your morals when you’re around them.

For instance, maybe you swore to yourself you’d never willingly steal a project from a coworker, but then the manipulator guilts you into it or tells you she can’t possibly do it herself. Perhaps the manipulator points out your flaws and insists you overcome them by doing her this favor. You’re uncomfortable and don’t believe it’s the right thing to do, but she convinces you anyway.

If your comfort takes a backseat to the other person’s wishes, or if you feel that person is encouraging you to do something unethical, you are probably dealing with someone with a manipulative personality.

How to Deal With Manipulative People

1. Call it out privately and attempt to get to the bottom of it.

If you see the behavior occur during a team meeting or in the hallway, but it’s the first time you’ve noticed it, you might consider initially calling out the manipulator in private.

For instance, let’s say your employee James has become close with another employee, Rebecca. He often undermines her and “jokingly” points out her flaws during meetings, which you see as both inappropriate and detrimental to Rebecca’s confidence and ability to openly offer her ideas.

You might start by calling James into your office and saying, “James, what is going on here? Do you have an issue with Rebecca or is something about her work behavior bothering you?”

It’s important to directly call attention to James behavior and acknowledge that it’s unacceptable, while initially giving James the benefit of the doubt. You want to try to get to the bottom of his behavior. Perhaps you’ll find that James is angry or frustrated with Rebecca, and while his reaction to his frustration isn’t appropriate, it creates a fuller picture for you.

Of course, James might lie or play dumb, but as a third-party viewer to the manipulation, it’s critical you take initial steps on behalf of Rebecca.

2. Call it out publicly to show it won’t be tolerated.

Calling a manipulator’s behavior out in public will do two things -- one, it will diminish opportunities for the manipulator to lie or play dumb about the situation, and two, it could earn you some allies. Additionally, it shows everyone what’s really going on.

For instance, maybe your coworker purposefully left you out of a project meeting and then gossiped to coworkers that you weren’t pulling your share. If this is the case, you could email the manipulator, cc’ing your boss and teammates, and include information you would have shared in the meeting. End the email by asking to please be included in the next meeting.

Ingrid Goldbloom Bloch, principal at Mosaic Career Services in Boston, advises being "really transparent in your communications." You want your manipulator’s actions on file as much as possible, so if the time comes, you can show various paperwork to protect your own career. You don’t want your boss hearing you have begun skipping meetings when really, you were never invited.

If the behavior happens in public, such as during a meeting, you might turn to the manipulator and say, “Your comment makes me think you don’t like the solutions we’ve offered during this meeting. Is this true?” By pointing out the behavior you’ve shown it won’t be tolerated and will continuously be questioned if continued.

3. Take your concerns to someone higher up.

Manipulative behavior puts your team’s work culture and productivity at risk, so it’s important, if the behavior continues, that you let someone higher-up know.

Bring objective facts and situations to your boss or director’s attention. Point out how the manipulator’s behavior has hindered your team’s ability to complete a project or cultivate a strong relationship with a client.

For instance, maybe your manager continues to take the credit for your team’s work during meetings, even though she privately applauds you. If the problem is persistent, you might mention to a higher-up that by taking undeserved credit, your manager is deteriorating your team’s morale.

If you keep the conversation business-related, your boss or director will likely see the critical nature and intervene.

4. Invite a mental health professional to your workplace.

If you feel that manipulative tactics have begun infiltrating your team or workplace culture, it might be time to hire a professional to identify these behaviors for you.

A mental health professional who specializes in dealing with manipulation can help you identify manipulative behavior, and can observe relationships between colleagues and make unbiased assessments. The professional can also consult and train your team and provide long-term preventative and management solutions to the problem.

Ultimately, if the manipulator is under your leadership, you’ll need to provide consistent behavioral feedback until they stop their behavior, or make it clear to them that they won’t be tolerated at your company.

MBO (Management by Objectives): Everything You Need to Know

Why Self-Awareness in Leadership is a Must-Have for Success