Why We’re Thinking About Messaging Apps All Wrong

If you start to feel the low burn of anxiety rising in your gut whenever you hear about messaging apps like WhatsApp and WeChat, take comfort -- you're not alone. Much of the coverage on messaging apps to date has been accompanied by a mixture of sheer awe at their velocity and the oddly foreboding tone of a teenage dystopian blockbuster.

I asked Eytan Oren, CEO at a consultancy that specializes in messaging apps called BlockParty, why he thinks that is: "The growth of the ecosystem took a lot of people by surprise -- especially in the U.S. where chat apps took longer to catch on. At this point there are more people on chat apps than traditional networks, and though that shift was several years in the making, some people experienced it as an overnight success," he explained.

"There's also a level on which people may have grown comfortable with a small pantheon of "social media" leaders -- Facebook, Twitter, Instagram, and Pinterest. All of a sudden you have a dozen chat apps with hundreds of millions of users to consider on top of those traditional outlets, and it can be daunting to know where to start."

Whether it's the arrival of something we don't yet understand or unease over the sheer volume of users each of these messaging apps have accumulated, the tone around messaging apps is reminiscent of the restlessness that accompanied the emergence of social media 12 or 13 years ago. So what does that mean for marketers? Well, let's take a closer look.

What Exactly is a Messaging App?

At their core, messaging apps enable one-to-one or one-to-few interactions in a fast, often cost-free way.

Skype and Blackberry Messenger are commonly thought of as the "grandparents of messaging apps," which today number in the hundreds. The largest messaging apps in the world include WhatsApp, Facebook Messenger, WeChat, Viber, Line, and Snapchat. Each of these have their own regional and demographic stronghold. The graphic below from BlockParty demonstrates their scale: 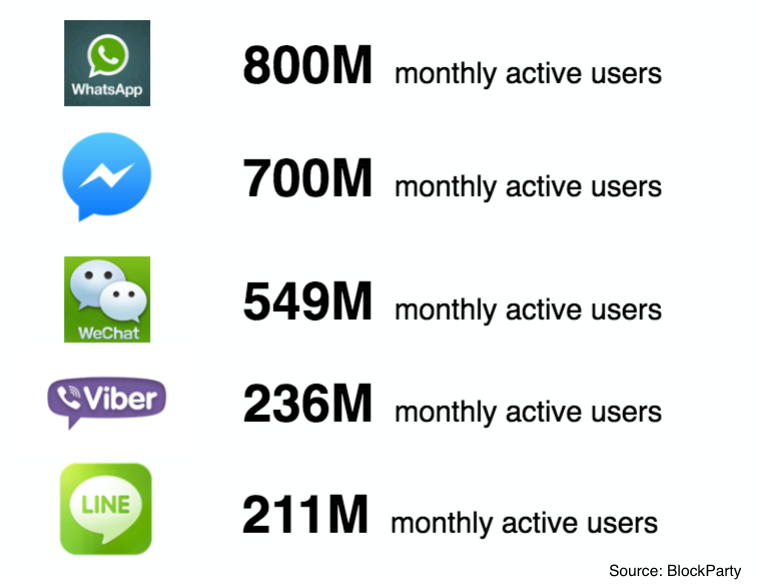 You cannot talk about messaging apps without addressing their rapid growth of adoption. According to GlobalWebIndex, 75% of internet users today use some sort of a messaging app.

Research from Business Insider shows how quickly messaging apps have caught up to and surpassed social media network usage. Their chart below compares WhatsApp, Facebook Messenger, WeChat, and Viber to Facebook, LinkedIn, Twitter and Instagram. Oh, and by the way, it's measured in billions - with a B. So the top four messaging apps have 2.125 billion monthly active users worldwide. Which leads me to the next question: Is all this hoopla -- billions and billions in monthly usage, exponentially growing articles, and spiking public attention -- really just over the ability to send tiny little messages?

Likely not. Read on, my wise and good-looking visitor, read on.

How Are Messaging Apps Different From Social Media?

Part of understanding the import of messaging apps is zeroing in on what makes them different from traditional communication channels such as broadcast or social media.

If social media removes the barriers for people to broadcast messages out to an audience of many, messaging apps remove the barriers for people to interact one-on-one. And what are those barriers? Data plans for starters. One reason messaging apps spread so quickly with younger generations is due to the fact that they became known as the free alternative to text messaging. Whether you are talking to someone across the street or across the globe, most messaging apps enable you do to do so over WiFi without cost or impact on your mobile data limits.

Privacy concerns is another barrier messaging apps seem to address. For a generation that grew up with the highly public nature of social media, messaging apps offer a shade of privacy to talk with one or a group of your friends away from the public eye. Having private or semi-private channels for communication is of increasing importance, particularly as you look beyond messaging into a wider array of transactions. Which leads me to the next point ...

If you think of messaging apps as just another form of text messaging, you may be missing the larger picture.

We have a bad habit of naming things before we really understand what they're capable of. We did it with social media. Early on we named Facebook, Twitter and similar sites "social media" because "media" was the only framework we had for mass communication. And that name colored our interpretation of it.

"Why would I want to know what you had for lunch?" Was the common retort against Twitter, for example.

The reason so many initially missed the point of social media was that they looked at it through the lens of traditional media, and "media" had historically been reserved for essential and polished information at the time. All the news that's fit to print. But social really wasn't media in the traditional sense at all. It was something entirely new. It opened up millions of simultaneous platforms and angles from which to see and report on the world around us.

Today messaging apps are starting to evolve to include video, images, and even financial transactions. Everlane and Zulily use Facebook Messenger to take orders and process returns. The companies leverage an integration between Messenger and Zendesk to funnel messenger requests directly through their support channels.

What Everlane, Zulilly, and Zendesk are doing is just the beginning. Rare Pink, a Jeweler in London, is using WeChat exclusively to communicate with about 10% of its customers. Hotels like LINQ in Las Vegas are also opening up messaging apps for fast check-in and to enable guests to adjust the lighting and temperature in their rooms. 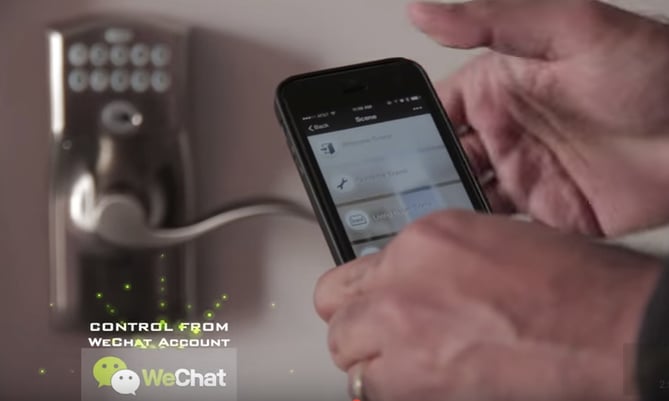 A guest of LINQ hotel opens their suite door with WeChat

Promoting an open API for anyone wanting to build apps or integrations into it, WeChat has been quick to develop new use cases for messaging. As a result, they're seeing it seep into every aspect of users' lives.

For more than 500 million users in China, [WeChat is] essentially The Everything App. People use it to talk with their friends and their colleagues, and also to... book train tickets and get their laundry done, order dinner and play the lottery, pick out clothes and play videogames. It’s the remote control for your smart home, a mobile bank, and a way to renew your visa," explains David Pierce, senior staff writer at Wired.

You can, for all intents and purposes, live your entire life within WeChat. It takes a phone full of apps to replicate its entire functionality."

Let's go over that again: "It takes a phone full of apps and replicates its entire functionality."

So maybe the above chart comparing social media networks and message app usage is the wrong idea. Maybe we shouldn't be thinking about messaging in terms of apps at all, but rather as an evolving infrastructure.

Where Do We Go From Here?

There was a time when social media was a perplexing newcomer to our lives. Today it's hard to imagine an election season or a winter storm or an episode of the Bachelor without an accompanying hashtag. Social changed the way we absorb the world around us -- from the trivial to the momentous. It took years to find its place, but it's indelible now.

When we think about messaging apps, we ought to think about not what they are today, but what they could be -- what their underlying functionality makes possible -- down the line. A recent report by the Tow Center for Digital Journalism paints this picture well: "While messaging is currently a clearly defined function of specific apps, the future is likely to be one wherein the capability is baked-in to nearly all digital technologies and services. The point where a messaging app begins and ends will begin to blur," they explain.

When you look at the unique ways in which companies like Everlane, Zendesk, and LINQ are starting to use messaging apps, it's not hard to see how this permeation could begin. We're a ways off still, but it's possible to imagine a time when messaging apps will be so widely used they will become indistinguishable from any other mass utility. As NeimanLab's Joseph Lichterman predicted, "Soon messaging will become like electricity -- ubiquitous and involved in nearly everything we do."

What do you think are the possibilities for messaging apps in your industry? What would it take for them to gain traction as a marketing, sales and service channel within your business? Share your thoughts below.