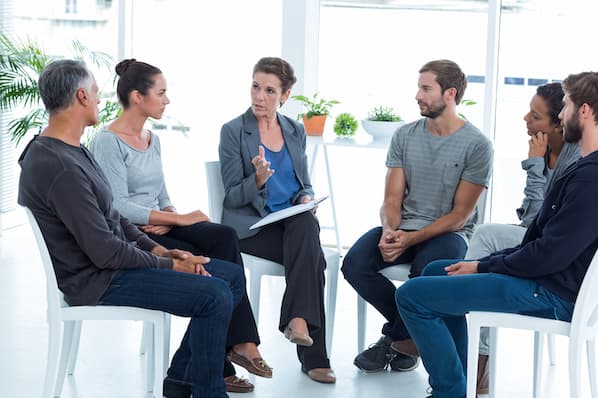 If digital and traditional marketers faced off in a debate about whose promotional philosophy is superior (which would probably get more heated than an NSYNC versus Backstreet Boys dispute), one of the points digital marketers could hang over traditional marketers' heads is their ability to measure a campaign's performance -- and their opponent's inability to do the same.

Whether its views, social shares, scroll depth, subscriptions, leads, and sometimes even ROI, digital marketers can measure it all. But even though we have access to a laundry list of metrics, we still can't measure what is arguably the most crucial indicator of a campaign's performance -- emotional resonance.

Don't get me wrong, I love seeing a spike in traffic as much as the next blogger. But in an industry where skimming a page for 10 seconds counts as a view, leaving your desk to grab some string cheese will result in a time-on-page of five minutes, and 50% of web traffic and engagement are generated by bots and Chinese click farms, claiming digital metrics are a surefire way to gauge your content's emotional impact is a stretch.

But what if we could actually measure emotional resonance? What if we could place a resonance score next to a piece of content, just like we do with views? Interestingly enough, there are companies spearheading this movement and developing technology that can gauge people's emotional response to your content without needing to draw blood or scan any brains.

Neuromarketing blends neuroscience and marketing to help brands gauge the emotional resonance of their current and future marketing campaigns. To do this, companies like Immersion Neuroscience and Spark Neuro have developed technology that can gauge certain neurochemical and physiological responses, which both signal emotional engagement while consuming marketing content.

In 2017, Immersion Neuroscience developed the INBand, an armband that can measure your brain's oxytocin levels by tracking the cadence of your Vagus -- a nerve that controls your heartbeat. 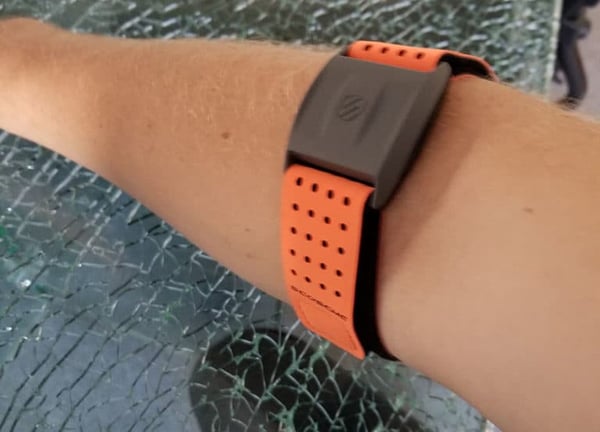 Oxytocin is known as the empathy chemical. When it's coursing through your brain, you relate to others more, care about them, and feel an urge to help them. And when your brain synthesizes the chemical while consuming marketing materials, it's one of the best indicators of emotional engagement and, in turn, quality content.

In 2018, Immersion Neuroscience wanted to compare people's oxytocin levels while they watched Superbowl ads to their self-reported preference of the same ads. So they hooked eight people up to the INBand and measured their neurochemical responses to 17 ads from the 2018 Superbowl. Then, they compared each ad's immersion scores to their ranking on USA Today's Ad Meter, which is ranked by the public.

What they found was quite shocking -- their results were almost the complete opposite of USA Today's Ad Meter rankings. In fact, the ad that generated the most emotional engagement in the study was ranked the least popular ad in USA Today's Ad Meter.

Immersion Neuroscience's findings suggest that knowing what the brain actually resonates with is much more important than knowing what people say they like, especially when you test ideas in focus groups -- participants are prone to shielding their true opinions due to groupthink and the urge to please authority figures.

So to accurately gauge our content's emotional resonance, and in turn, its ability to grab people's attention, make them feel something, and compel them to act, we need to focus more on neuroscience and less on web metrics and in-person interviews.

However, even though leveraging neuroscience to inform your marketing strategy is an ideal and exciting opportunity, the tactic still seems more suited for a time where Black Mirror storylines are a reality.

In fact, one of the main questions people have is, "Is neuromarketing ethical?"

Below, let's dive into that question.

While the purpose of neuromarketing is to determine how consumers respond to brands or campaigns, a rather innocuous study, not everyone is convinced that it's ethical.

In and of itself, neuromarketing isn't unethical. However, it's important that companies hold themselves to a high standard of ethics when studying their consumers.

For instance, brands shouldn't intentionally promote anything that's harmful, deceptive, or illegal. Additionally, you shouldn't study minors to figure out how to hook them on a product.

Neuromarketing should be used to create effective ads and eliminate ads that just don't work, and that's all.

In actuality, neuromarketing has already permeated into the content space. Netflix, Hulu, and some television networks use neurotrackers to predict how successful their shows will be -- at an 84% rate of accuracy -- and this methodology could soon seep into the marketing industry.

To help you envision a world where neuromarketing is widespread, here are five practical ways brands can nail their marketing with the help of neuroscience.

When Shane Snow, an author, journalist, and co-founder of Contently, first tried out the INBand to see what the neuromarketing fuss was all about, the CEO of Immersion Neuroscience, Dr. Paul Zak, played this advertisement for him:

After Shane finished watching the ad, he started tearing up. But as he wiped away his tears before Dr. Zak could see them, he realized it was a lost cause -- the INBand had already revealed that the ad made him cry. 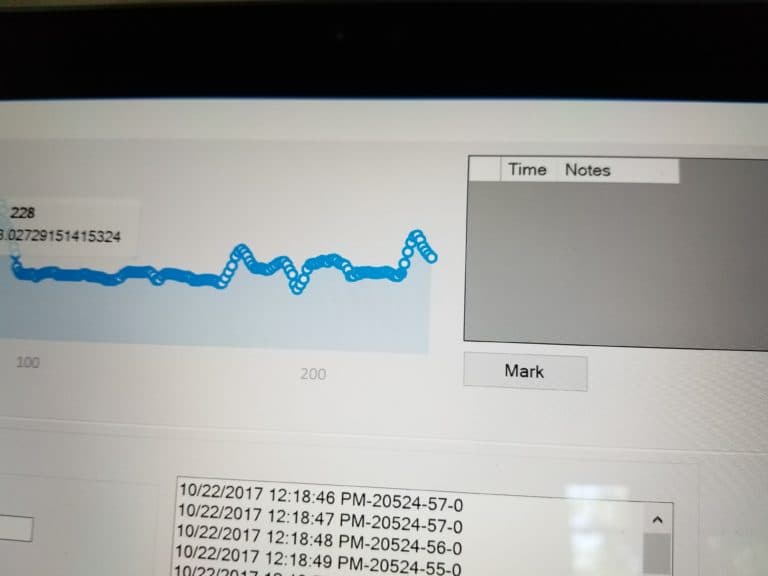 At each point of the ad where the father gets rejected, the corresponding points on the graph show that Shane experienced bursts of emotion because he developed empathy for him. And at the end of the ad, you'll notice a corresponding spike in emotion on the graph that shows exactly where he cried. The ad's emotional effects even bled over to Shane's reality, making him feel empathetic toward the father after the ad ended, which is evidenced by the last spike's gradual fade.

Shane's emotional response to this ad suggests that telling great stories, chock-full of conflict, surprise, and emotion, is one of the best ways to trigger the release of oxytocin, helping you emotionally engage your audience and, ultimately, make them care about your brand.

In a nutshell, great stories are about the journey of overcoming adversity and how that journey changes people. “Little Moments,” tells the story of a father who so desperately wants to connect with his teenage daughter but ultimately can't make it happen. And at the end of the ad, her constant rejection clearly weighs on him, prompting him to lay down on her bed. But that's when he sees all the photos they've taken together over the years taped above her bed, making him realize that she's always had a connection with him -- he just didn't know it.

2. Brands can save millions of dollars on ads.

In the same study of 2018 Superbowl ads mentioned above, Immersion Neuroscience discovered that M&Ms' “Human” was the second most immersive ad on their list.

As you can probably predict, “Human” generated the most emotional engagement when the truck plows Danny DeVito into the basket of produce. But a few seconds after this shocking and hilarious climax, Immersion Neuroscience discovered that emotional engagement plummeted, suggesting M&Ms could've shaved off the last 10 seconds of this ad -- and saved over $1.5 million.

At a major global conference in Houston last year, Immersion Neuroscience put INBands on attendees and measured their immersion during certain presentations. They discovered that concise, energetic talks generated the most emotional engagement.

On the other hand, longer talks need to revolve around a strong narrative or else they can't hold an audience's attention. Additionally, they realized the brain responds well to multimedia-heavy presentations due to the high variety of stimulus.

Based on these findings, Immersion Neuroscience believes tracking attendees' emotional engagement during presentations can help companies refine their conferences by cutting out boring talks and even providing attendees with relevant presentation recommendations.

The main goal of neuromarketing is to gain insight into what would make an ad more effective. That's exactly what Roger Dooley did in a study using an ad for baby products.

To figure out if an ad was effective, Dooley used a heat map to see where viewers were looking. Are they reading the text? Just looking at pictures? 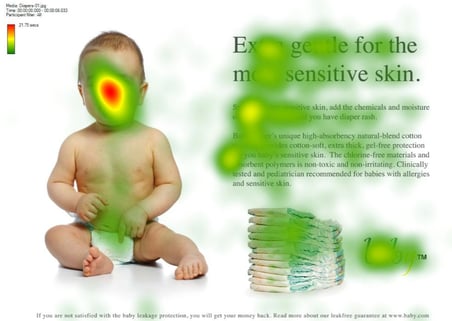 However, when you have the baby "look" at the headline and copy, viewers started to give the copy more attention. That's because people will look at the same thing the models are looking at. So, with the image above, where the baby was looking right at us, you weren't directed to look at anything else, so you probably stopped looking around. 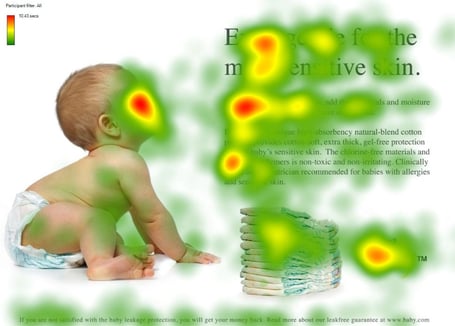 Ultimately, this neuromarketing study helped create a more effective ad. In your future ads, try to make sure your models are looking at what you want the viewer to see.

The fear of missing out, otherwise known as loss aversion, is a widely used tactic in marketing and sales.

In fact, in a study, 62% of consumers were more likely to gamble their money than to lose their money.

Here's the scenario consumers were given:

If you were given $50, would you rather:

When an experimenter posed that question to subjects, 43% of the subjects chose to gamble. Then the options were changed to:

With that slight change, there was a 44% jump in the number of people who gambled.

In fact, when more studies were done like this, 100% of subjects gambled more when the other choice was framed as a loss.

The neuromarketing takeaway is that framing will have a large impact on peoples behavior. And people are loss averse.

You can implement this method by changing the language on your ads. If you can pose the outcome of not buying your product or service as a loss, then you can sell more.

Even though we live in an age of data overload, where you can measure almost anything, Google Analytics will never be able to accurately gauge the most important element of your marketing campaign -- its ability to make your audience feel something.

Fortunately, the neuromarketing space is rapidly evolving, and its technology is becoming more affordable and practical for marketers today, hopefully leading to its mainstream use tomorrow.

5 Examples of Sensory Branding in Retail

How to Cultivate Psychological Safety for Your Team, According to Harvard Professor Amy Edmondson